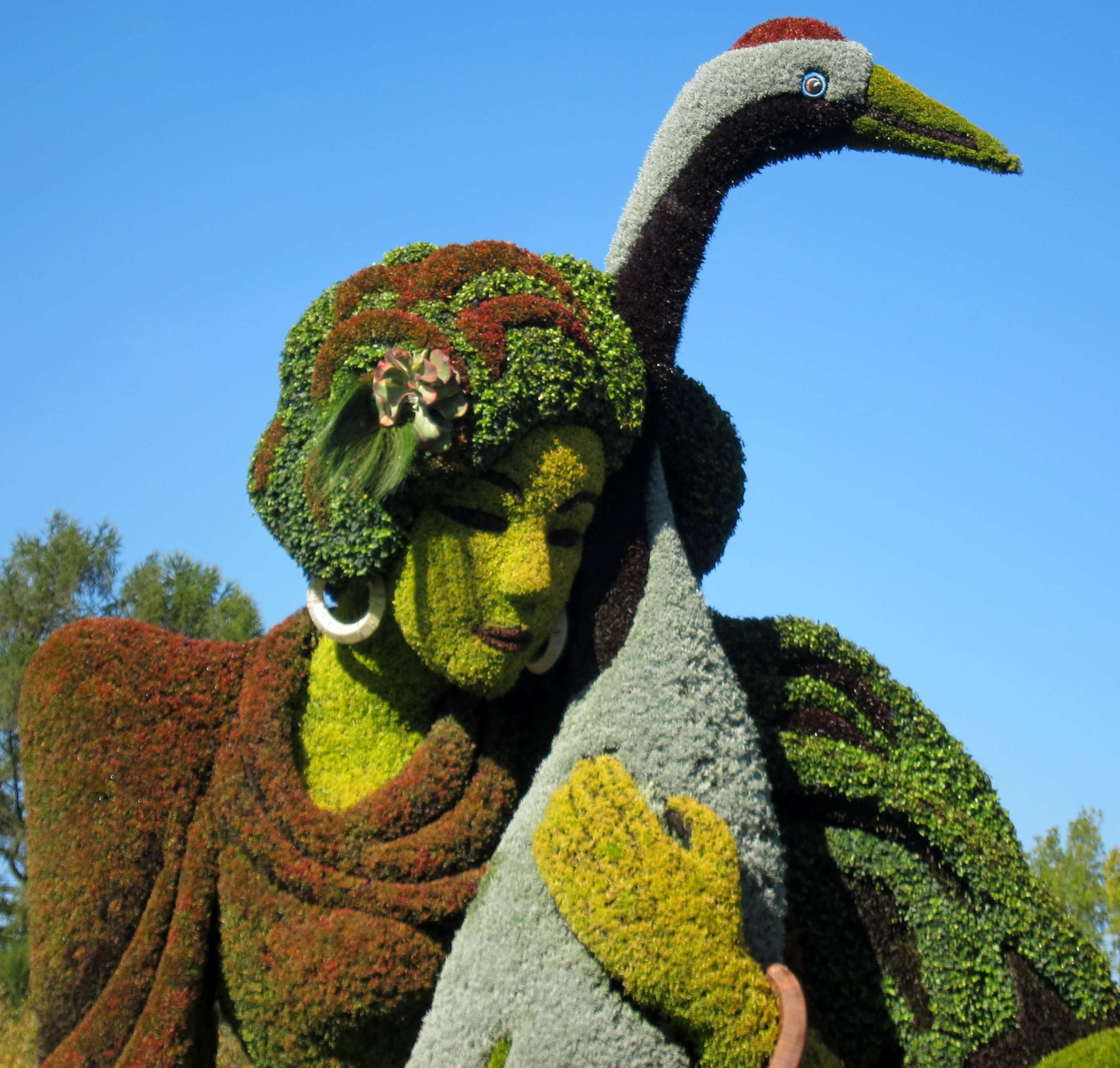 The Walleighs’ 2013 road trip was with good friends with whom they had traveled in New Zealand. In late September 2013 they flew to Quebec City then drove to Montreal, and Niagara-on-the-Lake and the Canadian Niagara Falls in Ontario Province. Go the Quebec City, Western NY, and Hudson Valley for details on the New York portion of this trip.

Montreal integrates both French and English Heritage. Compared to Quebec City, though, it feels less “foreign”.  However, they did enjoy the unique Botanical Garden exhibition of huge plant sculptures.  Topiary is too small a term for the huge displays of botanical creativity which had last been displayed in Canada a decade before, so they were lucky to catch this amazing exhibition on its last weekend.  They walked around the old city and took a night-time buggy ride with Jacques, our driver, and Baltazar the horse.

1,000 Islands along the St. Lawrence River–an unusual part of the U.S. and Canada border. As a pleasant break during the road trip’s longest drive between Montreal to Niagara-on-the-Lake in Ontario Province, at the village of Ivy Lea, they

boarded the Gananoque (gah-nah-NOCK-we) Boat Line for a 1-hr cruise. The huge river was beautiful here, with 10s of islands visible during just the brief ride. Many islands were so small that they barely had room for one house–1 was so small the house looked like a large boat with just 1 room. Since some islands are in U.S. waters and some in Canada, when it wasn’t clear which was an island’s connecting country, the land mass was divided approx. evenly. In the case of 1 island pair, a bridge linked the U.S. island to the Canadian island.

Canadian Niagara Falls– more dramatic than the U.S. side. From their Niagara-on-the-Lake, Ontario B & B, The Globetrotters, they left at 10am to enjoy their Canadian Niagara Falls Adventure Passes. Walleighs and friends immediately lined up for the Maid of the Mist ride, donning blue plastic ponchos, since they could already feel the spray from the falls while waiting for the boat–in a sea of blue-plastic-covered people.  Once they boarded, they dashed to the front of the top deck for the best view and chance of getting wet, like a front row at an aquarium show knowing you’d get drenched.  The boat closely approached the American side of Niagara Falls, much shorter than the Canadian horseshoe-shaped falls.  Then the boat cruised almost under the Canadian falls, deep into the mist spraying up, much closer than Wendy remembered as a 12-year old kid. The next attraction, Journey Behind the Falls, was disappointing since no one could get no closer than about 15 feet from the overlooks next to and behind the falls.  The Walleighs drove to the White Water Walk, the final attraction of the Adventure Pass, along the Niagara River. It was quite impressive viewing probably 1/2 mile  of Class 6 rapids which would have been more worthwhile if it had been free. On the drive back to Niagara-on-the-Lake, they stopped at Inniskillin Winery known for “ice-wines” which are in essence “condensed” wines made from late-season-picked white or red grapes, so are sweet, fruity-dessert wines.  They might have bought a bottle if it weren’t $50 to $120 per 12-oz. bottle!