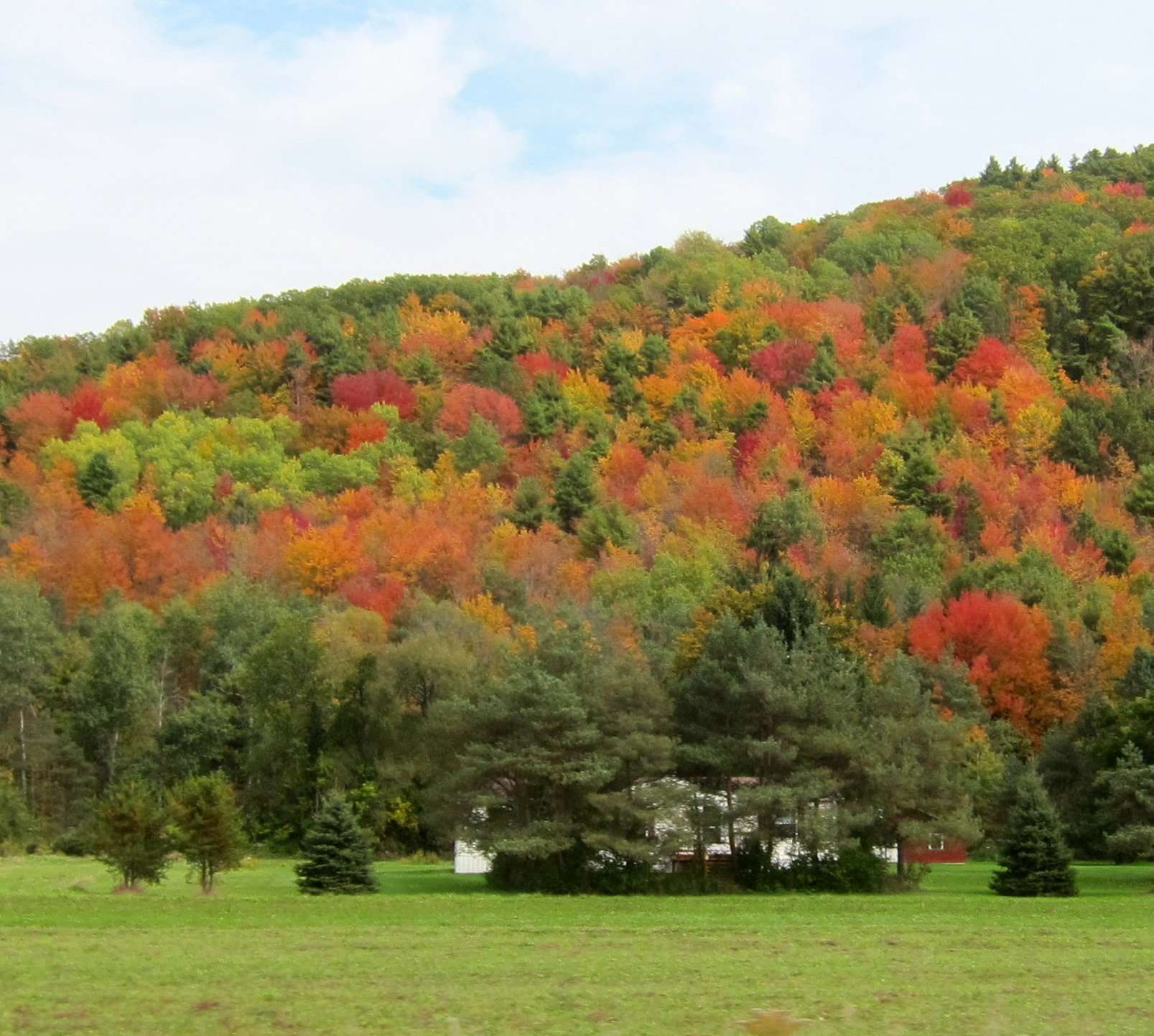 The Walleighs’ 2013 road trip was with good friends with whom they had traveled in New Zealand.  In late September after traversing Quebec Province (go to Quebec or Montreal, etc.  for details on the Canada portion of this trip), they crossed the border into New York state and zig-zagged across. Go to Western NY for details of Corning and the Finger Lakes and visits to wineries, cideries, breweries, cheese-eries (mmmm).

From NY’s western border across the state through the Catskill Mountains and down the Hudson Valley, the Walleighs were awed by the foliage colors, flaming in golds, reds and oranges. This was the best leaf-peeping they had ever experienced (even with growing up in the northeast) despite many overcast days!  Though the focus of the trip was supposed to be stops like Cooperstown, their strongest memories were of the glowing yellow, gold, orange and red trees…Eventually they wended their way down to Manhattan in time to attend friends’ daughter’s wedding in mid-October.  Join them as they ate, drank and oohhed and aahhed their way during the 2+ weeks on the road.

Fascinating (yes, really) Farmers’ Museum. After driving through the New-England-like town of Cazenovia toward Cooperstown and the National Baseball Hall of Fame, they stopped at the Farmers’ Museum–recommended by friends as a fun place–built on the site of the former James Fenimore Cooper farm.  This “living museum” is an early 1800s reconstructed small farming village, with “real shops” and buildings, some of which had real hosts.  The General Store “owner” provided a good overview as did the “weaver” in the next shop, who offered insights into early 1800s looms, threads, patterns, and weaving techniques. The blacksmith crew busily fired and hammered pieces of metal as the host talked passionately about what they were doing and how over 4 years, they researched and created all-metal pistols using early 1800s technology, metals, tools and forms. In a working kitchen, one woman spun yarn and another baked an apple cake using only the oven, fire and pans available at that time.  What the Walleighs also learned was that Edward S. Clark had built the Baseball Hall of Fame, the Farmers’ Museum, Otesaga Hotel, and the Fenimore Museum in Cooperstown, creating a 1-man economic development machine for the area. Edward S. Clark’s money must have been at least partly inherited from being 1 of 4 grandsons of Edward Clark, a founder of Singer Sewing Machine Company.

The National Baseball Hall of Fame in Cooperstown—interesting for what it didn’t cover.  Visitors are directed to the 2nd floor first to view exhibits and memorabilia from baseball’s early days.  Apparently, Albert Spalding of sports equipment fame, paid for research on where the game of baseball was invented.  Despite the game probably having started years before, the best story was of a Union officer* post-civil war supposedly inventing the game in his home-town of Cooperstown, so story became legend then fact.  Hence, this location for the Baseball Museum and Hall of Fame, which was started by Edward S. Clark in the mid-1930s, with the 1st inductees inaugurated in 1938.  Unintentionally most impressive was the exhibit on the role and hardships of African-Americans—with no hard assessment of the prejudice behind it.  Also there was no reference, never mind exhibit, on performance-enhancing drugs or any other negative aspects of the game that could stimulate educational discussion among the many families and athletes that visit.

*This Union officer was Abner Doubleday who had fought at the Battle of Gettysburg and was later mistakenly credited for inventing the game of baseball.

Crossing the 300,000 acre Catskill Mountains Preserve. Perhaps the NY highlight for the Walleighs was the drive over twisting, turning roads through the Catskills, past ridge after ridge of trees glowing in flaming colors.  There was a brief break for a half-mile walk to Kaaterskill Falls, a pretty cascade in Rip Van Winkle country, reached by walking carefully along a no-sidewalk edge of highway, thankfully not too busy.  Then it was back to oohhing and aahhing over the ridges of glorious colors, even on the grey day’s drive toward the Hudson Valley.

Two historic art stops, the DIA, and the CIA along the Hudson Valley.  The 1st historic art stop was Cedar Brook, home of Thomas Cole, a founder of the Hudson River School of Art, America’s 1st original art movement which began in early 1800s. This National Historic Site is operated by non-federal-government staff and volunteers, so was unaffected by the government shutdown.  The tour docent in this dark old house clearly was awed by the painter and her responsibility to preserve his preeminent stature, despite few of his original works of art on display.  Apparently most are in museums across the U.S., including in Sacramento.  But there were several paintings by Albert Bierstadt (famous for Yosemite and western art), a Thomas Cole supporter and fellow Hudson River artist 30-years his junior.

The 2nd historic art stop was Olana State Historic Park. This encompassed the whimsical home and grounds of Edward Frederick Church, another early leader of the Hudson River School of Art.  Since the house was closed Mondays, the Walleighs just walked around the large Persian (Moorish)-style brick house and appreciated the views from the hilltop on which the house was situated.  The surrounding countryside’s river, lakes and forests were clearly inspiring to Church and his compatriots.

The 3rd art destination was DIA in Beacon, NY. DIA (word for “through” in Greek, as we learned there) is a vastly different art facility, i.e., a massive warehouse with huge halls of multi-work art exhibits.  Indeed its purpose (initiated by the Schlumberger heiress) is to enable large installation art to have a home.  Though a few were the “white on white” or multiple stripes of paint, there were definitely some clever and creative exhibits:  Andy Warhol’s 70+ painting sequence tightly juxtaposed on 4 long walls;  Sol Dewitt’s line drawing murals of all types; fluorescent light sculptures and  huge metal curved sculptures like hulls of ships.

Another art form: food at the C.I.A. (Culinary Institute of America). A surprisingly large campus, this C.I.A. (there are a few in the U.S.) was preparing a large number of future chefs to populate restaurants and bakeries across the country. Their dinner restaurant was booked but the Walleighs thoroughly enjoyed their student-prepared lunch and desserts at the bakery (and of course, bought some “for the road”).

No Roosevelt Estate sightseeing. Both the FDR and separate Eleanor Roosevelt estates were government-shutdown. But as the Walleighs snuck onto the edge of Eleanor’s home for photos, a groundskeeper told them about a historic Aviation museum: Rhinebeck Aerodrome. Off they went to tour the many old Quonset huts and barns filled with antique planes, interspersed with some old motorcycles. Sadly they missed Saturday flights in old planes since their tour was on a weekday. This nice diversion didn’t offset the disappointment of not visiting FDR library and Hyde Park estate.

Walkway Over the Hudson, West Point, and Union Church near Pocantico Hills—final tourist stops. Opened in 2009, a former railroad bridge was converted to become the Walkway Over the Hudson between Poughkeepsie and Highland, NY. On a lovely fall day, the Walleighs walked the 1.1 miles to enjoy a unique view of the Hudson river and valley.  At their next stop, special permission had apparently just been granted to West Point to re-open despite the shutdown. The Walleighs boarded a bus for a 1-hour tour of the large campus, with the guide pointing out highlights and historic Academy factoids. E.g., one overlook of the Hudson River was considered the perfect spot for wedding photos and “romance”.  Finally, on their way to NYC, the Walleighs stopped at Union Church near Pocantico Hills.  It is famous for 2 reasons: being the “family church” of the Rockefellers due to its proximity to their nearby Kykuit estate AND the many stained glass windows by Chagall and 1 by Matisse to memorialize some family members (but no photos allowed). This was a picturesque way to end the Canada through NY journey because the glorious windows almost captured the wonderful autumn colors the Walleighs had so enjoyed.