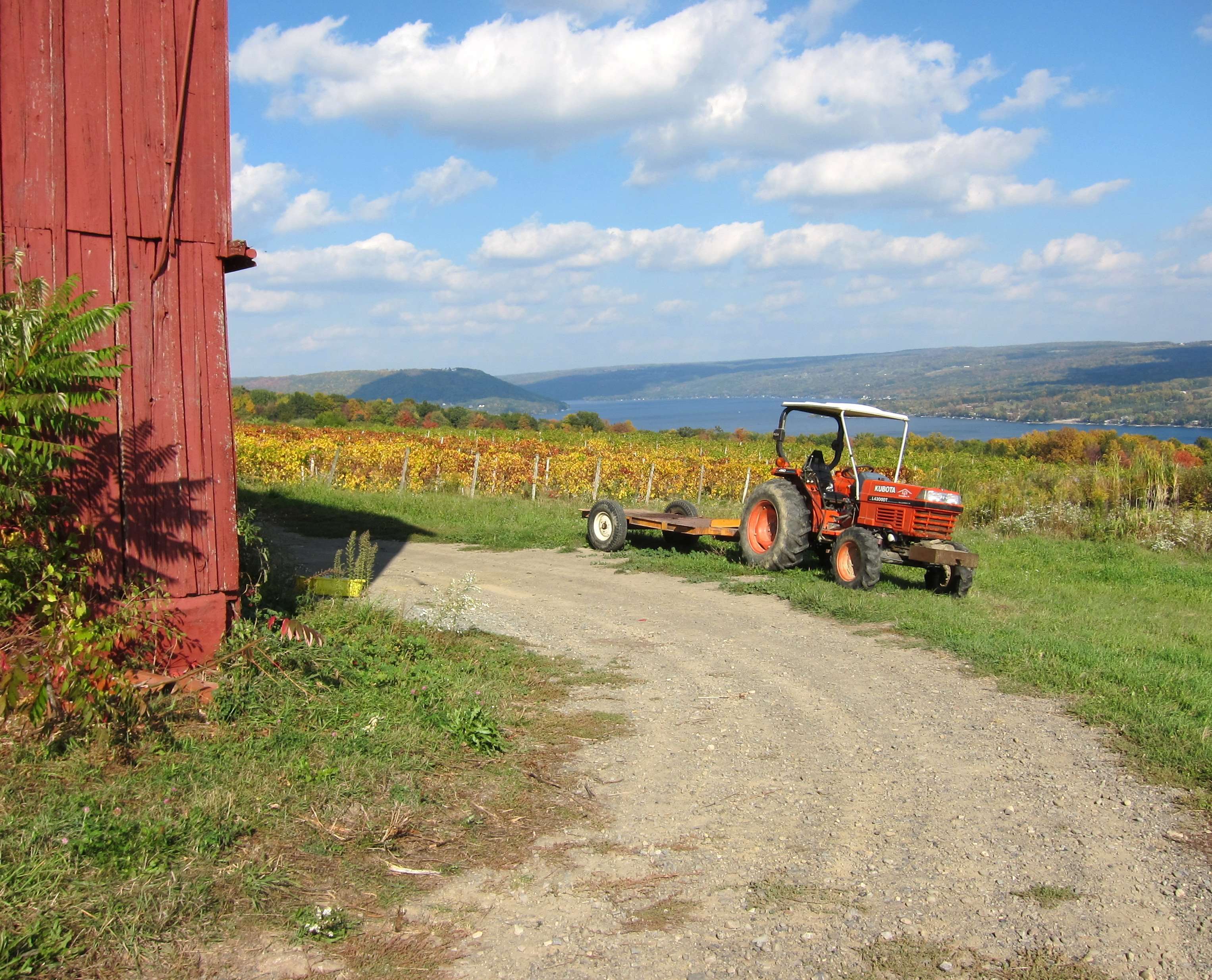 The Walleighs’ 2013 road trip was with good friends with whom they had traveled in New Zealand.  In late September 2013 after traversing Quebec Province (go to Quebec or Montreal, etc.  for details on the Canada portion of this trip), they crossed the border into New York state and zig-zagged across, stopping at Corning, the Finger Lakes and Cooperstown, and the Catskill Mountains (go to Across NY for fall colors, Cooperstown, etc.).  This was the height of “leaf-peeping” season with visits to wineries, cideries, breweries, cheese-eries (mmmm) and great restaurants.  Eventually they wended their way to upper Hudson Valley and down to Manhattan in time to attend friends’ daughter’s wedding in mid-October.  Join them as they ate, drank and oohed and aahhed at the glorious foliage during the 2+ weeks on the road.

NY Wineries not in Napa’s category. Despite the U.S. government shutdown (and a cranky border guard) the Walleighs crossed into New York, heading to Corning via the 1st of the wineries and food-stops along the Finger Lakes. After a delicious lunch at Bully Hill Winery, with a lovely view of Keuka Lake, surrounding farms, vineyards and foliage. the 1st official wine tasting was at Dr. Frank Konstantin’s Vinifera winery. This is 1 of the 2 wineries written up in a NY travel website as well as 1 of the oldest in NY and the most awarded. Though the whites were better than the reds–as advised—the Walleighs were not impressed with the whites either.

Corning Glass Museum–a must-see in western NY–was very different from Wendy’s childhood memories (early-1960s).  Apparently Keuka Lake had flooded the town of Corning in 1972 so the whole site was re-built, with a significant expansion planned again in 2014, even beyond its already larger facility.  3 hours was spent touring most of the impressive exhibits.  Especially fascinating were the extensive collection of glass pieces from almost 5,000 BC to current times as well as the science of glass and its uses in past and current technology.

The Finger Lakes and central NY—farming, cider-ies, distilleries, microbreweries, and cheese-eries.  Along the eastern side of Seneca Lake, the Walleighs visited the Finger Lakes Distillery, opened in 2009, to sample the various whiskeys, vodka, gin, brandies, and liqueurs (3 shots for $3) that were listed on its tasting menu.  Though the raspberry cordial and Maplejack whiskey were OK, none of the 10+ shots tasted were very impressive, so both wineries and young distilleries were then skipped for the remaining trip.

Side trip to Seneca Falls’ National Women’s Hall of Fame.  In 1848 Seneca Falls was the site of the 1st U.S. women’s convention to discuss the many issues facing women at the time, from suffrage, to being husband’s property, to no ownership of property, etc.  The Walleighs were unfamiliar with the impressive document that emerged from that meeting, the Declaration of Sentiments, written mainly by Elizabeth Cady Stanton and Lucretia Mott. Part of the Declaration of Sentiments was in the garden adjacent to the visitors’ center (national, so closed by govt. shutdown), engraved on a wall under cascading water.  It was a very honest, moving statement of the many challenges facing women–some of which still hasn’t changed.  The actual National Women’s Hall of Fame Museum down the street contained in a relatively small space, posters of almost 250 women in science, humanities, government, education and other leadership roles who had been inducted.  Additional women are inducted annually.  All were impressive in their contributions.

Viewing hundreds of corn fields, tens of red barns and white barns, and tasting cider and cheese.  It was astounding how many acres of corn fields there were along western New York roads.  It could have been Iowa!  Also, after a while, it was hard to tell if there were more red barns or white barns, but there were certainly lots of both! One of the many stops along the back roads was a cheese company, owned and operated by a Mennonite family as an extension of their dairy farm, with pleasant but bland jack and cheddar cheeses and cheese curd.  The preferred cheese stop was Murunda Cheese Company whose owner/host not only was very knowledgeable about cheese, but also pleasant, funny and with interesting history of his cheese-making. Apparently, his dairy herd had the highest-producing milk cow in the world a few years ago, so the herd’s bull was in high demand for insemination, providing extra revenue to start the cheese company 6 years prior!  At Bellwether Hard Cidery, a few different types were sampled along with a purchase of Black Magic currant-flavored cider. After meeting 1 of the owners of the Beak & Skiff Apple Orchards who was promoting his apple products (including Muddy Cider, made from vodka and cider) at the Sherwood Inn lobby in Skaneateles, NY, the Walleighs took a fun detour to his Apple Farm where they tasted more ciders and an amazing variety of apples as well as took a tractor-driven ride in some orchards.

At least 40 microbreweries in NY state. It would have been impossible to travel to all 40+ microbreweries, Wendy decided that she should at least aim for several. At Wagner’s Winery and Brewery Wendy liked the Doppelboch best of the several different beers tasted. At Rooster Fish brewery in Watkins Glen, NY, Wendy favored the Monk’s Hood Belgian Style Pale Ale and Pumpkinweizen.  The Ommegang Brewery is famous among U.S. micro-breweries for its quality and early leadership.  It was started in 1997 with partial investment by a Belgian brewery that had been founded in 1549, and which apparently became full, but hands-off owners of this large, successful operation in 2003.  Due to huge crowds, the Walleighs only experienced an informal tasting over lunch with guidance and explanations from their waitress as they shared tasting 6 available, quite tasty beers to accompany a delicious cheese fondue.