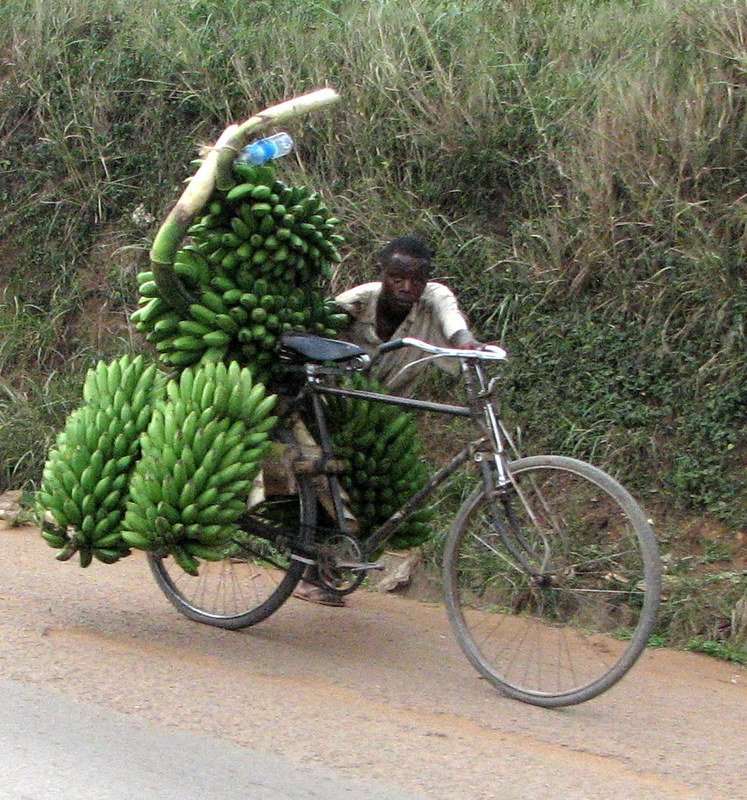 In August, 2007, Rick and Wendy learned about the then-main TechnoServe Uganda project underway: organizing farmers of Matooke (ma-TOH-kay) bananas, the country’s main staple.  These are starch banana which when removed from the still-green skins are cooked, crushed, and served like mashed white potatoes. Ntungu West was the first of three villages we visited near Mbarara in western Uganda to understand from the small Matooke farmers about the impact TechnoServe had on their lives.  Better schools and healthcare had already greatly benefited the villages’ children due to TechnoServe’s organizing the farmers into effective cooperatives.  The groups were trained on improved growing techniques; utilizing irrigation and fertilization; negotiating higher pricing with traders; preparing fewer but larger deliveries on time; and providing consistently high quality products to market.  In addition to increased Matooke production, better pricing enabled farmers to diversify their crops and add livestock to significantly raise family incomes.

Also we met with the District Supervisor of Mbarara Agri-Products, a partner of TechnoServe Uganda.  After learning about

the history and current status of the Matooke bananas, milk and other products in her region, we discussed possible ways to build demand for the use of milk, e.g.: pilot free milk in schools, create combined processed products like banana milk shakes, and since Mbarara was the leading Matooke district in Uganda, maybe even branding the bananas like the famous Chiquita.

In summary, the benefits to the TechnoServe-organized farmers were healthier, better educated families with diverse incomes who work together with neighbors to negotiate their future in a united front.  At Rwombabana the last village we visited, we were hosted by a widow who had started with almost nothing then planted/expanded matooke and added cows and goats.  She proved that there are entrepreneurial farmers!  And meanwhile, Rick and Wendy learned a lifetime’s worth of knowledge about Matooke bananas!

The Ntungu West Group in Ntungu Parish, Nyakitunda Sub-County was challenged—probably most years in farming—by price and weather fluctuations e.g., wind  and hailstorms, which negatively impacted their matooke pricing.  Thus they had a hard time paying school fees and bank loans due to the low harvest.  They were pleased to be in the cooperative organization because though everyone suffers, they also benefit from maintaining group businesses. Prior to TechnoServe, it was hard to get funding, but now they had received and serviced loans, gotten better prices, and diversified as a group.  The smallest farmers particularly benefited because they received the same prices for their produce as larger volume farmers.  In fact, despite low prices due to more availability from having to cut down many wind-damaged Matooke bunches, the group achieved much better pricing than non-members and had even started their own savings and loan program to help the village buy manure, add land and buy dairy cows.  All of the group members confirmed that they were now able to afford school fees for their children or even send them to better institutions.

There were many interesting individual stories.  Ntungu’s Chairman added a few dairy cattle. The village purchased beans to store then sell at future, higher prices. Goats were bought to sell as meat.  One farmer who was also the local Matooke trader, bought goats to keep along with a new dairy cow and some chickens; rented a truck to make 4 trips per week to market; and planned to buy his own truck once he proved his “loan-worthiness” by keeping records of his crops and other income sources.  In a different story, one woman member had bought a cow which died a few months later but because she had earned enough from milk and had harvested some manure, she had successfully planted a good crop of Irish Potatoes.  She then partnered with two other women using the TechnoServe matooke business model to grow and sell potatoes at a good profit.

Previous to TechnoServe, the Kibaya group in Bugashe Parish had been organized by various government agencies but with only some success.  As with Ntungu, we heard similar, positive impacts of becoming TechnoServe marketing groups,including better pricing.  One of a few unique stories was that one member with large plot but poor house, had been selling a few bunches here and there. But he stopped selling bunches after actively joining the group, which had already loaned him money to improve his house with sheet metal delivered from Kampala by a truck used by the group.  Besides home improvements, bicycle purchases, and school fee payments, the group’s savings had already provided loans to expand some farms into other cash crops, e.g., coffee which sold at a profit; beans which they stored to be sold later at a higher price; and additional cows and goats.  Also because of the group’s positive reputation, other nonprofits approached them with new opportunities and benefits. Additionally, because they were well-respected by local government, they received highly subsidized loans for crop improvement.

The final visit was to Rwombabana group in Kamushoko Parish. Started by TNS February 2007, this group of 44 active members had already produced 17,283 bunches in only 7 months.  A Ugandan government agency had also donated to about 60 goats plus ten beehives to farm group members.  Since being organized by TechnoServe, they had doubled their previous pricing up to 2,000 Ugandan shilling per bunch!