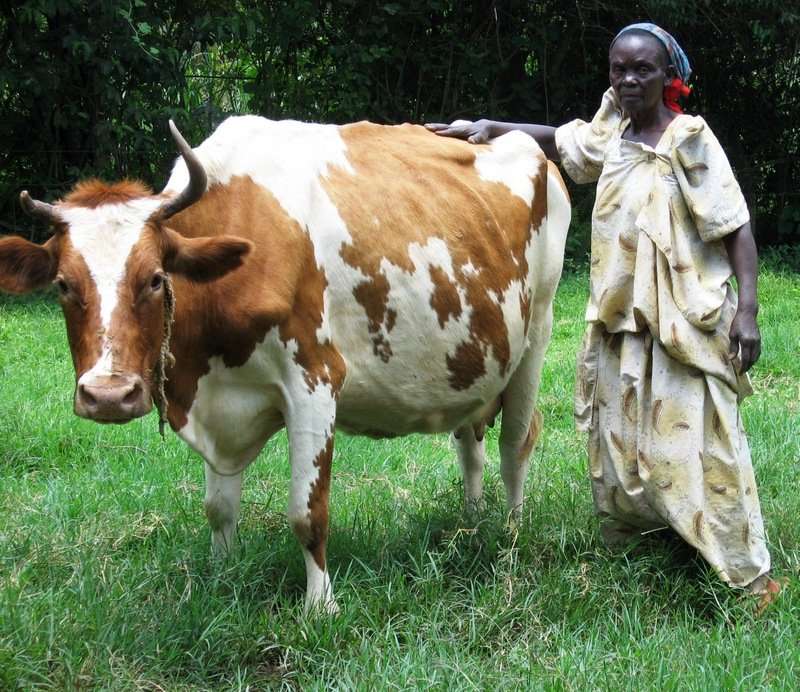 Starting late 2007, TechnoServe Uganda significantly expanded its country projects to include dairy, horticulture, cotton, and women entrepreneurs. In the fall of 2008 Wendy and a couple of TechnoServe business advisors drove 50 kilometers for 1.5 hours over battered pavement then bumpy dirt roads to the town of Lugazi in the Mukono District east of Kampala.  She met members of a newly-formed dairy co-operative as well as visited three individual dairy farms.  Though about 70 farms had started to organize in April 2008, TechnoServe and its dairy development partners really established the Buikwe Dairy Cooperative in June 2008. Formal training, the co-op structure and regular meetings began in July 2008.

The first farm had about five second-generation hybrid cows that were out in their pasture during the days.  As is typical, cows are milked in a pen in the morning and night.  But theirs produced less in the evening because of poor feeding for a

total of less than 8 liters per cow per day–vs. U.S. prime cows which can produce up to 30 liters per day.  Just a couple of examples of this first farm’s inefficient operations were that they do not utilize any of the manure on their crops nor prevented any rain runoff from eroding their land.

The second farm had one very good milk cow among five total, which produced 10L milk in the morning and 8L at night and so far had birthed seven calves. The widow-owner knew that this cow had reached the maximum breeding recommended for reproductive health but needed to be bred again because her offspring as well as other cows had started producing much less milk.  Her small herd’s grass-grazing was supplemented by fodder consisting of chopped banana plants culled after harvesting bunches, which provided some minimally additional fiber and water.  This widow also kept a few chickens for eggs and meat and a couple of goats for meat.  She seemed eager to do well and already managed to successfully put her eight children through school. Hopefully once she joined the co-op, she received training, credit to buy animal services, and new ideas for feeding her cows including vitamins, minerals and other healthcare to improve milk production.

The final farm visited was definitely the most impressive with 12 cows in the pasture and newborn calves inside a barn with 3 puppies to keep them company.  The wife operated a chicken coop with more than 20 chickens producing eggs and meat; a piggery barn; and an efficient goat herd.  She also grew a wide variety of produce for sale: Robusta coffee (drying in yard), matooke bananas, passion fruit, avocados, hot peppers and vanilla.  Her farm also had a hand-dug 120-feet well which not only allowed a steady water supply for her household and livestock, but also for her side-business.  She began in 2007 to cook and package yogurt in small quantities.  At the time of this visit, because of her other responsibilities, she was  only able to devote two days a week to the yogurt business.  Using just a four-gallon pot over a wood-burning stove, she was able to process milk into about 30 to 50 liters of yogurt per week in 250ml and 500 ml. sealed polyethylene packets. The wife easily sold this yogurt to local schools, hospitals and some kiosks, with demand continually exceeding capacity.  This farm could be a model to the other co-op members because they had already managed to buy a truck, buy supplements for livestock and crops, and send their six children to school.  In fact one child recently left to study abroad at university.