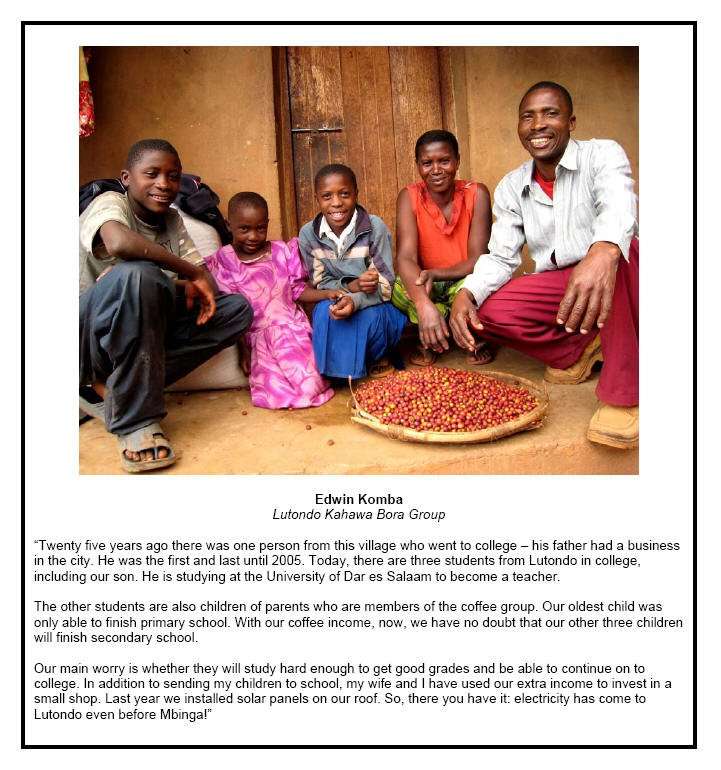 Rick and Wendy had traveled to Tanzania in 1997 on their first African safari.  Despite TechnoServe having a major coffee program producing Kilicafe coffee sold to Peet’s and Starbucks, they did not travel there on TechnoServe business or pleasure after 1997.  However, in 2007 while they were living in Nairobi, the then-leader of the coffee team in Kenya and Tanzania asked his staff to give him some stories of the impact from TechnoServe’s Kilicafe project on real people, beyond just great statistics.  One team member reported that before TechnoServe there was one secondary school in the region, built by a foreign NGO which was in disrepair.  Since TechnoServe’s arrival in 2003 (through 2007), twelve secondary schools were communally paid, built and maintained.  Here are stories of a few small coffee farmers in Tanzania who are part of TechnoServe’s Kilicafe coffee project there.

“I am a married woman and a mother of six children.  Most of our income comes from coffee. Before joining Lilwambo Kahawa Bora, my husband was a member of the local cooperative.  The cooperative was very weak.  They didn’t provide us with any farm inputs and there is nowhere to buy them in the villages.  They would give us a small advance payment and then promised a second payment which rarely came.

Lilwambo was formed in 2004 and my husband and I became members.  The first benefit of the group was a much higher price.  Last year, 18 members including me contributed $80 to build a well and also pipes and cement to link our houses to the new water source.  Now we have clean water inside our compound every day of the year.  Before, we would have to spend more than three hours a day walking to and from the river for water.

I also purchased a maize huller and 1.5 acres. Of coffee with the extra money I earned last year.  When the advances come this season, I want to build a house for the maize huller.  I plan to save most of the remaining money for my two children who are nearing secondary school age.

I have a lot more free time now, which has allowed me to establish a small fishery.  It will also enable me to run the maize hulling business. The biggest problem I anticipate is that there is no diesel available in the village so I will have to go to Mbinga town to buy fuel to power the huller.  But it is good to have this kind of problem rather than those we faced only several years ago.” “Twenty five years ago there was one person from this village who went to college. His father had a business in the city.  He was the first and last until 2005.  Today there are three students from Lutondo in college, including our son.  He is studying at the University of Dar es Salaam to become a teacher.

The other students are also children of parents who are members of the coffee group.  Our oldest child was only able to finish primary school.  With our coffee income now, we have no doubt that our other three children will finish secondary school.

Our main worry is whether they will study hard enough to get good grades and be able to continue on to college.  In addition to sending my children to school, my wife and I have used our extra income to invest in a small shop.  Last year we installed solar panels on our roof.  So, there you have it: electricity has come to Lutondo even before Mbinga!”

“This [secondary] school was built by us,” says Borgias Nchimbi, Chairman of the Kipololo Secondary School Board. “In 1995, we sold an old Isuzu pickup and used the money to build a school. Because everyone in Kipololo is a coffee farmer, we also contributed four cents for each kilo of coffee we sold through the local cooperative to assist the project.  Everyone also brought bricks and provided labor for construction.  By 1997, we had built four classrooms and the headmaster’s office. But before the school could be opened, the cooperative died. Every farmer was still expected to contribute money for the school.  However, coffee prices were very low. It was very difficult to collect the money and we couldn’t let people give up food for the sake of the school.

This was a very difficult time.  You see, when there is no money, there is no development—people don’t think about the future.  They try to forget the current situation by turning to alcohol.

In 2003, we bought a [coffee processing] wet mill after learning about the benefits of producing quality coffee from TechnoServe.  Things got better.  The price we received for our coffee went up and we used the money to repair the school after years of neglect.

In Kipololo the people were pushing forward.  The news reached the Ministry of Education and they came all the way to Mbinga to register the school officially.  And the school doors opened.

Since then we build five more classrooms and two teachers’ houses.  Now, every year, each family contributes $2 and 500 bricks to the school.  Some contribute more.  It truly is a modern school—we have science laboratories, a generator for electricity, a satellite dish, and other things not found in many secondary schools. TechnoServe came to the village of Matekela in 2003 to support local coffee farmers.  Since that time, the price farmers have received for their coffee has tripled.  With this new prosperity the people of Matekela were finally able to complete a health clinic which had commenced construction in 1997.

“Our health clinic has undergone improvements each year since it opened.  Before the nearest hospital was ten miles away, a long way to walk for a woman giving birth.  Now we treat about 3,000 patients a year from Matekela and Malindindo villages.

We still have challenges, though.  The government provides the medicines, but everything else must come from the villagers.  This year, when the first coffee payments come, everyone will contribute to purchase HIV testing equipment.”

One of the patients to visit the Matekela health clinic in 2006 was Mtonda Msuha.  He was diagnosed with tuberculosis. Mtonda had not received an education but had always put education for his children before anything else.  His son Alexander had recently begun his first year of university.  Having to choose between being treated for tuberculosis and asking his son to leave university, Mtonda chose not to be treated.  His younger son Aden had been planning to attend university but decided to stay home to support his father and mother on the farm.

The coffee cooperative heard of Mtonda’s situation.  With the higher prices they had been receiving for quality coffee, the cooperative had sufficient funds to provide a loan to Mtonda.  His son remained in university and Mtonda was able to receive the treatment he needed.

Aden explains, “Now he is on good health and I plan to enter college next year.  The experience of caring for my father has made me want to be a doctor.  I have eight brothers and sisters still at school.  I am confident that next year we will have money to pay for my college tuition and that my brothers and sisters will have the same opportunity for a college education as me.”