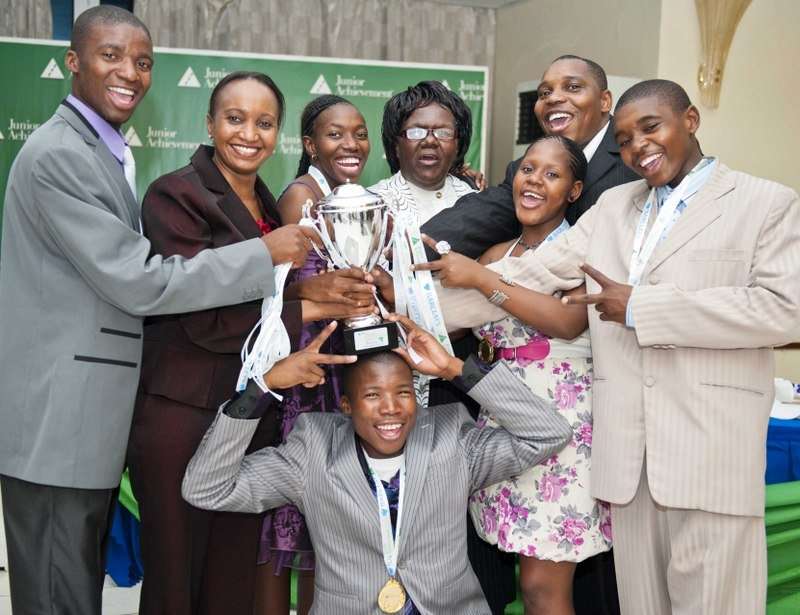 In 2006 while living in Swaziland, Wendy and a TechnoServe colleague established a School Age Youth Entrepreneuship (SAYE) Program that was to encourage Swazi young people to become entrepreneurs rather than depend on government or large companies for employment.  Incorpoating Junior Achievement’s (JA) internationally-proven high school curricula, TechnoServe partnered with a Swazi youth development agency, LULOTE, to recruit youth into the program.  Before departing from Swaziland at the end of 2006, the Wendy and her colleagues launched the pilot program, teaching about 50 young people in the Manzini area one of the JA classes which had been modified for the Swazi culture.

Over the next two years, the TechnoServe’s SAYE project / LULOTE organization transitioned to officially become fully independent as the JA Swaziland program.  As of late 2012, it had already educated almost 20,000 young Swazis–and over 4,500 just in 2012–to consider creating their own small businesses and indeed inspired the establishment of several ongoing enterprises.

During October 2011, teen entrepreneurs in “Eco Eagles” from Swaziland’s Lusoti High School won both the Swaziland national competition and the prestigious JA Africa Regional Competition.  Then again in 2012, for the 2nd year in a row, Lusoti High School ‘s JA Company won both the JA Swaziland and  JA Africa Regional JA Company of the Year!  Held in 2012 in Accra, Ghana, this competition showcased business skills, ingenuity, innovation, and accomplishments of all the youth who participated in the JA Company Program®.  During three days of competition, 22 student companies from 15 sub-Saharan countries participated in a trade fair and pitched their companies to a judging panel comprised of business leaders. Located in Mazini, Swaziland’s second largest city, Hillside High School’s JA Company produced and sold small table lamps as well as refurbished desks. The company leveraged the increasing popularity of these “side” table lamps (vs. overhead lighting) to penetrate the local market, achieving the highest sales and profits among all of the JA Company programs in Swaziland.

JA reached out to disabled youth by having the country’s high school for the deaf participate in the 2011 JA Company Programs.  Their successful business produced and sold broiler chickens to their community.  Not only did they reach the top 10 in sales for JA Companies in 2011, that student team was also in the top 3 in the annual JA Swaziland JA Company Competition.  Even more impressive, their corporate social investment was supporting an old and vulnerable family within their community.

Lusoti Investors Investment (PTY) LTD, was founded at Lusoti High School in February 2010 as a JA Company program then registered in March 2011 as an official enterprise in the Kingdom of Swaziland. Lusoti Investors Investment (PTY) LTD manufactured, packaged, and distributed high-quality black board chalk to some Swaziland schools. This company employed two production assistants and one part time sales representative; was overseen by 13 board members, all of whom were 2010 JA Company participants; and benefitted from 26 shareholders.  As of early 2012, Lusoti Investors Investment LTD had produced then sold over 10,000 chalk cartons, each with 100-piece sticks.  The company was seeking to access more funding in order to purchase a semi-automatic chalk production machine, more stock, and possibly export to other South African Development Corp. (SADC) countries.