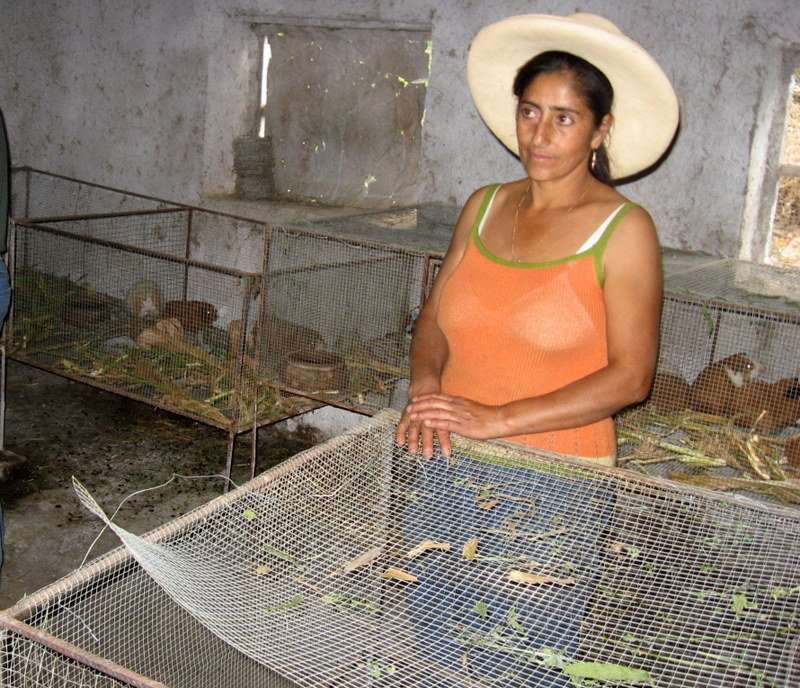 Most special Peruvian feasts include dishes made with guinea pig, or Cuy. This is traditional not only in Peru but among émigrés in the U.S.  Previous to TechnoServe’s support, eleven families in El Huayo (over 1 hour from Cajamarca) had been breeding Cuy for local and regional consumption.  They sold the animals to processors for slaughter and packaging who then sold to retailers. Since TechnoServe Peru began assisting the El Huayo families, this “guinea pig network” began to raise, slaughter, and package the Cuy then sold their products both locally and to the U.S.  About 300 to 500 animals were bred in cages at any given time, until they were market-ready after about three months.  Also as of mid-2008, nine of the eleven families’

representatives were women, including Marilu, Chief of Breeding, and Maura, Chief of the Processing Plant.  The El Huayo network then supplied wholesalers at 16 to 17 Soles per processed animal (up from 3 Soles per live animal) according to young Vicente, Commercial Chief. The increased profits enabled the network to build its own abattoir (slaughterhouse) instead of renting facilities from another local food processor. The network was also able to develop a more efficient AND sanitary process, which should further grow profits as well as meet U.S. market requirements. Construction started in March and completed mid-June 2008, when the plant opened with a community-wide grand fiesta.