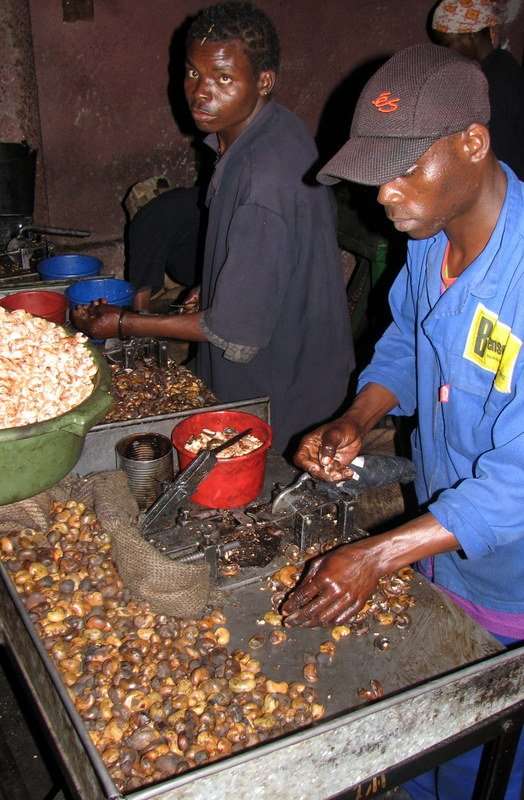 Mozambique’s once-thriving cashew industry had tanked due to political and natural disasters.*  The cashew industry is now thriving.  The small village of Namige, Mozambique demonstrates how identifying high-potential entrepreneurs and giving them the tools to achieve success is a way to locally solve global issues.

The cumulative impact of decolonization, civil war, misguided policies and natural disasters brought cashew production to a virtual standstill in Mozambique and contributed to the nation’s struggle with poverty. In 2001 in Namige, TechnoServe linked entrepreneur Antonio Miranda with Shakti Pal, a technical expert in the industry. Pal recalls that Miranda had “no real money, but

an idea,” and each man was immediately impressed with the other. In a unified effort to reinvent the local cashew industry, TechnoServe hired Pal to train Miranda in how to set up and run a cashew processing business.  A do-it-yourself ethic prevailed as Miranda welded, Pal designed, and the factory was built entirely by local workers using local materials. TechnoServe introduced a job-generating processing model that ensured minimum wage salary, health insurance and child care for all employees –and contributed to economic regeneration.

In 2002, on the opening day of business, more than 1,000 people showed up for 64 jobs at the first factory. Two years later Miranda Caju was operating at a capacity of 1,500 tons and employed more than 400 workers. Miranda’s success proved to be an effective blueprint and within six years of the Namige opening, 24 “new model” factories were in operation throughout Mozambique. TechnoServe also helped several factory owners to form Agribusiness Industries Association (AIA), a private services company that launched the Zambique brand – a quality mark – and managed the export supply chain.

In 2008, Mozambique’s factories combined to process over 23,700 tons of cashews – and TechnoServe ceased direct support. TechnoServe’s 16 client cashew processing plants bought nuts from over one hundred thousand small-scale producers and had total sales revenues of $12 million, employing more than 4,700 employees and paying $1.6 million in wages.  In a sign of modernity and growth, Namige is becoming a market town. Since 2002, the number of vendors in the central market has more than tripled. Approximately 30 operators now conduct business there. The town’s growth has sparked new-found interest among teachers, nurses, government workers and entrepreneurs.

The benefits go beyond workers’ financial gains. Community members almost universally note that life is better since the arrival of the cashew industry. Parents now have money to buy school clothes, supplies and books for their children, materials to build or improve their homes, and an occasional luxury item like a radio.   Moreover, communities are safer – children are now seen outside of their homes in the early evening (before, there streets were nearly deserted by 4 p.m.).  As a result of investing in one entrepreneur’s vision, families in and around Namige have spurred a domino effect of positive economic and social developments.