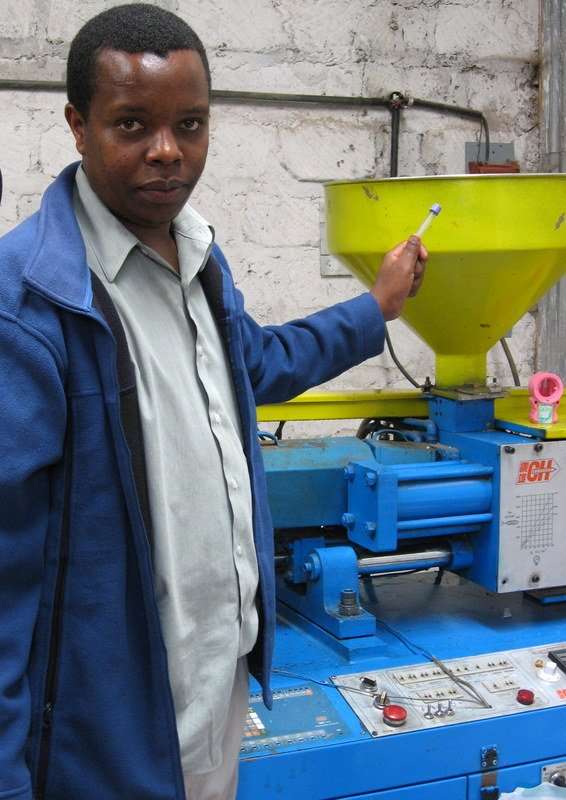 Each of top 20 Believe Begin Become Business Plan Competition finalists from 2007 received “after-care” in the form of business consulting by TechnoServe staff.  Wendy was able to visit Bioplast Industries one year after the competition.  Paul Ngugi Homba received his laboratory technician certification in 2000 then worked in a medical laboratory for several years. While gaining hands-on experience, he noticed that many testing containers used by doctors were inefficient because they were poorly designed.  From that insight he began considering creating his own medical packaging business.

Paul launched Bioplast Industries first with a consumer product to gain manufacturing, retailing, and production knowledge.  In early 2007, he developed an air freshener comprised of a plastic molded device into which a tube of scented oil can be inserted

then pressured to spray slowly into a vehicle.  Paul hired many young women to hawk the devices on the streets of Nairobi.  After building some experience with a plastic molding machine, he switched his products back to his medical knowledge base.  He computer-designed a special capped tube with a spoon-like device inside for use as a patient-friendly, sanitary stool collection container, which he calls “Easypot”.  He managed to purchase a used plastic-injection-molding machine then he connected online with a Hong Kong company which manufactured the mold to his specifications. Meanwhile, he consumer-tested the device to ensure it would meet patient and doctor needs, made improvements, and finalized the mold’s production in Honk Kong.

In parallel, he also began selling the Easypots to his network of doctors and laboratories initially through medical device distributors and his own efforts.  However he felt he would have better customer relationships and control of his revenues through direct sales of Easypots.  He now has several sales people who call upon local doctors, labs, hospitals, etc. building a small but stable revenue base.  To uncover larger opportunities, he advertises his website on eBay and through Alibaba, an internet medical supply portal, as well as pays for an advantageous listing during a customer search for this type of device.

In 2007 with two other employees, Paul designed, manufactured, and began selling his 2nd product. Specicari is a capped cup for sputum and urine specimens, which he can sell into his same customer base.  By late 2006, he had expanded his product sales internationally via his internet activities, qualifying for major projects in Uganda and Nigeria.  In 2007, Paul was stretching his production capacity.  When he learned about Believe Begin Become (BBB) TechnoServe Kenya’s national business plan competition, Paul applied from Nairobi District, the most competitive pool of businesses among the nearly 6,000 submissions. Paul qualified as one of the 300 semi-finalists to receive vigorous, in-depth business training.  His strategy within his business plan was to add manufacturing capacity, invest in a 3rd product development, and expand his markets.  With his new business skills, he was able to participate among the final 100 BBB competitors. In November 2007, Bioplast Industries was recognized as a high potential enterprise so Paul was awarded a Believe Begin Become prize of Ksh. 500,000 (US$5,800).

Despite Kenya’s political turmoil from January to March 2008, Bioplast Industries maintained its successful growth trajectory.  His BBB award enabled Paul to purchase a new mold for his 3rd product on his higher volume machine.  With additional TechnoServe support he:

–        Received a loan from both MyC4 (a Small to Medium Enterprise investor) and GrowthAfrica Consulting;

–        Is now able to export millions of his products to Uganda, Nigeria, Mozambique, Malawi and Tanzania.

By the end of 2008, Paul targeted to have shipped about 1.5 million containers, projecting 3 million by the end of 2009.  And that’s just the first phase of his 5-year vision. To keep current with medical trends, he continues to run his own small laboratory. Paul believes Bioplast Industries has a bright future, “I started from scratch and now I’m growing profits, products and monies.  It’s a beautiful thing!”