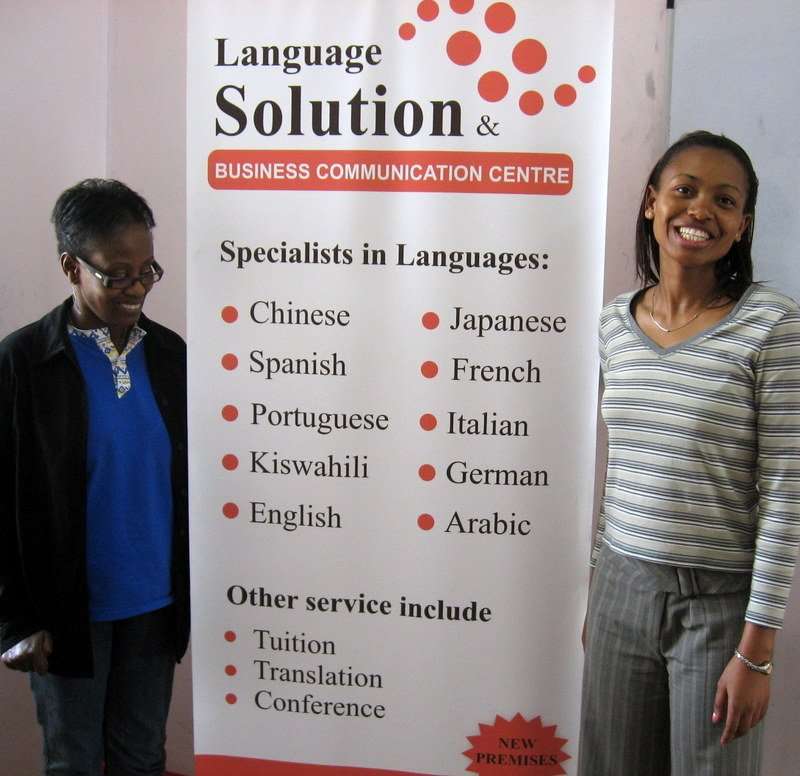 Each of top 20 BBB finalists from 2007 received “after-care” in the form of business consulting by TechnoServe staff.  Wendy visited Language Solutions one year after the Business Plan Competition.

“I have no choice!  I make it or I make it!” declared the very determined Kenyan business woman, Jacqueline Machaka, Managing Director and Owner of Language Solutions in Nairobi.  With her drive, savvy and persistence, as of fall 2008 Jacqui was well on her way to making great impact on Kenya’s economy.

In July 2004, she founded Language Solutions with one language teacher in the upscale Hurlingham section of Nairobi, Kenya.  Initially she sought clients who wanted to learn Mandarin Chinese, then expanded to other language classes.  By 2005, Jacqui and a staff of two moved to a bigger nearby facility to enable more training classes, offices for translating multiple languages, and equipment and preparation space for her interpreters.  By early 2007, Language Solutions realized they could achieve more impact—particularly meeting their alumni’s needs for improved financial skills in their lives and at work—by opening a second facility. When Believe Begin Become (BBB) national business plan competition was announced in March 2007, Jacqui recognized an opportunity to improve her business in multiple ways.

Jacqui’s business expansion plan not only qualified for the top 300 semi-finalists among nearly 6,000 Believe Begin B

ecome applications but did so among many very talented Nairobi entrepreneurs. With her recognizable drive, she joined the top 100 semi-finalists in the business plan competition.  Her grit and determination are best demonstrated by her preparation for the final judging.  Her 99 other colleagues and she arrived at a conference site on the outskirts of Nairobi on a Sunday evening.  By Monday evening, Jacqui was in a great deal of stomach pain so went to a Nairobi emergency room on Tuesday morning to find that she needed an appendectomy.  She returned to the BBB conference site on Wednesday night, against doctors’ orders, finalized her preparation for judging on Friday, and was awarded the competition’s Grand Prize of Ksh. 1 million on Saturday 17th November 2007. network, they are gaining opportunities to meet African and global companies’ language translation and training needs.  Language Solution Alumni and other clients now also can take financial training classes to improve their own careers as well as their employers’ companies. Finally, by seeking activities outside of Kenya, Jacqui can better sustain Language Solutions through high and low “economic seasons” around Nairobi as well as continue to expand into related businesses.

Mid-2008, Jacqui partnered with another Kenyan business-woman, Jane Katuga, to enhance Language Solutions’ creative, market-based approach to maintaining her two sites, finding new clients, and establishing new opportunities. The team researched how other developing countries and/or institutions successfully implement similar, potential business ventures.  As important to understanding market demands, students must explain why they want to learn a new language. Jacqui’s team generally finds that changing students’ “language attitude” will enable better relationships, understand other cultures, and expand business or personal horizons.  Language Solutions incorporates these elements so that proficiency in a new language can then open doors to new opportunities in many ways—for the company and their clients. For example, a Kenyan doctor was taught Spanish at Language Solutions, resulting in his significantly expanding patients among what had been an under-served local Hispanic community.  Alternately, by learning new languages and cultures, service organizations such as banking and hospitals not only better serve their current customers but are able to have a competitive advantage in expanding to new customers, industries, and countries.

Over the years, Jacqui developed a “think tank” approach among her employees, who can propose new business ideas to a committee for evaluation.  Since winning her Believe Begin Become award, she instituted new ways to better promote Language Solutions as well as new opportunities for her company.  For instance, Jacqui’s team hosted a Spanish Month and Arab Month with themed neighborhood classes, food, and entertainment.  Other potential business areas included services in tribal languages, franchising their methodology into other parts of Africa, and teaching practical business skills at universities to enable students to apply the theories to real world cases.  She built a Board of Directors as well as an Advisory Committee for Language Solutions to ensure that she continues to both stay ahead of the trends yet remain on a profitable track.

During the year subsequent to her participation in Believe Begin Become, Jacqui appeared almost weekly in Kenyan media.  She has also been featured in Lenovo laptops’ internationally published advertisement and documentary.  She capitalized on this promotion, her website, and her Think Tank to achieve Ksh. 6 million annual turnover and 19 employees in 2008.  She “walks the talk” of her philosophy and enterprise. “Language is the dress of our thoughts. Like having a light in the night so you won’t stumble on a thorn in the road, people can progress toward success by using language to re-set their ideas and attitudes. And of course, people know when you speak their language that you care about them.  Language Solutions is destined to make a difference in our business, improve our students’ capacities and attitudes, develop our staff, and thus contribute to the economic growth in Kenya.”  Now isn’t that an entrepreneur worth investing in?