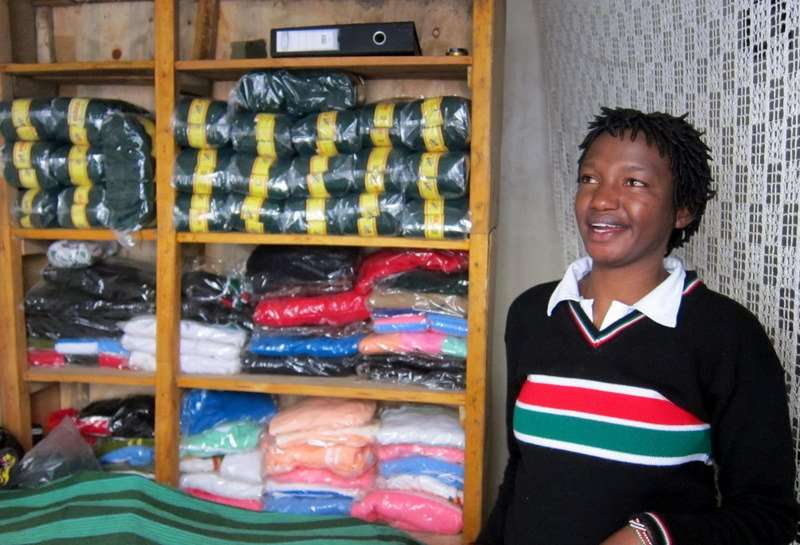 Wendy first met Cecilia Katungwa in March 2007 at the inter-club Young Women in Enterprise business plan competition.  Wendy was so impressed with Cecilia’s entrepreneurship, that she ordered 30 knitted scarves from Cecilia to be delivered in three weeks.  When Cecilia called to set a date for on-time delivery of Wendy’s scarves,  that began a friendship that continues today through email and Facebook.  Here is her amazing story from 2007 to 2012.

Cecilia Katungwa had to overcome many difficulties in her young life. She and her five siblings were orphaned as children by the death of both parents, which forced four of them into an orphanage. Then Cecilia became responsible for her two younger

siblings.  To support them she had to walk five kilometers each way to reach her job as a poorly-paid seamstress apprentice. But her indefatigable determination combined with skills she learned at TechnoServe’s Young Women in Enterprise (YWE) program at the Fuata Nyanyo Club, led Cecilia to take the big risk which all successful entrepreneurs do: starting her own small enterprise. Her Kacece Creations, a successful knitted products business, initially used an old machine donated by Catholic nuns who had helped her after her parents’ death.  This enabled Cecilia to begin knitting and selling a small range of adult and baby clothing from her house located in Nairobi’s Mukuru informal settlement/slum (over 100,000 population).

With her gain in self-confidence, her continued her solid record keeping, and new marketing skills from her YWE participation, Cecelia promoted her Kacece Creations products to customers and shops near her Mukuru homestead. By the end of 2007, Cecilia had acquired a second, new knitting machine with a donation from a well-wisher and also hired a couple of part-time employees to help sew the knitted sections into garments.  This enabled her to sell to a few retail stores and school-based clients for whom she created sweaters for the students’ winter uniforms. She started to receive orders to make a wider range of clothing which led to an increase in her sales and production volumes as well as her profit margins.  But she was soon working 15 to 17 hours a day in difficult conditions to meet her growing demand.  Cecelia’s numerous challenges included insufficient lighting, lack of home security, and customers’ poor accessibility to her house to request and pick up her products.

In coordination with the Young Women in Enterprise team, she formally registered her business and sought more customer-accessible premises to safely produce and distribute her knitted clothing.  Finally Kacece Creations relocated to Kenyatta Market utilizing the prize money for Cecilia’s winning the YWE enterprise club competitions.  The new location boosted her business, enabling her to sell her products to nearby schools, shops and supermarkets.  So she employed one young woman from her YWE enterprise club in Mukuru and on a commission-basis, other girls to also help in finishing and marketing her knitted products.

Cecelia was very grateful for the support and many trainings she received from TechnoServe, International Labour Organization, and “the Girl Effect among others.  To top it all, she was mentored by Eva Muraya, an outstanding Kenyan business leader.  Cecilia has been an inspiration to her club and all Young Women in Enterprise members, to whom she has given motivational talks during team events and leadership meetings. Cecilia not only symbolizes the success of the YWE program, but is also an incredible role model and mentor for her siblings, YWE alumnae, and young women throughout Kenya.

Cecilia Katungwa is more than a survivor.  This young Kenyan woman aged 27 as of 2012 has overcome multiple adversities in both her personal and work life that would overwhelm any normal person.  And yet she triumphs as an entrepreneur, family supporter, and human being.

During 2008, the international nonprofit organization Vital Voices invited her to attend training which further cemented her leadership skills. Cecilia also was honored to represent YWE girls in a roundtable discussion on HIV prevention for girls with the U.S. ambassador to Kenya, Michael Ranneberger, and leading organizations’ dignitaries.

Before the end of 2008, Cecilia had acquired enough retail and wholesale knitting clients to open a store at Nairobi’s Kenyatta Market.  However after  three years, a neighborhood incident in Mukuru slums where she lived which forced another change.  A couple living nearby was arguing about the husband’s infidelity which turned physical then caused their cooking fire to start a blaze.  Cecilia’s house was burnt down and she was only able to save a few personal items.  Her business (she made a lot of her knitted clothing from home) and home were destroyed, along with a whole block of neighbors’ houses.  Rather than continue her long commute to Kenyatta Market from Mukuru and pay the expensive rent, Cecilia decided to find a new location to live and operate a more profitable store.

She moved in 2011 to Kiang’ombe, a step up from Mukuru. She successfully re-established her business and expanded her school-based clients which allowed her to continue supporting her two siblings.  Unfortunately fate intervened again.  In late 2011, the City Council of Nairobi decided to destroy the part of Kiang’ombe in which she was living and working.  Cecilia was able to retrieve most of her personal effects and her inventory only just before the bulldozers razed her neighborhood.  So in late 2011, Cecilia moved her home and shop to Cabanas, also a step up from her Mukuru origins. But business was not good at Cabanas and her premises were too small to house both her work space and her residence.

Not to be defeated, in February 2012, Cecilia and her Kacece Creations once more moved, this time to Kayole a definite improvement from her prior facilities with a concrete-walled home (unlikely to succumb to fire!), running water and electricity—most of the time—as well as a toilet and shower.  Her shop is near the corner of an open area from where her sign can be seen, which should increase foot traffic.

Despite five years of incredible challenges, Cecilia is one of the most upbeat, resilient people Wendy has ever met.  Underlying Cecilia’s positive attitude and infectious smile are grit, determination, religious faith, and belief in herself that can inspire entrepreneurs everywhere.  Cecilia absolutely inspires Wendy. Just get out of her way and let Cecilia continue her success! Rick and Wendy truly believe that she is one of the many reasons who will enable Kenya and Africa to reach their full potential.