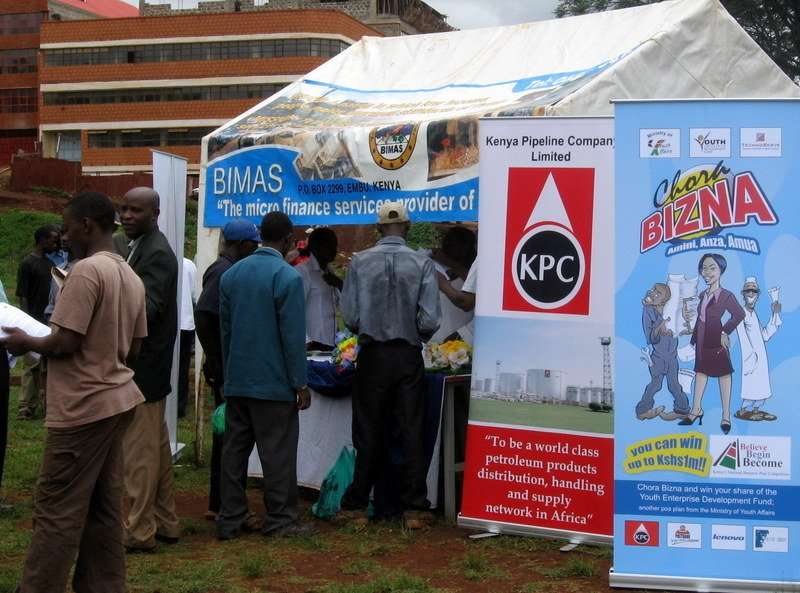 To kick-start youth entrepreneurship in Kenya, TechnoServe partnered with Kenya’s Ministry of Youth Affairs to launch a national business plan competition across Kenya. In March 2007, Kenya’s Vice President and the Minister of Youth Affairs officially launched Believe Begin Become (BBB) on television.  Wendy was actually in attendance along with other TechnoServe colleagues so was briefly seen on news clips of the event.

Besides eventually awarding a grand prize of one million Kenya Shillings (almost US$14,500) plus nearly an equal amount to the other top few winners, the aggressive goal was for 10,000 youth (ages 18 – 35) to learn about entrepreneurship. The BBB

competition began with participants submitting 3-page business plans for review by TechnoServe staff with the net result of qualifying cohorts of 30 or more people in each of ten districts across Kenya.  Wendy created the brief entrepreneurship training brochure—based on the JA Company program with permission from JA Kenya—which was distributed to close to 10,000 young people via many rural and urban concerts and gatherings. Rick and Wendy both participated in a couple of recruiting events and were impressed by the enthusiasm of the attendees in seeking the training material and taking it away with them (very few were left on the ground).

By the June submission deadline almost 6,000 applications were received.  By August the top 300 were accepted into the “mini-MBA” programs to be taught in ten regional venues by local business leaders, consultants and professors. At the end of this multi-day training, each participant worked with an assigned mentor to develop a 15-page business plan.  In October, each plan’s owner presented / pitched their idea to a judging panel.  In early November, the 100 semi-finalists were chosen, went through additional presentation-skill training, and pitched their ideas to a panel of sophisticated judges.  Each of the 20 finalists—along with every class in attendance–was recognized at the awe-inspiring award ceremony in the nearly-full Nairobi Convention Center in late November 2007. We believe that all 300 of the business-trained participants are making contributions to Kenya’s economy today.