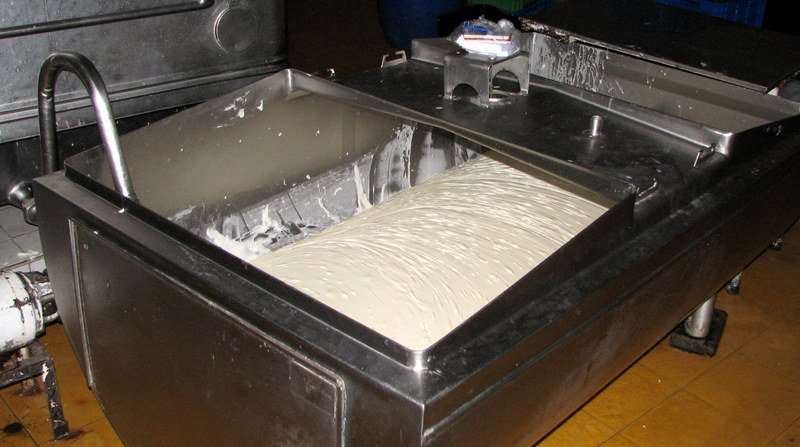 In collaboration with a major Salvadorean bank, TechnoServe began recruiting qualified dairy processors to create new products and markets while maintaining relationships with current small wholesalers or stores.  Two key dairy associations (Proleche and Asleche) recommended 38 potential dairy processors for qualification out of a possible 630 artisanal and commercial businesses.  Read an overview of the whole dairy program below the La Isla story.

Wendy and Rick visited one of the qualified processors, La Isla Cheese Factory in Sonsate, outside San Salvador.  The owner had already invested about US $300,000 in equipment and other capital costs over the 25 years he’d been in business.  He started working with TechnoServe in 2005 to improve his processing, product quality, and suppliers’ milk quality. TechnoServe

was guiding him to: tailor processes specific to types of cheese; improve his accounting, finances, overall organization and staff training; and reduce overall costs.

As a result of working with TechnoServe, La Isla had more diversified products and brands for target markets.  For example, La Isla had recently begun producing Quesillo cheese good for melting in “pupusas” (Salvadorean specialty baked in pupuserias or pupusa bakeries) and as well as three types of Queso Fresco cheeses.  They also had longer-aged Mozzarella and Colby (mild Cheddar cheese).

With TechnoServe’s support, La Isla had expanded in several other areas.  They opened their own branded stores as a result their first, competitive market study.  They had increased their processing to 10,000 liters of milk per day, up from 4,000 or 5,000; had begun to deliver milk to San Salvador; and were piloting a health drink made from leftover, previously-unused whey, for launch later in 2008.

La Isla had set aggressive business goals for its future: 1) have products in every Salvadorean supermarket and with very large cheese buyers; and 2) improve quality and production capacity to qualify to export cheese to U.S., which was already under investigation.

Overview of the Dairy Program’s Impact on Processors and Farmers

TechnoServe’s dairy program goals for ten processors and each of their 25 farmer suppliers’ groups were to: reduce costs; improve processes; utilize twelve collection centers to gather milk; and develop higher quality milk via better-fed cows. More specifically, the intent was for each of the ten participating dairy processors to double their then-current revenues and increase production by 20%, which would represent 11% of all of El Salvador’s produced milk and more than 18% of all the country’s processed milk.  As of 2008 after TechnoServe’s training and support, each of the contracted processors had a business plan which included creation of new products, brands, promotions, markets, and possibly retail outlets.  And each processor worked with 25 selected farmers who could consistently deliver high quality milk, 60% of which was processed into cheese and only one processor focused exclusively on milk.

Also the project would affect over 300 smallholder farmers* covering 11,000 Hectares of pastures.  TechnoServe was teaching and enabling these farmers to produce improved cow feed in order to be less impacted by price and supply fluctuations.  They were training farmers on how to improve pasture types through better, uncontaminated seeds, better soil, and better grass and crop rotation.  The hoped-for results would be to harvest 40 million metric tons of feed annually, i.e., add approximately 2 acres’s worth of feed per farmer.  They were also guiding the culling of low-producing cows as well as the purchase of higher-production new cows so that each cow would increase from making 5 liters (average per cow in El Salvador) to 8 liters of milk per day.  Additionally, TechnoServe was conducting cow health checks, particularly for “mastitis” which can significantly reduce milk production (as of May 2008, cow mastitis had decreased by 80%). TechnoServe technicians regularly spot-checked if farmers were watering down milk or adding un-approved additives.

This TechnoServe El Salvador dairy program would clearly benefit the lives, families, and communities surrounding all of the participating farmers and processors which in turn should improve the local economy.

For more El Salvadorean and other success stories, go to http://www.technoserve.org/our-work.