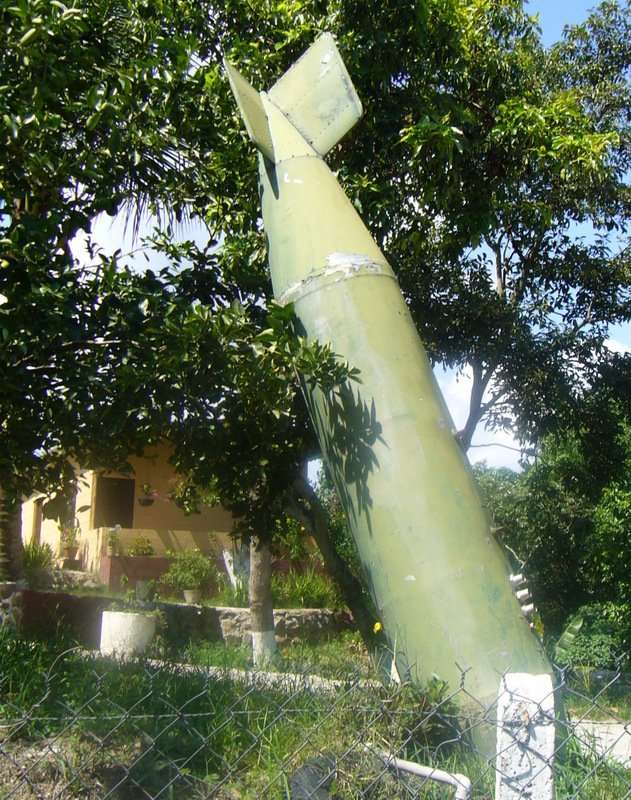 In order to create more jobs and income opportunities for the rural poor, El Salvador is boosting its agricultural exports. Besides TechnoServe helping farmers in key sectors to sell to export markets, it also runs entrepreneurship programs that empower people to create thriving businesses in a variety of sectors.*

In May 2008 Rick and Wendy’s visited five countries in two weeks for TechnoServe to observe the organization’s impact on clients in Peru, Nicaragua, Honduras, Guatemala and El Salvador.  The Walleighs arrived in El Salvador on Saturday

afternoon so had time to tour the area for a couple of days before meeting clients. Wendy and Rick’s hotel overlooked a not-too-distant, cloud-covered and mostly quiet San Salvador volcano, one of 24 active volcanoes in this small country.

On their tour, they noted a hopefully de-fused bomb and bullet holes in walls along the road into Suchitoto, El Salvador–sad remnants from the 1980 guerilla war which lasted until 1992 when peace accords were signed.  As their guide/driver/translator led the Walleighs through Joya de Ceren archeological park, he pointed out highlights of both unearthed and partially uncovered ruins of a village–estimated to have been built in 900 B.C. then buried in 420 A.D. by volcanic ash in the great Illopango eruption.  Scientists believe the village had been re-settled about 500 A.D., used mainly for religious rituals and/or community celebrations, then buried again by volcanic eruption in 640 A.D.  Pilpil Indians established a few homes from 1,200 to 1500 A.D. not knowing what was buried many layers below them.

On Sunday the Walleighs toured San Andres archaeological park.  This site contains ruins of a typical Mayan town that scientists estimate to have been a sizeable agricultural community from 900 B.C. until the volcano Illopango erupted in 420 A.D.  San Andres was resettled from about 500 to 900 A.D., and then mostly abandoned until 1600 when Spanish colonialists ran a cattle hacienda/ranch here and grew indigo crops for blue dye.  By 1658, another volcano buried San Andres in ashes again. Though it was re-discovered in 1891, San Andres was archeologically investigated more seriously beginning in 1941, declared a national preserve in 1977, and in 1980’s agrarian reform act, was expropriated to become a cooperative.

Talking parrots were part of the ambiance during lunch at Casa Suchitotoan restaurant above picturesque Lake Suchitoto.  Then Wendy and Rick walked through the town of Suchitoto. Their tour guide/driver/translator led them through the colonial Cathedral with its impressive façade and colorful interior with lovely painted and carved icons.  The plaza at the center of Suchitoto is typical of any former Spanish colony with the addition of a Sunday market where of course Wendy had to peruse for souvenirs.  El Salvador’s countryside is lovely, its food delicious, and people delightful.