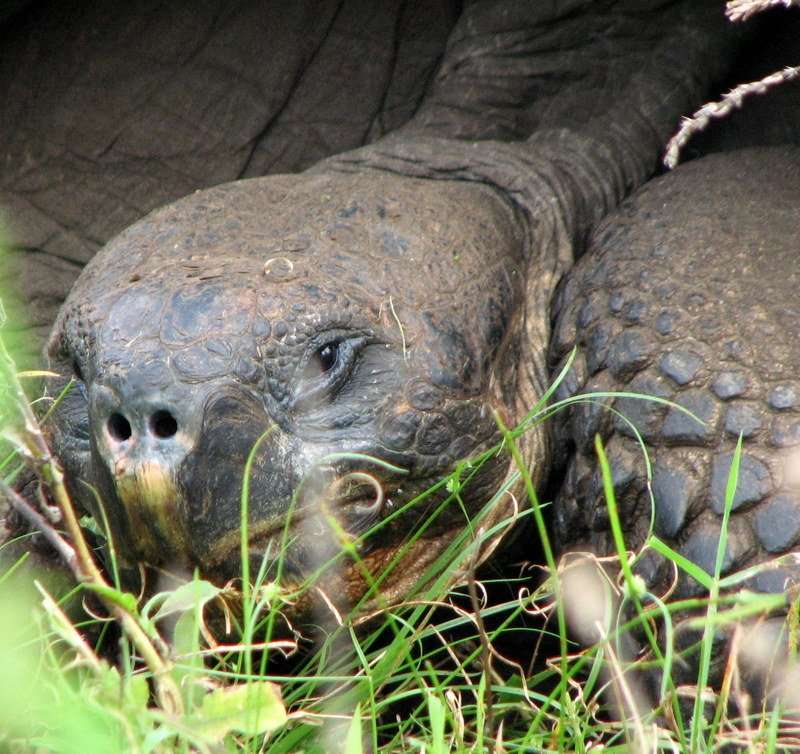 Giant Tortoises have been especially vulnerable for centuries since sailors took them for meat on-board whaling, military, or pirate ships.   Sadly, these animals had been kept alive on their backs for up to two years to serve as a source of protein…

On Santa Cruz Island, Rick, Wendy and Carolyn visited Giant Tortoises “in the wild” as they wandered (quite slowly of course) in one farmer’s field. The Galapagos National Park Service (GNPS) reimburses some farmers to allow the huge tortoises to have the freedom to rest, migrate, and eat in the fields as well as give access to tourists who love to meet and track them for a bit.  It

was astounding for us to come within a few feet of these ancient, venerable creatures out in the fields. Looking at their faces, it was easy to see a resemblance to dinosaur ancestors.

The Walleighs also met a famous cousin of these wandering tortoises, Lonesome George who was born long before 1912 and died June 2012.  Under GNPS’ protection, George was a male Pinta Island tortoise (Chelonoidis nigra abingdonii), the last known individual of his subspecies.  In order to maintain individual species’ integrity, GNPS typically prevents cross-breeding of animals.  However they did encourage Lonesome George’s interest in ladies from other tortoise species but to no avail. Within their species, other islands’ endangered tortoises had been successfully bred in captivity for later placement back in the wild.  Instead, in his last years, George was known as the rarest creature in the world and served as a potent symbol for conservation efforts in the Galapagos and the rest of the world.  So the Walleighs felt privileged to meet George before his demise.

Of the many endemic or native animals unique to the Galapagos are the world’s only Marine Iguanas.  Totally black when young, they become mottled red at maturity.  They are quite social, often gathering in rugby-like scrums to get warm in the sun. When courting, they add green to their skin so are nicknamed “Christmas Iguanas.”

Other endemic animals in the Galapagos include: Brown Noddy birds; Lava Lizards; Lava Gulls; Red-Beaked Tropic Birds with antenna-like tails that adds real grace to their flight; Lava Herons; five species of mockingbirds; and Galapagos Hawks, which from high in the sky can eye lunch in the water then soar and swoop to get it. The Waved Albatross lives on Espanola Island to court, mate (for life), breed and raise youngsters.  They are the Galapagos’ largest flying birds but which technically don’t fly.  The Waved Albatross’ actual flight is beautiful. They take off from cliffs to soar but then land awkwardly, belly-flopping. Parents click-clack their beaks, bob their heads, and squawk alternatively as part of their mating ritual.  Their large eggs birth chicks that are white, pudgy, fluffy, and always hungry. Both parents hunt for food for their chicks; they eat the food; and then before regurgitating to the babies, their stomachs add an oil that helps the chick grow healthy.

Some animals are found elsewhere in the world but had arrived in the Galapagos, some perhaps on early ships.  For example, this probably happened with Sally Lightfoot Crabs, which are black when young, then become gloriously colorful at maturity. In other cases, such as Brown Pelicans, maybe a particularly adventuresome flock arrived exhausted on one island then just stayed.  Surprising to the Walleighs were the California Sea Lions which populate all the islands, breeding and living in colonies, but are smaller than their mainland cousins who are seen all along the California coast.  That had to have been a very long swim!