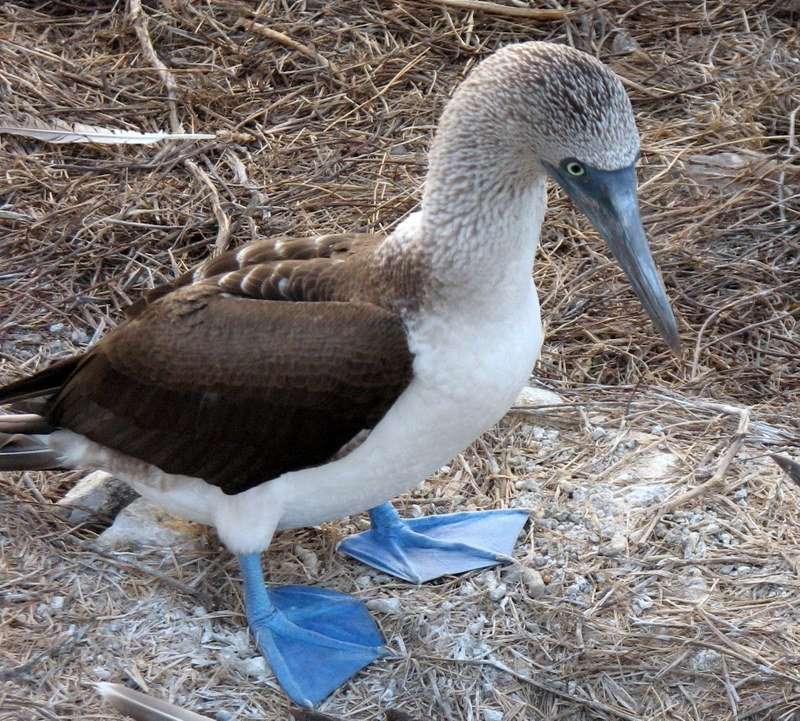 Rick, Wendy and Carolyn loved observing how all the animals were “ecologically naive” –no fear of predators–so they could get very close. While Giant Tortoises are the Galapagos’ emblem, Wendy’s  #1 priority was to see the Blue-Footed Boobies.  “Booby” may be derived from the Spanish “bubie” or dunce, possibly because Spanish sailors saw them waddling as if they were drunk or stupid.

While the derivation of “Booby” is uncertain, there’s no doubt about why Blue-Footed is apt! With their unique blue feet, they are a handsome sight, even when caught in funny antics, like scratching their heads with their feet!  Annual mating rituals

precede the breeding then raising of chicks–who definitely look like white, pudgy fluff-balls.  Because they are ecologically naïve, quite a few approached up close and personal!

Another Booby species in the Galapagos is the Nazca, formerly called Masked Booby for obvious reasons once they are observed. Interestingly, despite their amazing expertise in virtually all topics on the Galapagos, none of our guides knew the scientific rationale for changing the name, other than association with the Nazca Tectonic Plate below the islands. In any case, the Nazca Boobies are lovely to look at even if their feet are less colorful.  And their babies are just as adorable, white, pudgy fluff-balls.  However, the parents have an “heir and a spare” policy for each breeding cycle, in case the older chick is sickly.  But if the heir is healthy, the “spare” is pushed out of the nest to die. Nature can be cruel…

Though she came to the Galapagos for the Blue-Footed Boobies, Wendy’s heart now belongs equally to the Red-Footed Boobies with their prehensile feet that can cling to the branches on which they rest, build nests, and cuddle with their fuzzy Booby babies! And boy, does this totally unique-to-the-webfooted-world prehensile capability come in handy when one has to scratch!  Though typically brown and tan, the Red-Footed Booby’s coloration can vary to white with black-edged wings.  To be certain this coloring is not a Nazca Booby, just note if the bird sits on a tree branch, which means it’s definitely a Red-Footed Booby.

The Walleighs saw a few Short-Eared Owls on Bartolomeo Island on rocks about thirty feet away, but the closest was less than two feet from them on the walkway railing, where it just calmly watched them watching him!  They saw several of the 13 species of finches that Darwin discovered on the islands.  And the Swallow-Tailed Gull was the prettiest gull they’d ever seen, particularly unusual with the red circle around the eyes.  And though Great Frigate Birds are beautiful in flight, they have a bad reputation as thieves.  They swoop down on other birds, especially Boobies, who have just captured fish, and steal the fish for themselves or their families.  Frigates are however good parents, with the father providing food and sharing egg-covering duty. The males are distinctive in mating season when the red pouch beneath its beak inflates to a large balloon which apparently is quite attractive to prospective wives.  One can distinguish a Frigate baby from a Booby mainly by its beak shape and a bit of rusty coloring on its otherwise all white feathers which molt to black as they mature. The parents also often have an “heir and a spare” each breeding cycle.