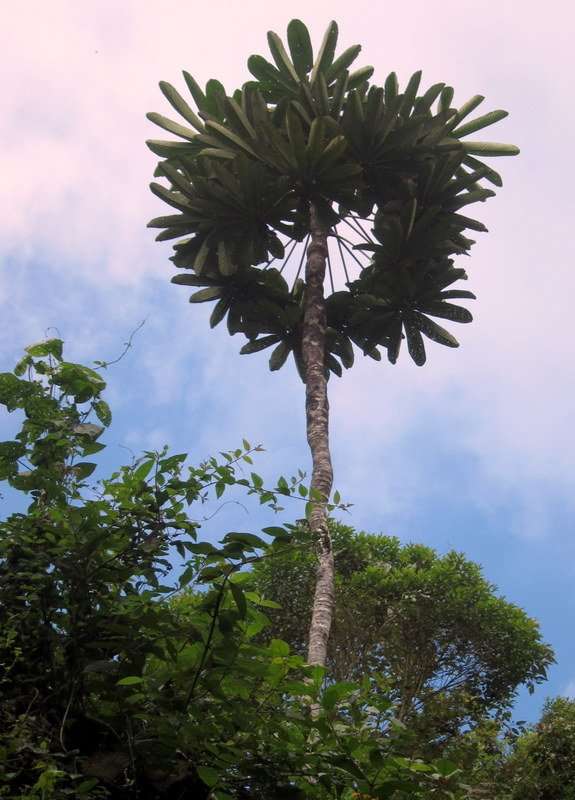 About 100 miles northwest of Quito lies a huge mountainous cloud forest region at about 9,000 ft. altitude. Bellavista private preserve has an eco-lodge, scientific station, steep trails, and hundreds of birds, insects, and exotic semi-tropical plants within its mountain-side jungle.  This required a full-day visit since the drive to the cloud forest took almost 3 hours.  The gate to Bellavista Cloud Forest Preserve looked appropriately “tropical jungle” when the Walleighs and Carolyn arrived.  After a lovely breakfast at the eco-lodge, their guide led them onto their first trail into the cloud forest.  Initially they could view the distant mountains but within a few minutes, the clouds literally closed in on them. Through this thick mist, they saw many unique trees, plants, and birds, including a Toucan Barbet and a Plate-Billed Mountain Toucan on trees above their heads.  A little further was the hammock-like lair of a tarantula–who was not resting there at the moment. A brightly-colored map of the preserve’s trails

The most prevalent birds in the cloud forests were tens of species of hummingbirds.  Because they would be hard for visitors to view on jungle trails, Bellavista’s work-around to ensure happy guests was to set up a series of feeders near the entrance to the lodge. One of the most fascinating was the purple-throated hummingbird who rarely landed because it took so much energy to take-off, he’d just have to immediately feed again.  The speed at which the wings move made it almost impossible to see them but a quick-shuttered camera could capture light outlines of the wings.

Cloud forest flora were as unique as the fauna. Heleconia plants are cousins to banana “trees” and Bird of Paradise plants.  Many trees are hosts for epiphytes like orchids and bromeliads. Shiny little insects played their part, decomposing the flora for the next life-cycle. Both the birds and the plants in this semi-tropical, cloud-infused forest were fascinating.

On the way back from Bellavista into old Quito, the Walleighs’ tour bus experienced one of the infrequent but powerful hailstorm,* which covered streets and fields with an inch or so of “snow” as well as made tunnels and down-sloped walks and streets treacherous.  The hail generally caused chaos for several hours in Quito.  Certainly this was an unusual end to an unusual day.

*Those who have read about Rick, Wendy and Carolyn’s hail storm experience in Swaziland should understand why they were so nervous as the hail started to fall.  However, the hail stones remained more like large snowflakes rather than the softballs that destroyed their car in Swaziland.