Ecuador’s Avenue of the Volcanoes–Still Actively Building the Andes 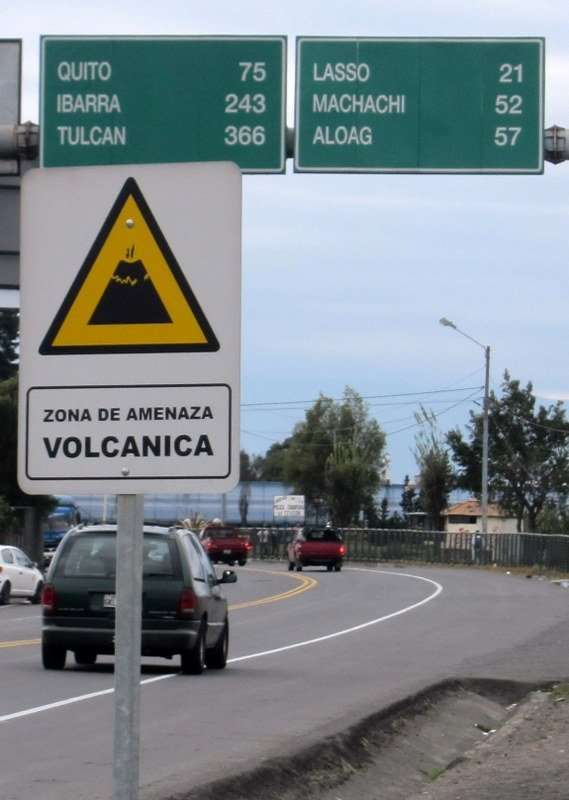 Journeying from the jungle–visit Ecuador’s Amazon Basin Jungle in El Oriente (The East) to view our adventures there–to the mountains on the same day meant totally readjusting our minds and bodies again.  We left the Napo River (2,500 ft.) for the Andes at 12,000 to 15,000 ft. elevation. The weather transitioned from 150% humidity and 85o to an average 45 to 55o. This meant that our damp suitcases and clothes took two days to dry out in such cold.  Both this ruggedly dramatic countryside to the far south of Quito and towns along the way are fascinatingly different from those in Ecuador’s other three regions (coast, Galapagos, Amazon Basin).  The term Avenue of the Volcanoes is derived from the fact that Ecuador’s many active volcanoes form a spine of mountains with lush valleys down the country’s center.

300 Year Old Hacienda for a Hotel

The Walleighs stayed in Hacienda La Cienega hotel, which dated back 300 years in the town of Lasso, and was named after the Lasso family, one of Ecuador’s most prominent. Both the Plaza and Lasso families had produced Presidents, Ambassadors, and other leaders.  In that same area they also toured the grounds of St. Augustin de Callo Hacienda.*  The

Plaza and Lasso families who still own it preserved its history since it is considered to be the only lived-in museum with both Inca Imperial and Spanish Colonial architectures.  Dating from the 15th century, several buildings have ancient Incan stone walls, plus the “newer” buildings are updated from the Colonial period (1700s) when the Augustine monks operated it. The most fun there, however, was feeding the real alpaca herd!

*The Hacienda was noted by the famous chronicler Cieza de Leon (1536). Part of the property preserves an Inca Palace or temple built by Tupac-Yupanqui (Inca Emperor) or Huayna-Capac in the 15th century.

Since roses now are one of Ecuador’s top three exports (oil being #1), the Walleighs were lucky to tour Verdillano Rose Farm, one of many belonging to Roses & Roses Ltd. At Verdillano Farm, a staff member guided them through one of its several, multi-acre greenhouses.  We learned that Chamomile (yes, for tea) is planted at the ends of many rows of roses because it picks up and therefore early-detects diseases that can affect roses, thus protecting the high-profit plants.  Long-stemmed roses require incredible, labor-intensive protection often with each flower being covered to prevent mildew.  Who knew that Russians prefer 90-inch stems, Europeans 45-inch and American 30-inch stems??? We saw only a few varieties of gorgeously-hued roses ready to be shipped, representing just some of 30 or more varieties grown on this farm for global markets.

Though the Avenue of the Volcanoes’ countryside was quite rugged, it was dotted with picturesque little towns along the main road tracing the “spine” between two long mountain ridges in the middle of Ecuador.  Many of these towns make and sell distinctive products.  For instance, the town of Salasaca is known for its woven goods spun by hand, then loomed by women in the Peruvian Incan style, and sold in a daily market. Pelileo is known for manufacturing and selling blue jeans.  The town of Salcedo has many shops which sell its renowned, layered, cone-shaped ice cream treats. Latacunga is famous for its fried pork dish and accompaniments call Chugchucaras, with Rosita’s restaurant being “the hot spot” for these dishes. The day Rick and Wendy drove through these towns happened to be the 1st day of school so during the course of the day, they saw children both on their way to school and then celebrating and gossiping about surviving that experience.  They also observed some youth leaving town on the back of a truck which, though it’s illegal to ride in an open truck-bed, seemed to be the areas’ most popular form of transportation.

This was definitely a cold region of Ecuador.  At Quilatoa Crater Lake, a mere 12,500 ft. elevation, Rick and Wendy were wearing every clothing layer in their suitcases plus they bought scarves and gloves!  Though they started to hike down the steep trail leading toward the crater, it was too cold, dusty, windy, and slippery so they turned back.  Next stop was Cotopaxi National Park.  Given its height and the season, the still-active Cotopaxi volcano was often topped by clouds so they had to take pictures from a distance the one time the clouds opened up and provided an unobstructed view! It is the most active volcano in the region, spewing smoke and sometimes other debris once or twice a year.  Nothing prepared the Walleighs for the wind and lack of oxygen at the parking lot at 15,000 ft.!  They decided not to hike up to the official climbing base at 16,000 ft. where even less oxygen would be much less fun!

Their next stop included thermal activities that often accompany volcanic regions.  Wendy and Rick entered Banos (“baths” in Spanish) noting many signs warning them about the thermal and occasional volcanic activity.  They also heard that over the years volcanic ash, flying boulders and lava flows have threatened the town several times.  That is why their travel agent booked their hotel, Hacienda Manteles, away from Banos, above the town of Patate* in order to be shielded from any volcanic eruption.  Manteles was owned by Sr. Duran whose grandparents had bought the land.  He recently had built the new Hacienda, added more farmland, was doing sustainable community and agricultural work, and was earning a Ph.D. at University of North Carolina in Community Development. The view from his Hacienda was breath-taking–patch-work crops climbing to the top of the steep mountains all around. One of the nearby crops included vines growing Tree Tomatoes, which are tart, plum-like fruits (found in East Africa as well) but that have the seeds and texture of tomatoes. These fruit are commonly grown in southern Ecuador’s Tungurahua Province where Patate and Banos are located. Further down the road were greenhouses where more delicate fruits and vegetables were grown.

*Patate is called the Valley of Eternal Spring at 7,000 ft. elevation and average 65o temperatures.

Avenue of the Waterfalls and Banos

While driving in and around Banos and south on the way to the “Avenue of the Waterfalls,” Rick and Wendy saw many signs pointing toward appropriate, nearby shelters in the event of an eruption!  Some of the larger falls had cable cars taking tourists close to them, so our guide stopped for the Walleighs to do that. With other locals, they watched the cable car drop off passengers who could walk closer to the falls and then return to their side of the canyon. Though the cable car itself reminded Wendy of a window-washer’s bucket hanging 100s of feet in the air (and powered by a small motor), somehow she agreed to head about 1/4 mile across this deep canyon, though she did hang on for dear life.

After the harrowing cable car ride, Rick and Wendy decided that they deserved an afternoon at a thermal-spring spa. At Luna Runtun Hotel, they ate lunch overlooking the spectacular valley with the city of Banos below, then enjoyed the same view from the thermal pools occupied just by themselves.

After Banos, it was a four-hour drive back to Quito, one more overnight at Hotel Patio Andaluz, then a flight back to the U.S.  Rick and Wendy had expected that they would love the Galapagos and enjoy Ecuador.  But actually they loved all of the places they visited in the country and were incredibly impressed by the amazing diversity of geology, ecology, biology, and people.

They also heard that over the years volcanic ash, flying boulders and lava flows have threatened the town several times.