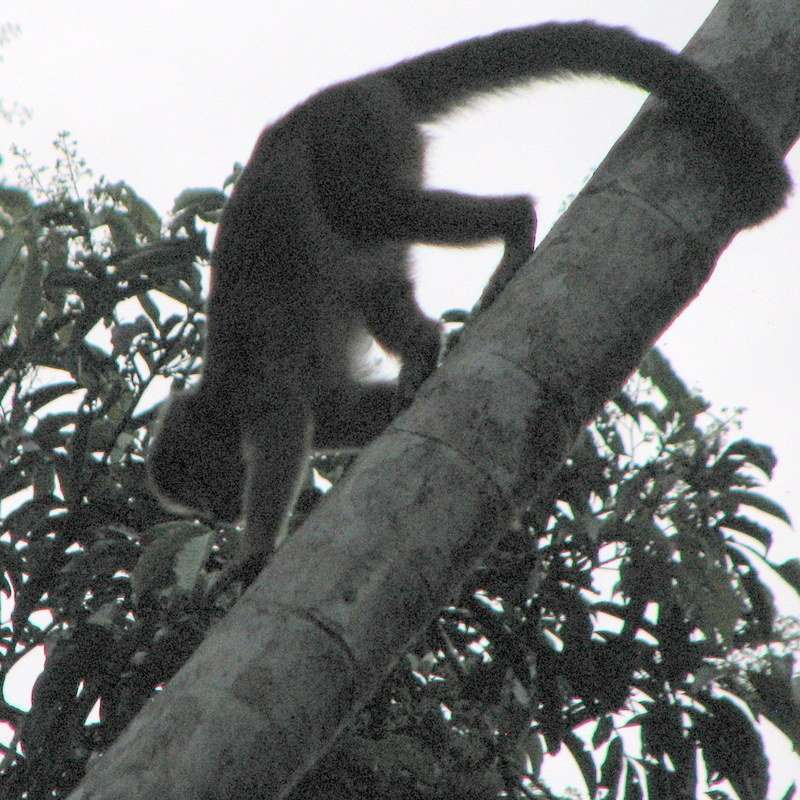 Traveling to the jungle from Quito meant many changes: leaving Quito at 9,400 ft. to be at less than 2,500 ft. altitude in Ecuador’s El Oriente (Eastern in Spanish) Region was only the first.  Then came flying for about 30 minutes to Coca (pop. 20,000) along the Napo River; taking a ten-minute bus ride to the river dock; zipping for 2 hours in a “motorized canoe” at least one hour past where all roads end; boarding a regular canoe to be paddled for another 2 hours up a shallow stream.  Upon arriving at our remote, rustic compound, Rick and Wendy had to coat themselves with repellant to fight mosquitoes and, worse, survive what felt like 150% humidity at about 85o F where every piece of clothing became damp.  Wendy got the worst heat rash in her life!  BUT it was amazing–with the caveat that visitors should be prepared for very humid heat.  “Birders” would find this place to be paradise!

This Jungle Cruise was not in Disneyland

Once they arrived at the city of Coca’s shipping dock, the Walleighs had to wait until the luggage was loaded onto 2 motorized canoes before the 40 passengers, guides and eco-lodge staff could board. Once under way, the boat zigzagged speedily to

avoid sand bars down the Napo River. The boats stopped briefly when the Ecuador “Naval Armada” aka river police forced one of the boats to stop for random inspection–for no reason other than that they could. Since the road to the many oil drilling locations (which are greatly controversial, with the good/bad news that Ecuador gains huge revenues from the oil) ends less than one hour from Coca, barges must carry up and down river the huge trucks and equipment needed at the oil fields. These barges were very different from to the Walleighs’ final transport mode, a canoe paddled by two “community guides” who were part of Anangu village which operates the remote eco-lodge, Napo Wildlife Center.

After being paddled for 2+ hours up the shallow Anangu River (really a stream with one to two feet of water), the Walleighs reached the lake in front of their lodge.  Napo Wildlife Center is a complex of bungalows and an open-sided building, consisting of a combined, dining room, bar, common area, library, kitchen and observation tower. Planted in front were lovely plumeria-like flowers and bright heliconias, among other flowers and shrubs. Most of the cute thatched-roof bungalows overlooked the lake and its lush shoreline.

Probably Wendy’s favorite critter at Napo Wildlife Center was the Leaf-Cutter Ant. Each ant worker, soldier, etc. has a clear role and responsibility while carrying their contributions back to their colony of approx. 8 million ants. Each worker carries 20x their own weight in multiple trips every day. Pretty impressive 24×7 organization!

Lena, their guide for the jungle, was nationally certified in tourism, so she knew all about the fauna and flora.  The Walleighs mostly saw birds and bugs plus a few mammals and reptiles which literally crossed their paths. Squirrel Monkeys were the most prolific mammal–always busy with places to go and things to eat. Capuchin Monkeys were less prolific than Squirrel, and one was seen only once, briefly.  A single Wood Peccary, a distant relative of pigs, darted onto the stream bank next to their canoe, skidded into the water then swam across and back again.  Its head was wounded, possibly in a fight with a leader in the herd that they heard thundering deep in the nearby jungle but never saw.

A couple of times Rick and Wendy’s canoe was inspected by the lake’s Giant Otter Family.  They also came close to a Cayman, the jungle’s largest predator.  Its eyes and snout floated above the water line, hiding another 6 to 12 feet of scaly body below the surface. Also in the lake were large turtles. Though encouraged to swim in the lake to cool off, the Walleighs declined, preferring not to share the water with turtles, Caymans, otters and other un-named creatures.

Part of one day Rick and Wendy visited the Anangu village’s Interpretation Center recently built by the local women to demonstrate typical life in a Quichua clan. Prior to that center, only the village men were involved in the operation of the Napo Wildlife complex.  The women wanted to play a role, too.  Besides discussing food, family life, basket weaving, and house-building, they showed how dancing is a key part of a village’s culture.  Of course they like to drag the tourists to join a dance–clearly Rick towered over the indigenous woman.  Lastly, the village’s Quichua Shaman performed a ritual cleansing ceremony on one of the eco-lodge’s guests. No surprise but locally hnd-made products were for sale in the Interpretation Center’s gift shop, which gave the Walleighs an opportunity to feel as though they were making a direct contribution to the local people (only partially a rationalization!).

Parrots at Clay Licks, Hoatzin and Other Birds in Paradise

The funniest and one of the most colorful birds called Hoatzin (what-SEEN) had crests resembling punk rockers.  Their groups’ distinctive calls sound like motorcycles revving up or air blowing through bellows.

Several varieties of local parrots and parakeets–mostly green with highlights of bright blues and reds—often visit clay licks along the Napo River (only 2 hours’ paddle away).  These are exposed areas of clayish dirt that contain special minerals thought to aid the digestion of the foods / seeds eaten by these breeds.  To minimize their exposure to predators like hawks, at one clay lick, the parrots and parakeets slowly and tentatively climbed down the vines covering the clay lick until there were large groupings. At the other nearby clay lick the birds had to fly into the mouth of a cave to find the minerals underground.

Other unusual sights included Orenpendula birds’ sack-shaped nests hanging down from the branch-ends of many trees, built this way in order to protect their families from tree-climbing predators. The nests seem sturdily built with a small opening near the top for family security.  Unfortunately these nests are so well-built that other birds take them over!