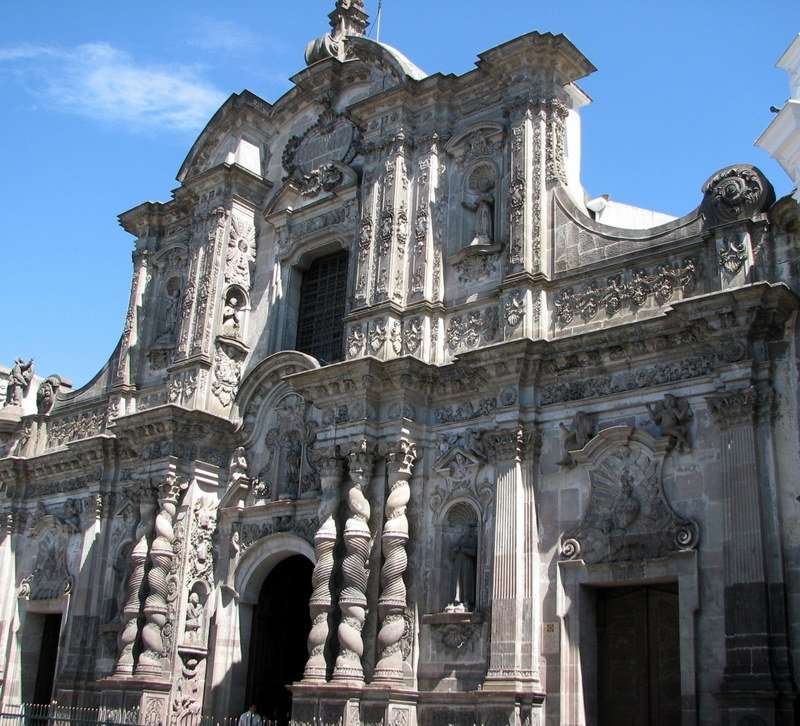 Ecuador is a relatively small country compared to most of its South American neighbors.  In fact over the years both Peru and Colombia have stolen border lands from Ecuador.  Straddling the Equator that gives the country its name, it has such a range of animal species that it is one of the 17 mega-diverse countries in the world. With its first human population tracing back to almost 9,000 B.C.E., many cultures have stamped lasting impressions on Ecuador–particularly the Incan and Spanish Empires.  But now its biggest tourist attraction is the archipelago of The Galapagos, with hundreds of animal species, many unique to this ecological system.

Before flying to Guayaquil then the Galapagos, Rick, Wendy and their intrepid friend Carolyn toured Quito, capital of

Ecuador.  At 9,400 feet elevation, just walking around literally took their breath away. Patio Andaluz, their charming small hotel, was located in the heart of the Spanish Colonial district with buildings dating from the 1500s.  Their wonderful tour guide led them around the old city. In front of the majestic state government building, soldiers dressed in the 1800s uniforms of the “Granaderos de Taqui” who fought to liberate the Republic. The Walleighs visited the Basilica of Quito which towers over the Old City–literally and figuratively; wandered across the Plaza de Independencia and other lovely plazas surrounded by colonial buildings; and toured inside (no pictures allowed) and around reputedly the most beautiful church in Latin America, the Compana de Jesus.  La Ronda, a street known for infamous clubs like The House of the Bad Black Woman, may have calmed a bit in the last decade or so but is still known for its nightlife.  Up and down most of the old city streets were colorful shops, intriguing sites, and typical Ecuadorans.

The guide* and driver took them up to The Virgin of Quito aka Virgin of the Americas, a huge statue which reigns down from one of many mountain ridges above Quito.  They also took the Teleferico cable car to the top of Lomo Cruz, one of the mountains above the city—elevation 14,000 ft. From there it was easy to see old volcanoes and across both modern and old Quito.

They also toured the beautiful Augustin Cathedral where the declaration of the Republic was signed.  Its grounds and convent are well-preserved from the Spanish Colonial period and contain representative samples of what is known as the Quito School of Art.

*Because tourism is so highly valued in Ecuador, all official tour guides are certified then regularly re-certified after further study.  Though the National Geographic guides were the best we’ve every experienced, all of our other guides were excellent–knowledgeable about culture, geography, biology, etc.

After being 9,000 to 14,000 ft. above sea level for a few days, Rick, Wendy and Carolyn flew into Guayaquil–at sea level.  Their tour guide and other locals in Ecuador’s largest city seemed to resent being treated as the ugly step-sister of Quito.  But compared to Quito’s history and charm, Guayaquil is a non-descript but modern city. It had burned down so many times over the years, that subsequent reconstructions just ignored history in favor of convenience and commerce.

Their guide took them to the main Cathedral next to a nice plaza with a perfunctory statue of Simon Bolivar, Ecuador’s Great Liberator. They then visited streets aka “calles” near the Guayas River promenade, which area was being rejuvenated for tourism. Nearby, numbered steps led up Santa Ana Cerro into Las Penas, the poor but colorful section of Guayaquil.  But Rick, Wendy and Carolyn chose to just look at them in appreciation rather than climb up for a questionably improved view of the river and city.  The most fun part of Guayaquil was Iguana Park, an open plaza in front of the main cathedral where iguanas had learned it was safe to wander and congregate.  For a few years, that was not the case because imported Chinese workers stole them in the night for food, but now police patrols and night-time, closed circuit cameras keep the iguanas safe again.  These iguanas were totally unafraid of the many humans staring at them in the park, literally coming within inches of people.  They hung out in the trees, in the fountain, on the grass, sometimes standing so still they seemed like statues.  Truly that was the highlight of Guayaquil.