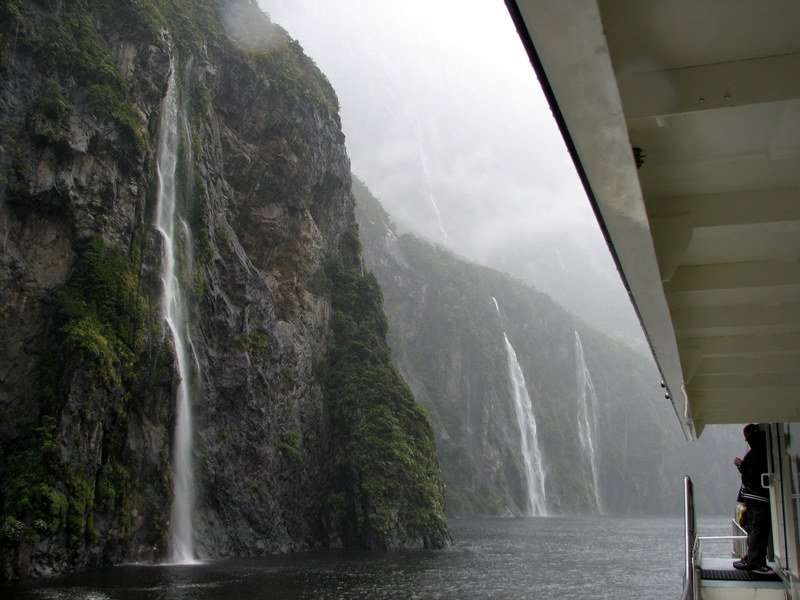 Despite the cool and sometimes rainy weather on New Zealand’s south island, it was Wendy’s favorite of the two islands.  The variety of dramatic scenery in such a relatively small area was quite impressive.

spectacular Waimakariri River gorge via the Otira Tunnel to Greymouth.

From Greymouth they drove to Franz Josef village.  They visited the two most accessible glaciers nearby, the Franz Josef and Fox.  From the parking lot, Rick and Wendy walked about one kilometer along a muddy field, past heavily flowing waterfalls to the Franz Josef glacier.  Though not close enough to touch it, they could see how the moving glacier carried dirt and rocks along, and they watched the chunks of ice, fallen from the glacier terminal, being swept away by the river below. The previous day’s torrential rain had flooded and closed down the walkway in front of the Fox Glacier, making it impossible to approach.

North of the glaciers along the west coast was Punakaiki Point in Paparoa National Park.  Besides being along a surf-pounding shore, these “Pancake Rocks” looked as though thin layers of rock had been glued on top of each other, with softer areas eroded between by the sea.  Further north the Otago Peninsula projects out from Dunedin to create a deep, protected harbor and a beautiful extended coastline.

The bus stopped a few times along the way on the almost five-hour ride from Queenstown to the where Rick and Wendy boarded a ship to cruise the fiords on Milford Sound (seen in The Lord of the Rings movie trilogy).  At one stop they saw a chasm that was so full of water that the river churned white as far as the eye could see. While waiting 15 minutes in the pouring rain to drive through the one-lane tunnel under the mountain range, they had time to admire many newly rejuvenated waterfalls.  On board the Milford Sound cruise ship, the Walleighs began to appreciate why this exotic scenery was a perfect backdrop for parts of The Lord of the Rings trilogy.  While on board, after eating their boxed lunches, they returned to the outside deck to see the dramatic waterfalls thundering down the cliffs on both sides of the channel, everywhere they looked.  Because some of the cliffs were nearly 3,000 feet meters tall, some waterfalls seemed short though actually taller than Niagara Falls.  Though she got soaked, Wendy will always remember the sound and feel of the white water of a falls tumbling down on her—on the deck–from just a few feet away from one large waterfall.  However, the fur seals on the rocks along Milford Sound were perfectly happy to relax since the rain is less wet than the ocean.

Perhaps the highlight of the Southern Alps was Mt. Cook and Aoraki National Park.  The Hermitage Hotel where the Walleighs stayed faced Mt. Cook which literally glowed in the sunsets.  One of their two most memorable activities in the park was their 10km/ 3.5 hrs. round-trip hike into Hooker Valley. Everywhere along the trail were amazing views of Mueller and Hooker Glaciers.

Located in Aoraki Park, Tasman Glacier is New Zealand’s largest Glacier and one of several still expanding. The second most memorable activity near Mt. Cook was the Walleighs’ zodiac-boat trip on the Terminus Lake at the foot of the Tasman Glacier* with a knowledgeable guide and eight other passengers including their friends. The lake was gray-colored because the water was filled with “glacial rock flour”.  Though not seeming that tall, as they approached the glacier terminus, it was actually tens of feet high, covered with debris, and comprised of millions of compacted ice chunks.  They rode by many icebergs which had “calved off” the Tasman Terminus.  The physics of icebergs requires 10% of its surface above water and 90% below.  If the visible 10% melts, more rises from below. If the iceberg gets too top-heavy, it will fall over to re-gain its 10 vs. 90 balance.  This results in the odd formations like a rabbit, dog’s head, and dragon.

*The February 2011 earthquake that devastated Christchurch as described in the New Zealand Overview page literally rippled out to affect most of the south island, including Terminus Lake at Tasman Glacier.  Apparently that earthquake caused a 30-million metric ton ice chunk to calve off which cause a tsunami-like ten-foot wave across the Tasman Glacier Terminus lake.  No one was hurt but that must have been a heck of a zodiac ride!

One of many interesting stops on the south island’s eastern coast between Dunedin and Christchurch was Moeraki Rocks Park, a privately conserved beach with very unusual formations.  Before the conservation effort, tourists took many of the smaller rocks so only big boulders remain, which when dry look like huge turtle shells.  The round shape is not due to erosion but from chemicals that naturally bubbled up millions of years ago, almost like the formation of a pearl. The various layers can be seen as these other-worldly boulders disintegrate from ocean erosion.  They reminded Wendy of the rocks from a long-ago Startrek episode where an alien Horta mother made of silicon tried to protect her silicon eggs from destruction by the human miners. Spock learned this after doing a Vulcan mind-meld with the Horta mother!