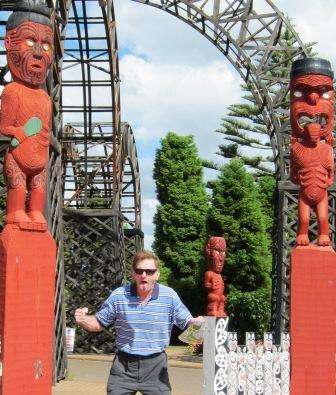 Known best for being the Maori cultural center and its active thermal fields, New Zealand’s north island is also warmer in temperature than the south island.  So the Walleighs could enjoy part of this island in shorts and t-shirts.  Their route was from Wellington to Auckland with many fascinating stops, including time in each city.

On the north island, Rick and Wendy traveled along a lot of beautifully rugged coastline as well as inland along very winding narrow roads and one-lane bridges.  Some of the many interesting stops were associated with New Zealand’s many lakes,

rivers, volcanic and thermal activities.  On the way to Rotorua they drove around the facilities at a huge geothermal electrical generation plant on the Waikato River near Lake Taupo.  Nearby that lake they briefly viewed the Blue and Green Lakes—yes, named for their colors.

At privately-owned Tokaanu Thermal Park, they walked to the edge of the steaming pools and bubbling mudpots.  This proximity would never be allowed in any government facility, though this preserve did have a warning sign indicating the 100o C temperature of the thermal features.  At Te Puia Thermal Preserve, the Walleighs observed from a safer distance the wide variety of the thermal features’ shapes, sizes, colors, and actions. They learned that the color of the pools was caused by the chemical content of the rocks, the type of algae, and the heat of the water. Puhutu geyser flowed into hot water which cascaded over crystalized silica rock shelves, formed into many different shapes.  And they benefited from a healing steam-bath in the Wai-o-Tapu spa in Rotorua.  See a “blurping” mudpot video at:

The Land of Mordor at Mt. Tongariro National Park

Rick and Wendy drove to Mt. Tongariro National Park, which highlighted New Zealand’s volcanic origins. A few volcanoes are still active, though the three main ones in the park–Mt. Ruapehu, Mt. Ngauruhoe, and the classic, cone-shaped Mt. Tongariro–are supposedly inactive.  After the Walleighs drove to the Chateau Hotel in the park for an overnight stay, they had a quick lunch then headed for the hiking areas that looked like the evil land of Mordor in Lord of the Rings–because that is where it was actually filmed. Thankfully using the heavy parkas provided at the base, they rode the gondola to the top of Mt. Ruapehu where they experienced high winds, cold temperatures, and a full view of the surrounding moonscape.

The city of Rotorua is considered the capital of the Maori culture and is populated and surrounded by many thermal areas. After arriving, the Walleighs visited Rotorua Museum, which explained the city’s history on the shore of Lake Rotorua.  The city’s reconstructed Blue Baths building was one of the many thermal facilities which had tempted tourists to “take the waters” since the late 1800s. Rick and Wendy also wandered through Rotorua Gardens, which displayed both lovely flowers and Maori totem carvings.  One of the garden’s entrances is guarded by Maori carvings which Rick tried to imitate with a traditional Haka dance face.  The Arts & Crafts Center demonstrated old and new products—with a few local artisans there–using the traditional Maori skills like wood carving and weaving textiles, and embroidering clothing with beads and feathers.

The Walleighs decided to do a very tourist-y activity, visiting a “living cultural village” where they would partake of the traditional Maori feast called Hangi.  Tamaki Village’s mission is to seriously preserve the Maori culture so before the programs, the audience was told not to laugh or make negative remarks about what would be seen.  Maori warriors chanted and performed the Haka to greet and frighten the audience.  Then Rick and Wendy wandered in the “interactive” section where they talked to traditionally dressed Maori women who demonstrated the hand-eye coordination skills in tossing sticks and twirling leather straps with balls at both ends.  A Maori warrior showed them the face used to frighten enemies as part of the Haka chant.  After talking and viewing other traditional Maori activities, the Walleighs feasted on the Hangi meal–consisting of many layers of food steamed in a special fire pit–and were entertained by more dancing, chanting, and game-playing.

Another nearby tourist-y activity was the Agrodome agricultural park, representing the importance of sheep to New Zealand. One of the live activities included a parade of about 20 varieties of sheep onto a stage, with a discussion of the differences and advantages among the breeds. Wendy actually tested the wool pelt’s thickness of a new acquaintance (by now has probably been eaten as a lamb roast, chops, medallions, etc.).  Sheep were sheared in a brief real-time competition along with explanations about the process.  E.g., an average shearer can remove the wool from a sheep in 2 minutes—but a new world record of less than 30 seconds had been recently set in New Zealand. To demonstrate that even sheep-herding dogs take their careers very seriously, they raced against time around a track showing their skills on real animals, much to the sheep’s dismay.