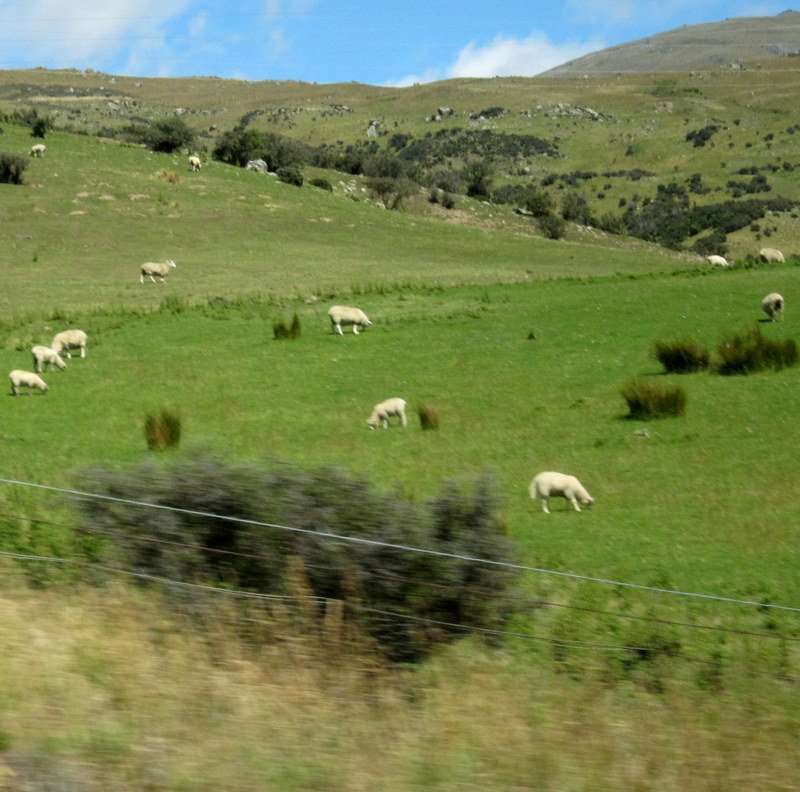 Wendy’s personal goal to travel to six of the seven continents (skipping Antarctica) was met when she and Rick touched down in Australia in January 2011.  For most of this trip, they traveled with one couple, driving for approximately one week on the south island of New Zealand, one week on the north island and a couple of days in Sydney.  Please visit the Australia webpages for the Walleighs adventures in Sydney and the central, eastern coast of Australia.

Despite January supposedly being the equivalent of July in the U.S., summer on New Zealand’s south island and the southern half of the north island was frequently rainy and not even warm most of the time.  However, the rain provided what

was needed for the country’s lush landscape (waterfalls!), hydro-electricity, crops and livestock.  Other than Auckland, Wellington and a few other cities, most of the countryside on both islands was populated by villages and small towns.

Common to both of New Zealand’s islands are sheep.  There are about three or four times as many sheep as the 4.2 million people in all of New Zealand. The Walleighs observed approximately one herd of cows for maybe three to four herds of sheep. For every three herds of cows, they saw one herd of goats, deer for venison meat, or horses.  In other words sheep were truly everywhere!

The two islands are tied together by the Inter-Island Ferry which travels across Cook Strait between the south—leaving from Picton Harbor–and Wellington on the north island.  The ferry ride is incredibly picturesque, with rugged coastlines and a harbor filled with small islands and working tugs.  Their ferry carried 100s of passengers (included a First Class Lounge with Wifi), many cars, and some commercial trucks.

Though Australia has become a globally recognized wine-growing area, New Zealand is gaining some visibility and respect.  The Walleighs detoured on the south island for a couple of hours along the Classic New Zealand Wine Trail, through lovely rolling country filled with many vineyards.  Unfortunately, most of the wineries were only open on weekends, so most wineries were closed when the Walleighs were there. The two that were open: Palliser and Vynfields focus mainly on white wines and one or two reds (pinot and merlot or merlot/cabernet blend). Rick and Wendy tasted a flight of wines at Vynfields’ garden behind a lovely renovated Victorian house tasting and entertainment facility.

Auckland is New Zealand’s largest city with a beautiful harbor busy with commerce and comprising about 1/3 of the total national population.  There was some old world architecture adjacent to modern buildings like the SkyCity complex and communication tower, the tallest structure in the southern hemisphere. From the observation deck near the top of the SkyCity Tower, there was a 360o view of Auckland from early in the morning to late evening.

Wellington (pop. 300 to 400,000) is New Zealand’s governmental and cultural capital with lots of Victorian-age buildings adjacent to modern ones like the new “Beehive” that houses Parliament.  The relatively new Te Papa National Museum of New Zealand along the harbor is one of the nicest and most innovative museums the Walleighs had ever visited.

Christchurch* (pop. 300 to 400,000) is NZ’s 3rd largest city. When Rick and Wendy visited in Jan. 2011, Christchurch was still recovering from the 7.1 earthquake in Sept. 2010 which had destroyed some buildings throughout the center and knocked down many homes’ chimneys.  Across from their Grand Chancellor hotel was a building’s rubble being cleared from earthquake damage.

Queenstown (pop. 25,000) is New Zealand’s Adventure Sport Capital.  Activities range from walks in the Botanical Garden and lawn bowling to skiing on top of The Remarkables mountain range across Wakatipu Lake from the city to bungee-jumping–supposedly invented here–and jet-boating.  Along with other tourists, the Walleighs rode the gondola to the mountain-top above the city to catch the glorious vista of Wakatipu Lake, the Remarkables, and the lovely layout of the city.

Dunedin, (doon-EE-din, pop. over 120,000), with its deep, protected harbor and beautiful extended coastline is called the “Edinburgh of the South”.  Founded by Scottish settlers, its name is derived from the Gaelic translation of its Scottish counterpart, with which it also shares street and suburb names (and rain). It once was the commercial center for the nearby gold-rush towns, which left imposing Gothic Revival architecture fashioned from volcanic bluestone and off-white limestone and grand villas that climb the hills around the town.  Now Dunedin is mainly appreciated for its surf beaches, flower-filled parks and gardens, and the 1871-established University of Otago–New Zealand’s oldest tertiary institution.

NOTE: Rotorua is described on the North Island page.

*On Mon., Feb.22, 2011 a shallow quake of 6.3 (in Sept. 2010 there was a 7.1) occurred right under downtown Christchurch, collapsing buildings, toppling a cathedral spire, and killing 185 people.  Seven weeks before, the Walleighs had stayed in the city center in the Grand Chancellor Hotel that buckled and partially collapsed. Six weeks before, they had ridden on Terminus Lake at Mt. Cook, into which the Tasman Glacier calved a 30 million metric ton iceberg, causing a one-time 10-foot wave.  5 weeks before, their 2nd Christchurch hotel was several blocks away from city center but near enough for them to walk by the cathedral whose spire had then toppled into the square where they had walked.  There but for the grace of God…