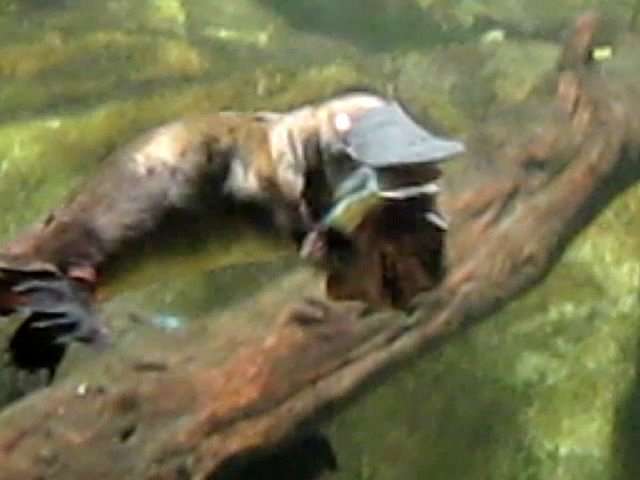 With isolation from connected continents over millennia, the region’s animals and plants adapted uniquely to their geography and climate and thus evolved distinctly differently from those on other continents.  The Silver Fern is not only New Zealand’s national symbol but also endemic to its forests and jungles. Australia has 600 different reptile species.  New Zealand has plants and reptiles from the time of dinosaurs.  Some of Australia’s plants, like the Cycads, have evolved over 250 million years.  And some animals are just like no others.

Duck-Billed Platypus(i) are not made-up from other animal parts:

Wendy and Rick visited her beloved duck-billed platypus* in both the Sydney Wildlife Park and the Reptile Park in Somersby on Australia’s central eastern coast.  The Reptile Park called their exhibit the “Platypusary,” a term combining platypus and

nursery, as in a place where platypus are nurtured. Platypi are in constant motion. For those who are unfamiliar with them, a platypus seems to be a transition animal between reptile and mammal. It lays eggs but bears its young alive.  When the first captured platypus reached Europe, scientists believed it was three different animals sewn together, which indeed is what it looks like: duck bill and webbed feet, beaver tail, and otter-like body.

Here’s a short video of one swimming:

*Seeing a Duck-Billed Platypus was one of Wendy’s childhood dreams. When Wendy was a little girl, her father had told her about the Duck-Billed Platypus.  But on their visit to the Bronx Zoo, they ran out of time to see the only one in captivity in the northeast U.S.  Years later, when Wendy and Rick visited the Bronx Zoo, the Platypus had long-since died.  So seeing them twice on the NZ-Australia trip put Wendy in 7th heaven!

Who knew that the South Pacific had so many kinds of penguins?

Penguin Place outside of Dunedin, NZ is a privately-owned preserve for one of the rarest species, the Yellow-Eyed Penguin.  As the Walleighs were walking with the biologist guide, about ten feet away from them was a baby trailing its mom.  The mother had just regurgitated whatever food the baby was going to get, but the baby was squawking-whining and almost pulling mom’s tail-feathers.  The baby finally gave up, giving the mom a moment of peace.  There also were grey, fuzzy yearlings just inches away in the preserve’s hidden blinds.  The preserve provided little wooden huts to protect the families, but penguins still had to fend for their own food off shore.  One of their several predators is the fur seal which Rick and Wendy observed waddling toward the waves to seek an incoming penguin for dinner.  Stoats were an introduced predator also favoring penguin dinners.  They came to New Zealand to limit the rabbit population but instead bred like rabbits and broke the balance in the natural life cycle of the island and especially the penguins.

In Australia at a couple of different zoos, the Walleighs observed other penguins.  The King Penguin is a similar subspecies to the Emperor (in Antarctica), which is the tallest and heaviest of all penguins. But the King is the second largest among penguins, weighing from 11 to 16 kilograms and standing about 90 centimeters tall from head to feet.  King Penguins tend to hang out in groups.

Along with one of the two largest penguin species, Rick and Wendy saw the smallest: Fairy Penguins.   They usually grow to an average of 33 cm tall.  Fairy or Little or Little Blue Penguins are found on the coastlines of southern Australia, New Zealand and possibly Chile.  This species tends to be loners.

Kiwis, CassOwaries, Kookaburras and friends of all sizes

Since Kiwis are so endangered, nocturnal, and hard to see in the wild, the Walleighs did go to a private indoor “preserve” to at least observe these flightless birds in darkened exhibits.  The only pictures Wendy had with KiwiS were standing next to a life-size, stuffed bird and with a statue!

Wendy was able to walk about 20 feet away from a couple of Emus wandering freely at the Reptile Park north of Sydney.  They can be nasty fighters and apparently so can their distant cousin, the Cassowary—seen at the zoo in Sydney–which is beautifully colorful but considered one of the world’s most dangerous birds.

The famous children’s song “Kookaburra Sits on the Old Gum Tree” is about the mostly good-natured kookaburra bird which stands 11 to 17 inches tall.  This bird is renowned for its unmistakable call, sounding uncannily like loud, echoing human laughter.  There are a few varieties such as the Laughing Kookaburra with a rather hysterical laugh and the Blue-Winged Kookaburra with a maniacal cackle.  Wendy is unsure about the varieties they heard but she only saw one or two Kookaburras on this trip.

The Walleighs were not able to see any of these animals in the wild—only at the new Zealand and Australian zoos they visited.  Who could resist anthropomorphizing kangaroos with their sweet faces and funny moves???  Their cousins, the Wombats, are nocturnal so their pens were lighted by infrared since they always seem to be sleeping when the zoos were open. The Wallaby is a smaller but just as cute kangaroo cousin.

The Tasmanian Devil is threatened with extinction by a virus which causes facial tumors that eventually block the mouth so they starve to death. The Reptile Park near Terrigal is breeding healthy Devils. Their babies have appealing faces and cute furry bodies but in watching the park ranger interact with them, it’s clear that they are very cranky-tempered critters.

Koalas are adorable but they are pretty boring since they sleep about 23 hours a day in very odd positions high up in gum tree (Eucalyptus) notches.  Even when awake, koalas mostly eat, poop, pee and repeat with some wandering in between. But they can growl loudly, bite, claw, and then walk away to their corners to sulk (yes, that’s Wendy’s projection!).

Australian and New Zealand possums are cute and furry but they remind Wendy of their CA cousins (technically opossums) who are nasty-looking and destructive to vegetable gardens.

Australia has the largest number of reptiles in the world–600 species.  Not all are attractive to humans, especially to Wendy, but there were some that were particularly cute.  These included: Monitor Lizard, Green Frilled Lizard, Pygmy Monitor, Jabba the Hut Frog (OK, her interpretation only), a Crowned Chameleon, and a Spotted Skink.

There are very unusual sea creatures around Austraia. The Dugong is a cousin of the Manatee (in Florida’s warm waters).  It is thought to be the mythical “Siren” which tempted sailors to jump into the ocean. Hmmmm maybe the sailors were at sea too long…

One of the most unusual creatures Rick and Wendy had ever seen was the Wobeggong at the Sydney Aquarium. There is a unique feature of this cousin to the shark family: vestigial legs that cling to its belly as though its landing gear is up! So like the Platypus, it might also be a transition species that originally lived on land.

Australia’s saltwater crocodiles start out very small as hatchlings, can be up to three feet long as a yearling and are huge as adults.  In fact at the Reptile Park’s feeding demonstration, Wendy had to photograph one in three parts to get him all.  You don’t want to hang out on an Australian deserted beach without being very careful.