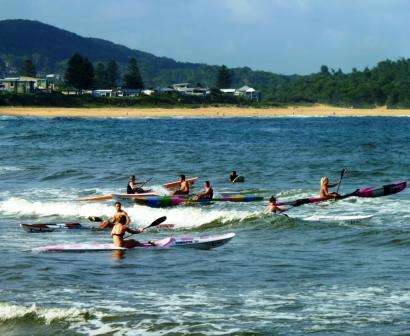 The Walleighs’ experience north of Sydney with their “local” friends was different from other parts of their trip.  What they saw near their friends’ home in Terrigal were glorious beaches, surf, rocky coastline, and some additional unique animals in Reptile Park. Most days were spent lying on the beach, in the ocean, walking on the beach, or riding by the ocean. They also tasted Australian wines in Hunter Valley, watched the daily pelican feeding at a town called The Entrance, and celebrated Australia Day (equivalent to U.S. 4th of July).

Though most “modern” lifeguards use jet-skis and motor boats for rescues, competitions with the old man-powered rowboats still occurs in many Australian beach clubs. Near the end of most beach days, the life guards practice their rescue skills. And the women get to enjoy this as a spectator sport: watching young, well-built lads wear their local beach club’s “Budgie

Smugglers” dragging their boats out into the waves. “Budgie Smugglers” are skimpy swim trunks that are hiked up over the men’s “lower cheeks” for better traction on the benches of the rescue boats. This scrunching creates a frontal look as though the lads are smuggling a “Budgie” bird in there…think about it.

Some of the beautiful coastline around Terrigal was smooth golden sand and some was rocky shelves. Around Terrigal were many towns with fun-to-say Aboriginal names like Woy Woy and Tumbi Umbi. Though each day’s beach location might have been different, the activities were virtually the same: swim, read, surf, hang out (repeat, repeat) with a beer and barbecue in the late afternoon to offset the very difficult days. Sometimes a bush walk was thrown in and one day, a train trip into Sydney for the day (see Sydney page).

Beside typical tide pools, there were some unusual natural sites along the central coast shoreline including: a miniature forest of squishy plant-balls formed by the tides; a collage of webbed rock on top of a rock wall; a rock-shelf surface resembling elephant skin; weird rust-colored seams in rock walls; and a small shark caught by a local fisherman which was alternately lying still then flopping around.

What is now a tourist attraction at a sleepy coastal town named The Entrance (a river flows into the sea here), started as a butcher noticing that pelicans would come to his shop’s garbage bins most days to raid for fish heads and other tasty morsels that he would throw away. Over time, this became a daily visit and the local townspeople realized that watching these huge birds being fed could attract tourists and provide revenues. One could argue that the pelicans were becoming domesticated, but the few fish they received each day would not be enough to feed them fully so they still would have to seek much more food.  In any case, now these huge pelicans gather every day at the same time for a volunteer to toss them mullets for a meal. Though it seems initially like chaos, pelicans focus precisely on their potential food treat. And when one takes off, boy does it have a huge wingspan. Simultaneous with the feeding, the town biologist also takes the opportunity to ensure all the birds are healthy, with no hooks or injuries. Thus, the town, pelicans and tourists all benefit.  See a video of these huge birds being fed:

About two hours from Terrigal in the picturesque Wollombie wine-growing region up to 100 wineries are located in Hunter Valley. As typical of touring Napa Valley for the day, the Walleighs and friends visited several tasting rooms. Swish Winery, Tempus Two (the lunch stop), Tyrrells and Audrey Wilkinson winery were the nicest.  This day also included a bit of time in the vineyards to view different varietals of grapes on the vine. Wilkinson had old photos, equipment and history of their wine-making from the mid-1800s. Another winery, where the gang did no tasting, was notable mainly for a general store replicated as it would have been in the pioneering days of the late 1800s.  Apparently, the winery owner had for years collected signs, bottles, food cans, equipment, clothing and pictures typically displayed in a store at that time.

The last stop in Hunter Valley was the town of Kurri Kurri, with a hotel and pub bearing the town’s name.  The town had a large statue of Australia’s national bird, the Kookaburra, created by a local sculptor. But primarily Kurri Kurri is renowned for local artists’ many Trompe L’Oeil paintings on buildings’ walls. Some Trompe L’Oeil paintings included an old miner in front of a store; a memorial to the ANZAC (Australia and New Zealand) participation in the “Great War”, World War I; and an old military band marching across a very long wall. Even the public toilet facility was painted on all four sides with  typical local scenes!

January 26 is Australia Day, which is mainly an excuse to barbecue, drink beer, wear and wave flags and have fun. The Walleighs’ friends took them to a typical small town celebration with many flag-bearing party boats; street fair booths selling flag souvenirs; people covered in flag-clothing (including two women wearing flag shorts who should not have). The activity most different from 4th of July was a log cutting contest pitting experienced lumber-jacks against young ones. A young man won and no one lost a limb.

Red Gum Trail was one of several “tramps in the bush” that also included Aboriginal-named trails like Burrawang and Lilli Pilli Loop. The Walleighs’ hosts led the hike through red-colored gum–aka eucalyptus–trees much different from those in Calif.  One somehow grew so contorted that it resembled a large, scary tree snake. There were mature seed pods from tall shrubs that when open, looked like many mouths. Also along the trail were Australian Cycad plants, descendants from plants found 200 million years ago, characterized by spiky palm-like leaves and a pineapple-like but inedible fruit. These were just some of the attributes that made tramping in Australia so different.

On one of the few overcast/rainy days, the group took a small cruise ship on Broken Bay, which is a confluence of Brisbane Waters, Pittwater, Hawkesbury River and Tasman Sea/Pacific Ocean.  About 85% of the passengers were official pensioners (actually receive Australian pensions).  The ship passed by oyster beds, nice homes along the shore, and typical weekend boats as well as the Rip Bridge, named for the dangerous rip tides caused by all the bodies of water merging there.