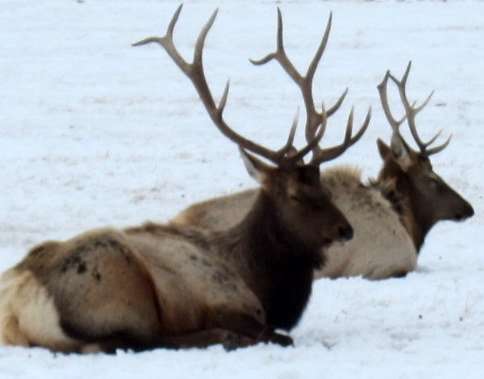 In January 2013, Rick and Wendy flew to Jackson, WY to spend a week with their son Adrian and his girlfriend Kallie.  While there, Wendy and Kallie visited the National Elk Refuge via sleigh.  It is truly amazing how:  large the elk are, close the sleigh got to the herd, and the herd behaves.  The very knowledgeable guide provided some interesting facts.  For instance, males and females hang out together in the mornings—presumably to feed and maybe check each other out as potential mates—then split up in the afternoons by gender.  Also, every year, elks grow their horns aka racks but come spring, slough them off and start growing them again.  The subsequent year’s rack is larger with more “points” than the previous year, but if there was a bend or twist or defect (e.g., only one full and one partial horn), the rack will follow the same pattern in future years.  The guide pointed

out several elk whose racks were distorted as in prior years, just larger.  Despite the cold, the provided blankets kept all the passengers warm enough to thoroughly enjoy the hour-long sleigh ride.   It is well worth taking a break from skiing to visit the National Elk Refuge because during the spring through autumn, the herds move too far away from the town for visitors to be able to enjoy their impressive presence.  As a special bonus, Rick, Wendy, Adrian and Kallie spotted a young moose in the parking lot near the condo in which they stayed.  The pictures were dark because it was twilight, but the memory…

For a week at the end of February 2013, Rick and Wendy met their daughter Diana and fiancé Bryan along with several of their friends near Bozeman, Montana.  During their stay, about three to six inches of snow fell several days, so the skiing conditions were wonderful.  Because Big Sky consists of two large resorts connected by several lifts and can be skied together or separately, this area is the biggest in North America with a wide range of double black diamond, single black diamond and blue cruiser trails–something for everyone.   The variety of shops and restaurants was somewhat limited and definitely spread out over almost fifteen miles, but the restaurants the group visited were very good.  And the views were spectacular, as can be seen from the photos.