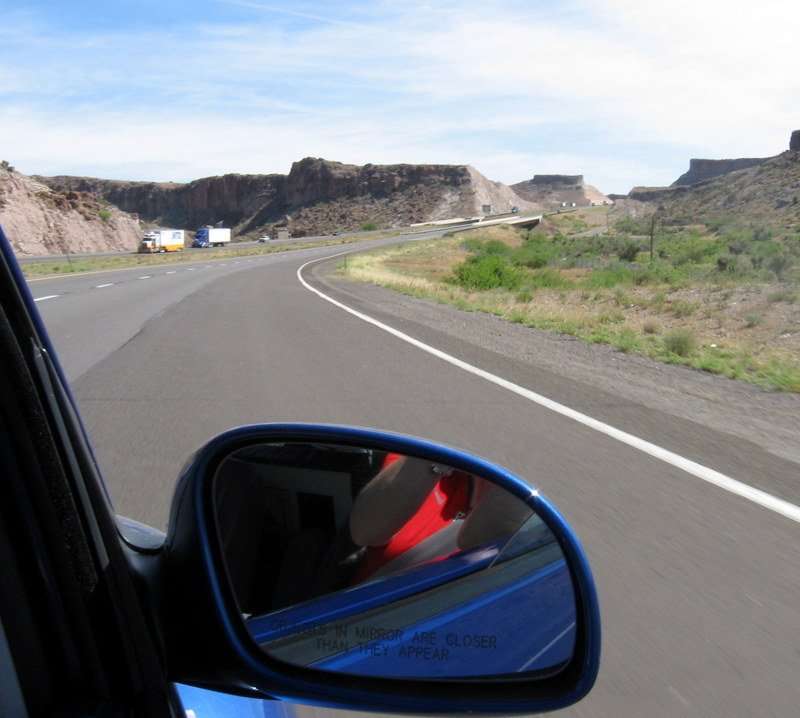 Starting May 31, 2008 in Los Altos, Calif. and ending almost 4,000 miles later on June 10, 2008 in Greenville, North Carolina, Wendy and Garner ventured across the southern U.S. to deliver Wendy’s 2002 VW Beetle to Diana (so she could drive to/from her new pediatric residency starting in late June).  Garner and Wendy shared lots of laughs, a minor mishap (no air conditioning for 3 days in 100o 100% humidity in the South), many fun tourist stops, a couple of books on tape, the endless state of Texas, and marginal to great food and hotels.  Despite the never-ending vastness they felt driving across Texas they managed to stay only one night, pushing through one of the two days for 13 hours.

There are photos here from Calif. through their first two tourist stops in Grand Canyon, AZ then Albuquerque and Santa Fe, NM.  Needless to say they didn’t take time to stop for any pictures in Texas.  So pictures start again in New Orleans, Louisiana, go on to Savannah, GA, Charleston, SC, and finally at Diana’s new house in Greenville, NC. This was a wonderful 10-day road trip across the southern U.S. with many fabulous memories!

The mighty “Bluebird” paused for a breather–and Wendy/Garner for a pit stop–early in the near California’s  Mojave Desert, which is dramatic, rugged, arid, and yes, quite hot. They drove on the famous old Route 66 throughout the trip, but in many places, they were on newer highways that only paralleled Route 66. They arrived at a Best Western motel in Kingman, AZ in time for a lovely dinner at the Brunswick Hotel’s renovated dining room.  Kingman’s claims to fame: birthplace of Andy Devine (old actor) and a key railroad stop.

They arrived at the South Rim of the Grand Canyon (1st time for both of them though Wendy had been to the north rim twice). After a quick lunch, they took a 3-hour geological tour in a van, which turned out to be just the two of them plus a young,  knowledgeable and enthusiastic guide. At every stop, the canyon’s colors and shadows changed and amazed them.  It was hard to gain perspective just looking over the canyon rim.  They spotted a California condor, which looked like a dark spot—despite its 9-foot wingspan–in the brush down the canyon wall.  They enjoy the sunset during dinner at the famous El Tovar Inn, originally built by Harvey Hotels in 1905.

DAY 3: Albuquerque in the “Land of Enchantments”

Garner and Wendy took a helicopter ride over the Grand Canyon (1st ride for both), where they were lucky enough to sit up front. The view as they approached the lip then flew into space was absolutely breathtaking, spectacular, astounding, etc.!  After the helicopter landed they drove to Grandview Point, which in 1898 was also a popular tourist spot including hotel. Their last  Grand Canyon stop was Desert View Watchtower, designed by pioneering female architect, Mary Jane Colter.  As the railroads expanded, Fred Harvey commissioned her on 21 hotel projects all over the western U.S., each of which was designed and built with materials that complemented each landscape.

They headed from AZ to NM, “Land of Enchantments,” and lots of desert, plateaus, and trains.  In the early evening, they arrived at Garner’s sister-in-law’s in Albuquerque where they stayed for 2 whole nights!

They drove for the day to Santa Fe by way of Bandolier National Monument which is one set of ruins with cave dwellings where the Anasazi Indians lived from before 700 B.C.E. until sometime from 1300 to 1600 A.D. The Anasazi dwindled then disappeared from history.  The most famous Anasazi area is Mesa Verde at the “four corners” where AZ, NM, UT and CO meet.  At Bandolier, some indigenous homes were built in front of the cliffs and some were expanded caves in the cliff-faces. The Anasazi carved hieroglyphics into the rocks which probably had special religious or community significance but appeared now like encrypted messages. It is unclear whether the Anasazi also enhanced water erosion to create other fascinating rock formations. To help their recovery from the Bandolier Monument’s searing desert heat, they reached Santa Fe in time for lunch in a picturesque, adobe-style hotel.  After shopping a bit in the cute town and briefly visiting the Georgia O’Keefe Museum, they headed back for a family dinner in Albuquerque.

Wendy and Garner stayed on Royal St. in New Orlean’s French Quarter which fortunately looked the same as always (higher ground so unaffected by Katrina), filled with colorful local characters; tourists who walked around with alcohol-filled “to go” cups; and jazz bands and street musicians playing all day and night.  Of course they stopped for a Cafe Americaino and beignet at the French Market, preserved by Major “Dutch” Morial (there was a plaque dedicated to him).  Unfortunately, not all of New Orleans fared so well.  In the Lower 9th Ward at the time of their visit, there were a few restored homes with people residing there; some partially recovered houses; and surrounding those houses were many still-condemned homes. Very sad and, according to locals, totally unnecessary because the Army Corps of Engineers had originally failed to build the seawalls correctly which upon collapse, precipitated the levees’ failure.

That damned Yankee, General Sherman, did destroy much of Savannah, but much gentility survived including lots of old architecture and the tradition of houses built around squares.  Wendy and Garner’s hotel, the Plantation Inn, was converted from a post-civil war business building, across a square dedicated to John Wesley (religious figure) and near Chippewa Square and a park with a huge fountain.  They took a long walk around many of these squares and were surprised to find a stone memorial to Savannah’s first Jewish cemetery which had been approved by religiously-tolerant James Oglethorpe, founder of the colony/state of Georgia. Due to post-civil war rebuilding, Savannah’s architecture ranges widely from colonial to Victorian, including hints of French in its iron-worked balconies, window, and fences.  And garish Victorian homes neighbored with Federal-style row houses. One interesting architectural note was the round iron plate attached to the front or side of many buildings, which apparently enabled an iron beam to be inserted and/or adjusted underneath the main floor to straighten a house when it had settled at too much of a tilt.

Their last city tour was on a mule-drawn carriage in Charleston. They were told that mules are stronger than horses so clearly deserve better care. Their tour took them down a cute shopping street with a store named for Wendy’s daughter Diana (NOT).  They passed many historical sites such as a pre-Revolutionary War powder magazine and other historic pre-Civil War buildings.

The “shotgun” house style is very popular because in the “old days” taxes were based on house width facing the street, thus often a house was situated sideways on a plot of land with just one room and door fronting the road.  The term “shotgun” derived from the fact that if you opened both the back and front doors, you could shoot straight through the home.  Houses along the Atlantic Ocean were often as impressive as the views.  The rooftop of their hotel, the Market Pavilion, overlooked the ocean, modern bridges, and shops, as well as the early 1800’s Exchange Building–quite spectacular!


Wendy and Garner ended their road trip at Wendy daughter Diana’s newly purchased townhouse in Greenville, NC where she was doing her pediatric residency.  What a totally delightful journey from start to finish!!!