Rick’s Heli-Skiing in Alaska: Once in a Lifetime! 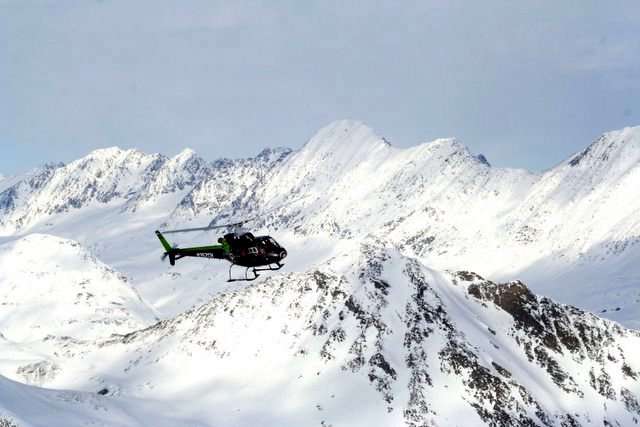 In March 2006, Rick’s friends, the Burwens, persuaded him to join them Heli-Skiing in the Chugach Range near Valdez Alaska.  In essence, instead of taking a chairlift or tram to the top of a mountain to find fresh powder, 6 or 7 times per day he rode in a helicopter, which often landed on a flat space about the size of a table on the pointy top of a mountain.  Then he carefully grabbed his skis; disembarked while crouching so that the helicopter blade wouldn’t kill him; and followed a guide into unbroken snow for miles down incredibly steep terrain.  He had to be trained in deep snow and avalanche rescue; wear an Avalung so he could survive for 30 minutes buried in an avalanche; carry a shovel to dig friends out of snow; and wear a transmitter/transponder to alert his fellow skiers in the event of falling into a crevasse or under an avalanche.  And for this he paid a lot of money.

Just getting to the Alaska Rendevous Guide’s Lodge took multiple flight legs and then first couple of days were too “socked in” for the helicopter to fly.  But Rick thought he got in plenty of skiing!  Please vicariously enjoy his only attempt at Heli-Skiing and Extreme Sports.