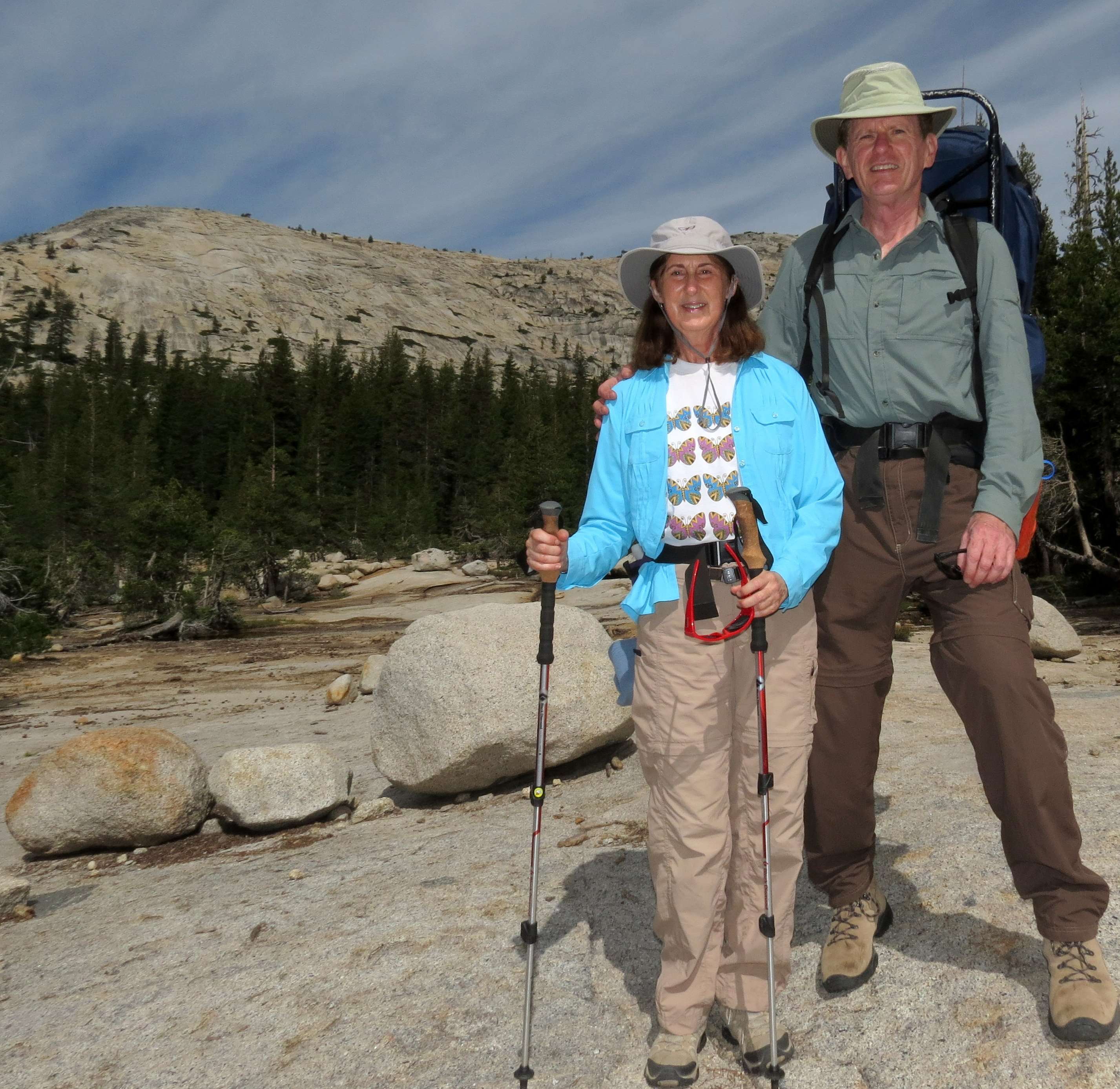 After many years of attempts by Rick’s backpacking buddy and his wife to persuade her to backpack, Wendy finally agreed to a compromise: hiking to one of Yosemite’s High Sierra camps where breakfast and dinner were included in the price and box lunches were available. They stayed for two nights in a tent cabin (in beds, not on the ground) with a shared bathroom nearby (not digging a hole in the woods). So no tents, sleeping bags, sleeping pads, and food were needed—just toiletries, water for the first day, light shoes for walking around the campsite, and change(s) of clothes. Rick agreed to carry most of the

clothing and toiletries so that Wendy just carried a large fanny pack with water, sun screen, and bug repellant, etc. plus hiking poles. No “smelly” products were allowed in the cabins due to Yosemite high country being bear territory, so almost all toiletries had to be placed in “bear-proof” lockers each night.

Day 1’s hike started at Tuolumne Meadows (8,775 ft. elevation) after a night with the four of us in a tent cabin. Over the course of the 1st day’s 8-mile hike to Glen Aulin camp (7,800 ft. elevation), there were ups and downs of a few hundred feet elevation passing through rugged grey granite terrain, lovely lakes, small falls and streams, and generally gorgeous scenery. After a heart, tasty dinner, we were all in bed by 9pm. There was a still-full waterfall adjacent to the camp which “played” white noise all night.

Day 2, after a filling breakfast, the four of us set out on a “short” hike toward Waterwheel Falls. After about 6 or 7 miles of ups and downs along the trail, Wendy decided to stop so she’d have enough energy to hike another 7 or 8 miles the next day to head back to Tuolumne.  We saw one smaller falls, not Waterwheel, but that was okay with the group.  After another hearty dinner, bedtime was even earlier.

Day 3 required us to set out immediately after an early breakfast in order to reach Tuolumne Meadows in time for Rick and Wendy to drive back home at a reasonable hour because of an early flight to Boston the next morning. We took a different trail back to Tuolumne Meadows which emerged at a different trailhead than where we had started but where we had parked one of our two cars.

The the company was good, the scenery was gorgeous, and the hike was moderately difficult but not strenuous.  However, there is about a zero% chance of Wendy repeating the experience, preferring to let Rick have his manly backpacking trips with just his friends.