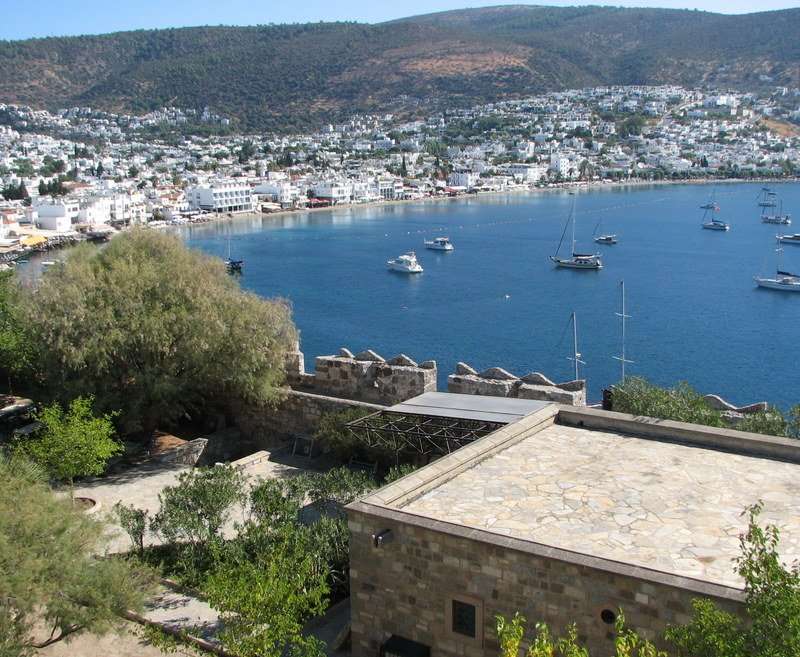 The lovely blue and turquoise colored water in its harbor, along the Mediterranean, and to the east, is part of why Bodrum is considered the start of Turkey’s Riviera.  It is where the very rich and well-to-do pretending to be rich like to play. The classes of tourists are separated by their toys–yachts of all sizes.  But everyone enjoys the southern beaches and ports along the Turquoise Coast.  In addition to today’s boats and bikinis, there are remnants of history integrating Romans and more recently, Venetians, in many of the coastal towns.  The Venetian-style Bodrum Castle from the 1600s C.E. was interesting to explore, with a steep climb to its turrets with the reward of a glorious view.

Rick and Wendy decided to drive (a long, one-day round trip) along the Turquoise coast to the town of Fethiye. On the way, they drove through rocky canyons and mountains, as well as past towns with

In Fethiye, the Walleighs walked along the harbor promenade observing the many boats docked in their slips, including multi-masted sailing yachts called Gulets, which are apparently unique to Turkey. Along with beautiful water views, Fethiye featured some Roman tombs. As they drove back to Bodrum, they glimpsed the Turquoise Coast highlighted in a lovely sunset.

The trip along Turkey’s western coast included several stops between Bodrum and Seljuk, where Rick and Wendy stayed their last two nights in Turkey.  One stop was in Didyama, which had been founded between 2000 and 1000 B.C.E., to briefly tour a Temple of Apollo. A model of the original Temple of Apollo in Didyama showed it being magnificent but never-quite-completed.  It was first built before 500 B.C.E., destroyed during an invasion, and then reconstructed through the early Roman period.  Today the site is definitely quite incomplete—mainly fallen into ruins.  There was a column graveyard displaying how detailed the pedestals were.  One face carving is famously pictured in many tourist photos and another is a fierce but partial lion.