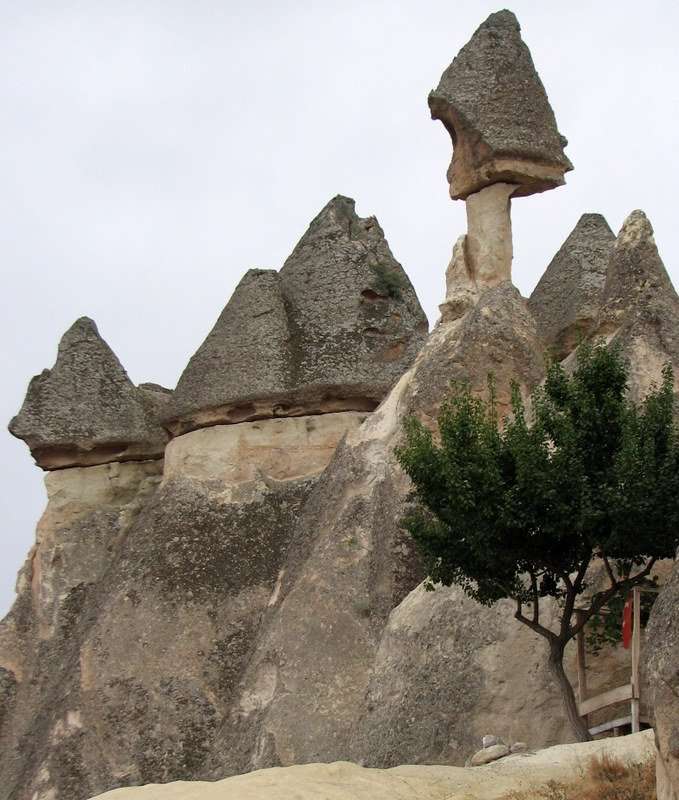 However it is spelled, Kapadokya (or Capadoccia or…) in the middle of Turkey is a whimsical landscape that has shaped and been shaped by local culture and the region’s various religions.  Many layers of volcanic ash have been compressed into Tufa rock then eroded to form what are called Fairy Chimneys above the ground. The Tufa has also been carved to create churches, monasteries, houses, and storage both below ground and above.

Within the Kapadokya area are several towns.  Rick and Wendy stayed in the hillside town of Urgup which incorporated modern homes alongside the old cave houses. Their hotel, Serinn House, similarly consisted of cave rooms and “built-out” rooms.  Each morning’s delicious breakfast was served overlooking a lovely valley and surrounding hills.

On their first afternoon, the Walleighs visited a few sites typical of the area. Keslik Monastery was carved from the natural Tufa rock in about 1000 C.E. to create living and religious quarters for Greek Orthodox monks and seminary students who wanted to live in quiet contemplation.  Their guide or “Host Man” at Keslik was Cabir who lived in a comfy cave and was the third generation in his family to be in charge of the monastery grounds and small olive orchard. He guided them through several cave rooms and buildings including a small church.

Rick and Wendy stopped for lunch at The Old Greek House Restaurant where they watched stuffed grape leaves or dolmas actually being made by local women.  Apparently Greek people used to own this house before the Turks booted out all the Greeks after World War 1. At that time, the Ottoman Empire had totally collapsed, which many years later led to the founding of the Republic of Turkey.  After lunch the Walleighs did a little shopping where there was a tree hung with tens of blue glass ornaments created to protect people from “the evil eye”.  But they didn’t purchase the “bioviagra” also offered by a nearby vendor.

Pasabag was the largest preserve of Fairy Chimneys that Rick and Wendy visited.  These whimsical Tufa formations consisted of layers of rock with different density and colored volcanic ash, which eroded at different rates by wind and water. The top layers were also darkened by lichen due to their high exposure to the elements.  In a sense the Fairy Chimneys are alive because they are in constant flux, with both old ones wearing down and new chimneys starting to form for the future.

Lots of stops at old, rock-carved churches, formations, and villages

As they were driven into the valley to visit Sobessos and Soglani, the Walleighs visited more buildings carved into the Tufa Rock, more churches and frescoes as well as old burial crypts from about 900 to 1100 C.E.  In one section of Sobessos, a building was being excavated to expose the old foundation and mosaic floors.

At the Goreme Open Air Museum were more carved-out rock churches and frescoes deriving from 500 to over 1000 years ago.  From the “castle” rock formation at Uchisar, they viewed new and old Tufa-constructed and “standard” houses.

Pigeon Valley was used and maintained by local farmers to encourage pigeons to live in these caves.  Farmers would periodically harvest the birds’ very acidic guano to fertilize local crops.

Zelve was one of several “Troglodyte” or underground villages in the region. To protect themselves from the frequent invaders, small farming villages would carve the nearby Tufa rock caves into complete facilities with meeting and dining rooms, sleeping rooms, and well-ventilated air shafts where they could live for a few weeks until the invaders left. For even greater security, there was a stone door that could be opened and shut only from inside as well as short, narrow hallways that would force any invaders to walk bent and single file—all the better for the residents to easily attack.

Hittite-style and Iznik ceramics in Avanos

The city of Avanos is on a river with banks of red clay that has been used since 1500 to 1100 B.C.E., starting with the Hittites  who were known for very finely detailed red ceramics.  This style is reproduced today in Avanos and elsewhere in Turkey.  The Guray Seramiks Factory which Rick and Wendy visited is renowned for its hand-thrown, designed, painted, and fired pottery created in both the traditional Hittite style and the Iznik process.  Iznik ceramics are made from 75% quartz to create very strong pieces that can produce bright colors and accept very hot glazes.  Wendy fell in love with Iznik ceramics, especially after watching one of Guray’s artisans nicknamed “Crazy Man,” so she bought one of his plates.  Supposedly Martha Stewart had purchased one of Guray’s large platters…