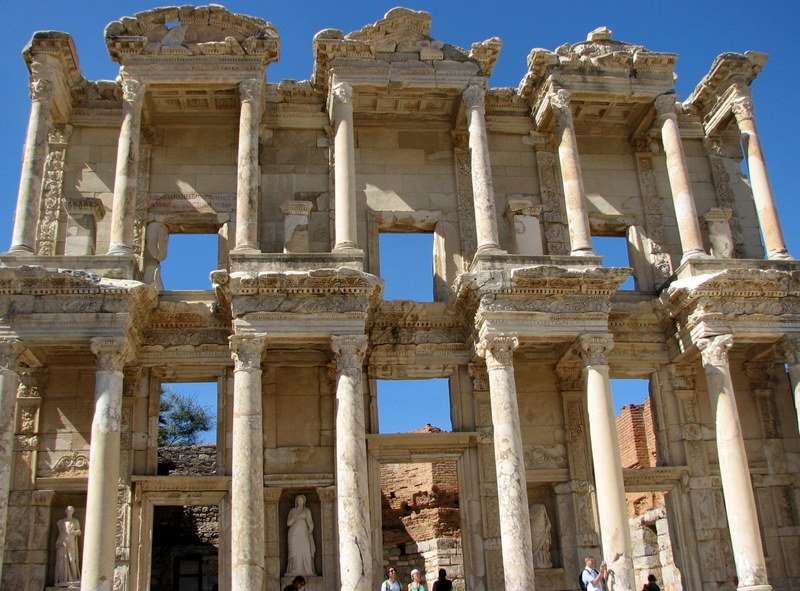 The Walleighs’ drive up the coast from Bodrum ended in Seljuk, which is near Izmir the ancient ruined city of Ephesus as well as the major cruise ship port of Kusadasi.  In fact after two days in Seljuk, it was in Kusadasi that they embarked to on a three-day Greek island cruise.  There was a funny story associated with their arrival in Seljuk.  There had no clear directions to the Bella hotel where they were staying, so they drove around and around the city.  As Rick got out of the car to go into a store where hopefully someone spoke English, he stopped to ask a man on the sidewalk.  Ironically, this man was brother-in-law to the owner of the Bella Hotel.  He called his brother-in-law who sent a car for us to follow to the Bella Hotel. What were the odds???

Shortly after Rick and Wendy started their tour of Ephesus, about 6,000 passengers from three cruise ships descended on the city. During that time, the Walleighs’ guide lectured them on the history of Ephesus and guided them to the less traveled

areas in the Ephesus ruins. The crowds eventually flowed back to their ships, so the most popular ruins could be viewed more quietly.  The whole complex and its surrounds were amazing.  In its heyday in the 1st – 4th centuries C.E., the city was populated by 250,000 citizens plus three times as many slaves. One of its amphitheaters could entertain thousands of people at a time, with a stage and orchestra pit.

By far the most impressive structure in Ephesus was the library, which must have been truly awe-inspiring during the city’s peak. And the smaller temples, houses, amphitheaters, statuary, and monuments were still pretty amazing.  Also amazing was the fact that there was an underground tunnel connecting the library to the brothel across the street, which enabled husbands to appear studious to their wives while actually enjoying themselves in a far different way.

For Wendy, as impressive as the large structures were, she loved the smaller elements throughout the complex such as dual-columned, mosaic-paved roads; and ceramic pipes that carried water throughout the city.  The group toilets were notable for two reasons: slaves were sent ahead of time to warm the stone seats so that these upper class men wouldn’t suffer discomfort; and there were no privacy curtains so that the men could chat or do business while “doing their business.”  Recently excavated by a joint Europe and Turkey partnership were a row of elaborate terrace houses. Clearly, very rich families occupied each house with interior marble columns and archways, large mosaic floors, and elaborately frescoed walls.

Relics and ruins in Seljuk also

Seljuk’s Archeological Museum displayed lots of relics as well, such as a many-breasted fertility goddess, multiple Stele, and ancient medical tools.  The chapel and burial crypt of St. John the Apostle was interesting. One major column and a few statues were all that remained at the Temple of Artemis aka Diana the Huntress, considered one of the Seven Wonders of the Ancient World.

At lunch, the Walleighs watched local ladies and teenagers mix, flatten, roll and cook over a wood fire one of Turkey’s old special foods: Gozelme aka Turkish crepes.  These were deliciously stuffed with a variety of meats and vegetable (hmm…early versions of wraps???).