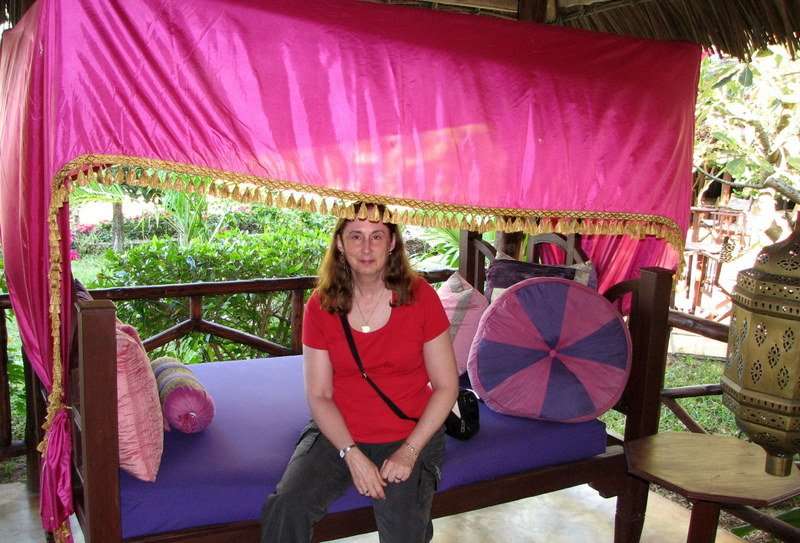 Just saying Zanzibar sounds exotic. Didn’t Crosby and Hope take the Road to Zanzibar?  Now part of Tanzania (formerly two countries: Tanganyika and Zanzibar), this island has become a honeymoon destination for many Europeans and well-to-do Africans.  Still known for its spices, beaches, and being formerly the main exit for the East African slave-trade, in the 1970s and 1980s Zanzibar also became famous as the birthplace of Freddie Mercury*, lead singer of the band Queen.

Rick and Wendy had a wonderful few days there. Their hotel reflected the Kiswahili culture along East Africa’s coast and

islands, combining Arab and African flavors. The hotel exterior was constructed of typical African wood, thatched roofs and sun-washed colors blended with surroundings, but the interior decor was definitely Arabic.  And the sand on the breath-taking beach looked as though it was flavored with the vanilla that grows on the island and felt like talcum powder.

Speaking of island flavors, one of their Spice Tour guides climbed a 50-foot palm to give them the most delicious coconut they ever tasted.  Another guide wove palm-frond hats, a necktie for Rick, frog necklace for Wendy and satchels for them to carry the spices theytasted.

Zanzibar Town’s oldest section is Stonetown where about 300,000 people live–almost one-third of Zanzibar.  Sadly, this island was the center for all East African slave trade, mostly bound for southern Africa, India and the Middle East until the mid-1800s when the Sultan of Zanzibar banned slave trading.  The Anglican Cathedral was built on the site of the old slave market but its compound includes some reminders of the practice such as chains where slaves were tied for auction and small chambers where hundreds of slaves were literally packed to test their stamina.  Cars and tourists walk by the centuries-old Arab fort and the Sultan’s Palace from the 1800s that was being converted to a museum.

*According to Wikipedia, Freddie Mercury was born Farrokh Bulsara on 5 September 1946 in Zanzibar and grew up there and in India until his mid-teens. He was a British musician, singer and songwriter, best known as the lead vocalist and lyricist of the rock band Queen. He has been referred to as “Britain’s first Asian rock star.  As a performer, he was known for his flamboyant stage persona and powerful vocals over a four-octave range.[4][5][6] As a songwriter, Mercury composed many hits for Queen, including “Bohemian Rhapsody“, “Killer Queen“, “Somebody to Love“, “Don’t Stop Me Now“, “Crazy Little Thing Called Love” and “We Are the Champions“. In addition to his work with Queen, he led a solo career, and also occasionally served as a producer and guest musician (piano or vocals) for other artists. He died of bronchopneumonia brought on by AIDS on 24 November 1991, only one day after publicly acknowledging he had the disease.