Zambia and Zimbabwe on the Zambezi: Both Side of Victoria Falls 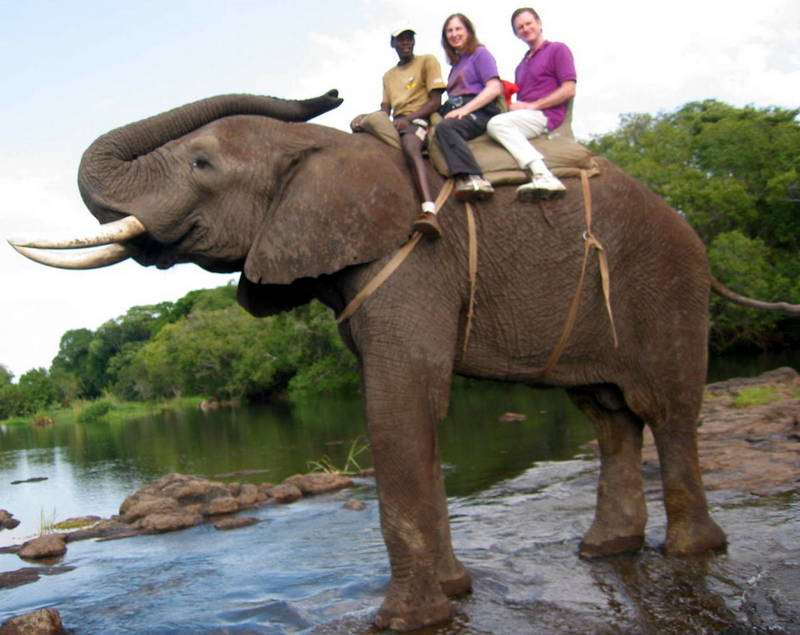 At the end of their stay in Swaziland, Rick and Wendy’s adventurous, long-time friend Carolyn came to visit.  While they completed their final project work in the office, Carolyn visited Kruger Game Park, staying in the beautiful, safe, private compound at Nottens Bush Camp (where they had stayed with their son a couple of months prior).

Victoria Falls is a Gorge of Cascades and Flumes

Then Rick, Wendy and Carolyn flew to Johannesburg for one night then onto Livingstone, Zambia where they would view Victoria Falls, cruise at sunset on the Zambezi River, and take a brief elephant safari.  On our drive to our hotel, we stopped to commune with the statue of Dr. Livingstone, for whom the city was named.  They  dropped their  luggage in their rooms then the three walked the 10 minutes to the Zambia side of Victoria Falls, which cut a deep gorge out of the Zambezi River separating

Zambia and Zimbabwe, formerly Northern and Southern Rhodesia.  It was spectacular as you can see below.  After watching rainbows and mist everywhere, they walked back to the hotel and arranged for a sunset Zambezi cruise.

Bright and very early the next morning after seeing elephants in the water, they were able to ride on some of their cousins, the original “land rovers” among the African Big Five.  These elephants had been orphaned or abandoned then rescued by the owners of the preserve.   They get to keep their tusks, are protected from poachers, and don’t have to continually forage for the hundreds of pounds of food they must intake daily.  Carolyn was mounted on her charger with the handler, with a baby elephant tagging along being trained for riding in a few years.  The highlight of the elephant safari was crossing a river that was 10 or 12 feet deep. A guide took pictures as the handler began to drive each elephant into the water.  If Rick and Wendy hadn’t been instructed to put their feet on the top of the elephant’s back, their legs would have been soaked!  At the end of the safari, they got to cuddle with their elephant .

Viewing Vic Falls from Zimbabwe Side Even More Spectacular