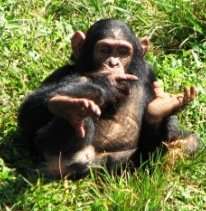 With their son, daughter and friends the Hubers, Wendy and Rick took a 1.5 hour boat ride on Lake Victoria from near Entebbe to reach Ngamba Island Chimp Sanctuary.  Almost as soon as their luggage hit the tent floor*, they were off to view chimps from the platforms that were the public part of the facility. Since all the chimps are orphans rescued from the Pet Trade or abandonment, with no parent-child role models, it was unusual that one baby was actually adopted by a female chimp but we did observe this. Near sunset, the adolescent and adult chimps who are still out in the forest—playing and being normal chimps–come back to the facility expecting snacks and fresh straw in their hammocks where they sleep

As long as ALL the chimps come back to their sleeping quarters, then Ngamba overnight guests could prepare for the main reason they were there: taking pre-adolescent chimps on a forest walk. Rick, Wendy, Diana and Adrian walked at sunset and

the Hubers walked the next sunrise.  Each little chimp held hands with a handler to start walking into the forest while the Walleighs—in green coveralls matching the handlers—marched behind.  Within the first five minutes, one chimp named Billy turned to look back at us, ran to Wendy and jumped into her arms, clinging tightly to her.  What a thrill!  Unfortunately Billy was almost 40kg—over 80 pounds—so though Wendy did her best, even switching him to her back, she couldn’t walk too far bent nearly double to bear his weight.  The handler took Billy to walk ahead.  Meanwhile the smallest chimp jumped onto the 6 ft. 3 inch Rick and others held Adrian and Diana’s hands. Once into a forest clearing, everyone sat.  Another chimp approached Wendy to be groomed as did most of the others with the rest of the family. Chimp hair and hands/feet are quite soft.  Grooming was actually fun. Wendy’s chimp made faces and gestures that communicated its desires. Then at one point a large noise scared her chimp who jumped into her lap and threw its arms around her, trembling.  A moment never to be forgotten!  If there were any doubts that chimpanzees share over 98% of human genes, this trip to Ngamba Island Chimp Sanctuary put them to rest.  Chimps use tools, entertain themselves and their audience, make funny noises and faces, love being carried when they are little, and want to be consoled when they are hurt. Everyone needs a warm touch.  They are also clever, aggressive, omnivorous, and opportunistic. Sound familiar?

*The tent-cabins were comfy for the two nights, though our shower-times did need to be pre-arranged so that solar-heated hot water could be hand-carried and dumped into a sack.  Three people had to use an outdoor shower while the rest could use ones attached to the tents.