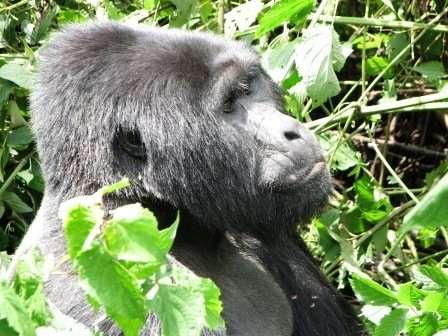 One of the Walleighs’ three most memorable animal adventures in Uganda was trekking the Mountain Gorillas.  One of the national parks protecting the last 500 to 700 Mountain Gorillas in the world, Bwindi Impenetrable Forest is only one kilometer from the border of the very violent Democratic Republic of Congo (DRC), which is also the location of a sanctuary park (the third is in Rwanda). Gorillas don’t recognize borders in the rainforest so they wander across their homeland indiscriminately. In the month before we arrived, DRC guerillas indiscriminately killed the first “habituated” Mountain Gorilla family. The Bwindi Park guides were so upset that several endangered their own lives to retrieve their “friends” bodies from the DRC.

The Walleighs and the Hubers trekked in groups of eight with a guide and two rifled rangers (to protect them from the DRC guerillas (not Gorillas) for a trek up the mountains in Bwindi.  Each group saw a family of habituated Mountain Gorillas from

about 10 feet away for almost an hour. Though one silverback (alpha male) growled and approached Adrian because he was considered too close or made a sudden move, it was hard not to admire these gentle, solemn creatures who just want to munch their plants and wander where they want with their troop. Looking into the brown eyes of these giant primates, each human family felt a clear connection to the gorilla family.

9-Passenger Plane to Get to Bwindi

Flying in a 9-passenger plane over Eastern Africa’s savannahs, jungles and mountains to our treehouse-tents at Buhoma Homestead in Bwindi was fun and enlightening for many reasons.  AirServ charter organization subsidizes its many humanitarian aid flights by doing custom flights like ours. The pilot who was an Afrikaaner (South African of Dutch heritage–for those who’ve not read Power of One…) in his early 30s, allowed Diana (nervous flyer) to sit in the co-pilot seat.  Calm for the actual flight, she did question later why he was reading maps, not holding the steering wheel, and did he really know the way to Bwindi.  And by the way, when flying out from Bwindi, the plane could only take the Walleighs at one time then had to return for the Hubers.  Bwindi’s grass airstrip was too short to allow enough speed and lift to take all nine in the group.  The Walleighs waited at a nearby dirt airstrip for about an hour until the pilot flew in with the Hubers.  Then the full plane took off back to Entebbe.  A true “bush” experience.

As culturally-sensitive tourists, the families agreed to take a “Community Walk” led by a local young man.  Both the village and individual tour guides earn money from these activities which is good.  The tour’s stops were unexpected but interesting and definitely provided insight into the local people.  However, the families and guide hiked for two hours over hill and dale in torrential rains which caused “trails” to become streams, though in retrospect this hike could have been postponed until the weather cleared.  However, the Hubers and Walleighs did meet a witch doctor who could cure HIV/AIDS among many other illnesses AND they learned how to make banana beer and gin—and tasted some. Unfortunately, both families had wet, squishy hiking shoes for the gorilla trek the next morning because nothing dries quickly in a rainforest.

After the Community Walk, the Walleighs and Hubers visited the Forest Pygmy gathering place to meet these diminutive people who were forced from their long-time forest habitat in order to enable the Uganda Wildlife Service to protect the Mountain Gorillas.  As the guide interpreted the Pygmys’ conversations, rituals and dances, it was clear that one noble idea—saving Mountain Gorillas–caused unintended consequences: disrupted food supply and life-style for the Forest Pygmies.  Many of the children had distended bellies indicating lack of protein and balanced nutrition (lots of carbs!). But after participating in and applauding the Pygmy dancers, both families purchased hand-made goods from the women that hopefully enabled these Pygmies to better maintain the health of their families.