South Africa: The Europe of Africa 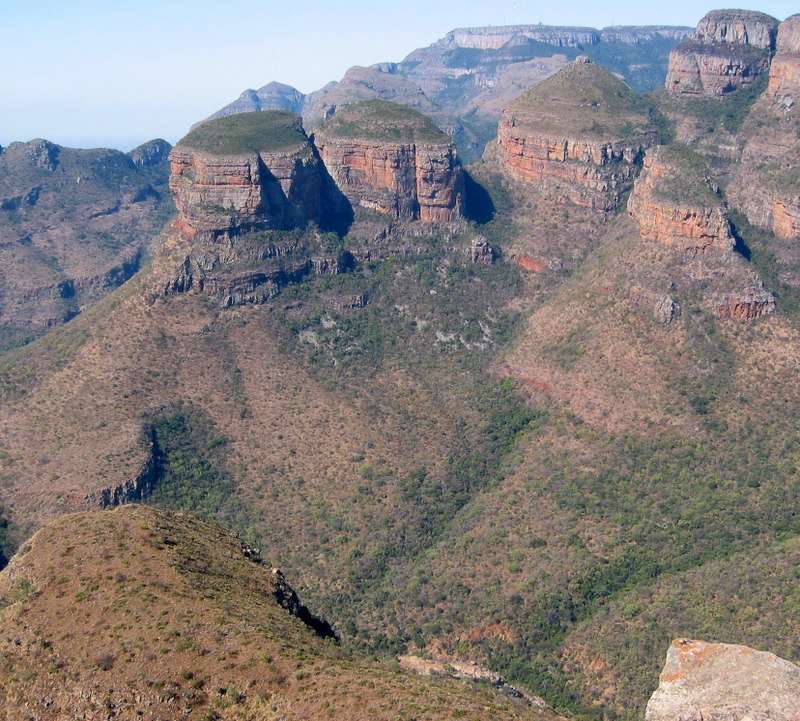 In 2006 while they lived in Swazilandand, the Walleighs visited the Republic of South Africa multiple times and again in 2008 for pleasure. Rick and Wendy visited Kruger Game Reserve on their own and with their son Adrian who came for a visit.  With him, later with a friend, Carolyn, and again with their niece and her fiance who were living there, they spent time Cape Town–as beautiful a city as San Francisco.  They also visited Winelands, the equivalent to Napa-Sonoma Wine Country, several times—on their own, with Carolyn, and with their niece and then-fiancé.  They also toured South Africa’s “Garden Route” which is the coastal route between Cape Town and Durban, but only about half-way to Storms River due to time constraints.

Also please read more below the pictures, including two of Wendy’s Johannesburg mis-adventures, and separately, review the 2006 and 2008 Travel Journals posted.

One of the trips that Rick and Wendy did on their own was driving to Blyde River Canyon in northern South Africa.  Though not nearly as huge as the Grand Canyon, it was colorful, deep, wide and very impressive.

South Africa is the Europe of Africa—But Far, Far Away

For Westerners (or anyone) fearful of visiting “the dark continent,” South Africa feels the most familiar and comfortable.  Its big cities are quite modern. Cape Town is very cosmopolitan.  Driving the Garden Route is like traveling down any European country coast—with penguins.  But it is a long way to fly, particularly from California.  On our trip in 2008, from departing our hotel in Cape Town to arriving at our door in Los Altos was 44 hours.  It’s well worth the visit as long as one plans for two days’ travel at both ends of the journey!

Wendy’s Not So Fun Adventure in Johannesburg

Wendy also visited Johannesburg, one of the world’s most dangerous, crime-ridden cities, several times on TechnoServe business.  She and a colleague were trying to establish Swaziland’s School Age Youth Entrepreneurship (SAYE) program which eventually morphed into JA Swaziland.  Junior Achievement of South Africa was instrumental in enabling the solid grounding of the Swazi youth program. On one of these trips to Jo’burg, Wendy flew in for the day to meet with several organizations. She was supposed to be met by a driver from TechnoServe South Africa then taken to that office for a brief visit before attending her other meetings. Wait for it…wait for it…Wendy and the driver never connected outside the airport. So as to not be further delayed, she asked the so-called airport taxi coordinator for a reliable driver.  AND unfortunately she did not have a cell phone, never mind one with a South Africa SIM card, so couldn’t call the TechnoServe office.  Off Wendy went with the “reliable taxi driver” who drove her round and round trying to find the TechnoServe office.  More bad news: the TechnoServe Swaziland office manager had given Wendy the old South Africa office phone, so after an hour being lost, she directed the driver to take her to her first “real” meeting so she wouldn’t be late.  The driver couldn’t find this downtown Johannesburg location either, but Wendy did have the correct phone for that office.  She forced the driver to call the company for directions but he hung up quickly (phone calls are expensive so that’s why everyone texts!) and still didn’t find the building.  After several more phone calls to that office with the driver being harangued by Wendy, she arrived 30 minutes late to the meeting. Trying to calmly walk into that company, Wendy found that the her prospective “customer” was very concerned because apparently the TechnoServe South Africa office called the TechnoServe Swaziland office to say she’d never shown up, which precipitated Rick and Wendy’s colleagues to hysterically call her next appointment.  Everyone thought she’d been kidnapped or killed in the world’s crime capital. Well, after much reassurance by phone to Rick and the TechnoServe Swaziland staff, Wendy continued on her way with the next couple of meetings then flew home to Mbabane, wiser and vowing to always buy a country’s SIM card for her mobile no matter what!

Traveling by Car between Mbabane and Johannesburg No Picnic Either

Again for establishing the Swaziland youth and another entrepreneurship program, Wendy was driven by her colleagues to Johannesburg several times.  Around that time period, carjacking was rampant in South Africa, especially on less-traveled roads. On one trip coming back to Mbabane from Jo’burg, the TechnoServe Swaziland Country Director (a female) was driving.  Their car seemed to be followed by another darkened car which sped up and slowed down regularly. There were very few cars in either direction, so she and Wendy made their large male colleague sit even taller and be very animated for the last hour of the drive to the Swazi border to scare off any potential criminals.  They did arrive back in Mbabane safe and sound but not calm or collected at all…The moral of this story is not to drive in South Africa after dark or on rural roads, and if one must, do so with at least one large, scary, preferably African male.