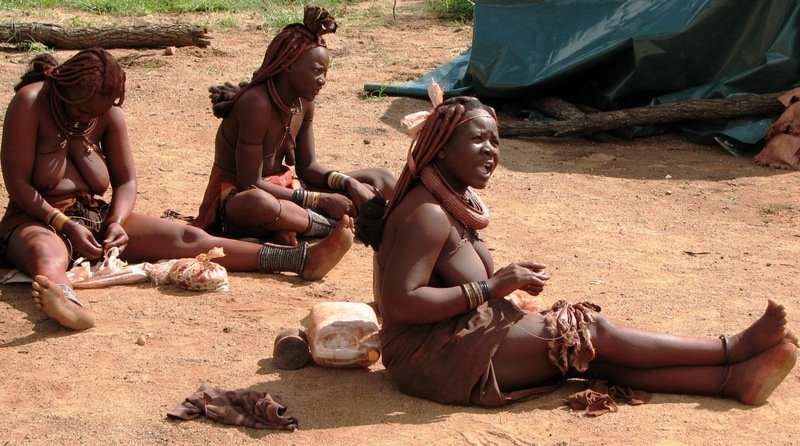 During the many hours in the Land Rover, Rick, Wendy and Carolyn noted that the names of Namibian towns and sites blend the country’s German, Afrikaans/Dutch and British colonial past with indigenous languages. They also observed bizarre road signs, many bad roads, and other strange things along the way.  After leaving Doro !Nawas Conservancy, the Land Rover took Rick, Wendy and Carolyn to several interesting stops.

First they visited a Himba tribal village in Damaraland where the women traditionally do not bathe but each morning take a sweat bath then cover themselves in mud—a talcum-powder-like dusting on their bodies and a thick coating on their hair.  This

mud-talcum powder supposedly acts as sunscreen and moisturizer.  The women also are traditionally topless!  The only man in the Himba village was a guide to explain the customs because the rest of the men were herding cattle in the savannah.

Twyfelfontein means “doubtful fountain” in Afrikaans.  The man who was granted the land didn’t have great luck with farming but he found Bushmen’s rock art on his property that goes back thousands of years.  The carvings are exposed to full sunlight, rain, wind, etc. but they’ve lasted for at least 5,000 years so I guess Namibia preservationists are not worried.

The Skeleton Coast is reputed to be a graveyard of sunken ships but only one could be easily seen.  In general, Rick, Wendy and Carolyn were not overly impressed with either the Skeleton Coast or its main city Swakopmund (German for “Mouth of the Swakop) which is an example of German colonial architecture. It was founded in 1892 as the main harbor for German Southwest Africa and it appeared that some part of its population still spoke German today. Swakopmund is just a pleasant, typical beach resort which is popular in Namibia and southern Africa.

Wendy became obsessed with the many strange signs along the journey indicating various states of the road or elements nearby.  Sometimes the roads were flooded or washed out but they kept going with just a sign indicating “occasionally floods.”  And sometimes rather than fix a dangerous condition, a sign just warns that it’s coming up.  Yet overall the roads were good though not often paved—except leading up to, inside, and departing from cities.  Instead they were hard-pack, well-layered gravel surfaces—when they weren’t flooded or interrupted.