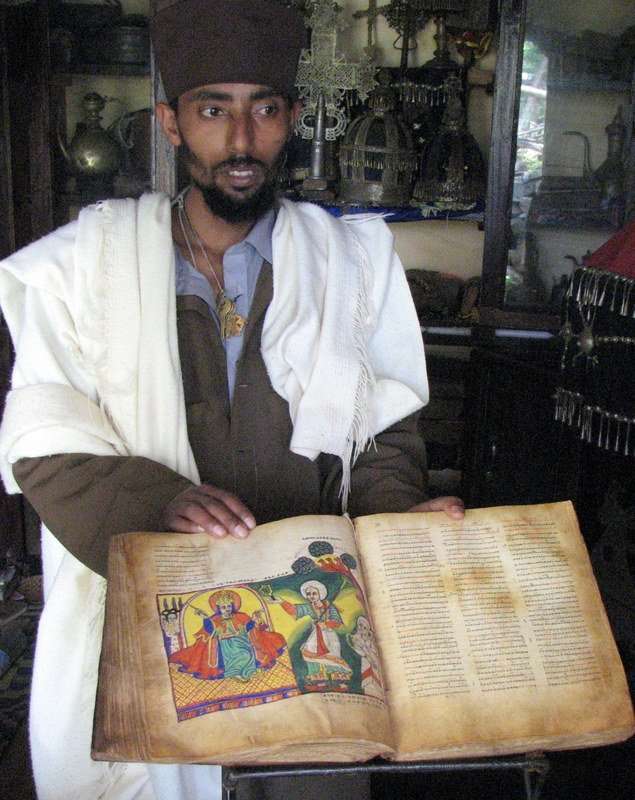 During the 8 days Rick and Wendy spent mid-September 2007 in Ethiopia, their feelings vacillated among guilt, concern, discomfort and fascination.  Ethiopia has the longest, richest, civil and religious history in sub-Saharan Africa yet is one of the poorest countries with an annual per capita income of $120.  “Starving children in Ethiopia” seemed both the sad past and a likely fate for the foreseeable future.

With few exceptions like Addis Ababa, the landscape, populations and lives in Ethiopia look much the same as they have for hundreds of years. Families fish on the Blue Nile River from the same narrow “boats” used by their ancestors. Alongside sparse

car traffic on the paved roads, donkey carts carry people and burdens or people walk for miles supported by their walking sticks. People walk huge distances to the central market on Saturdays to buy Western as well as traditional clothes, grains, spices, beans, fruits and vegetables.

Warned by friends about the dust everywhere in Ethiopia, instead Rick and Wendy encountered pervasive mud everywhere, created by the wettest rainy season in 30 years. Despite the rain and mud, Rick and Wendy toured four famous historic cities. Their first tour stop was Bahir Dar.  There the engorged Blue Nile Falls were brown with silt.  Also they walked to the 700 year old Greek-style monastery, oldest in the Bahir Dar area.  The monastery’s ancient Ethiopian Orthodox monks would be pleased that their hand-painted colorful frescoes of important biblical events were still well-preserved in the 21st century.

Gondar–Home to Ancient Castles and the Remaining Falasha Jews

Gondar was the next historical city stop with old buildings and ruins right next door to the “modern” neighborhood.  Looking at Gondar from a hill, the view could be virtually what Ethiopians saw 1,000 years ago. Rick, Wendy, and their guide walk through King Fasilidas’ ancient compound, including library, castle, wives’ homes, lion house, etc. What hadn’t changed was that people cut the grass and tend the crops by squatting on their haunches, feet flat, using small hand-scythes or other hand-tools.  They also visited his vacation home. When the hustle and bustle of King Fasilidas’ main compound became too stressful, his servants would carry him to his man-made castle-island for a few relaxing days–probably with his concubines.

Also this region is still home to the Falasha Jews. Persecuted in the 1970s and 1980s, about 30,000 Falasha Jews were flown to Israel. The old Falasha village of Wolleka had barely survived as a tourist trap with poor pottery and other crafts.  But Rick and Wendy were able to spend a short time in still-active Beta Yisrael Synagogue and Center. The manager told them that they had just missed 2,000 attendees at the sunset mid-week High Holydays service because they had left to walk the two hours home before dark. There were still 15,000 Falasha Jews in the area who had sold everything, waiting to spend “next year in Jerusalem” with Israel’s help.