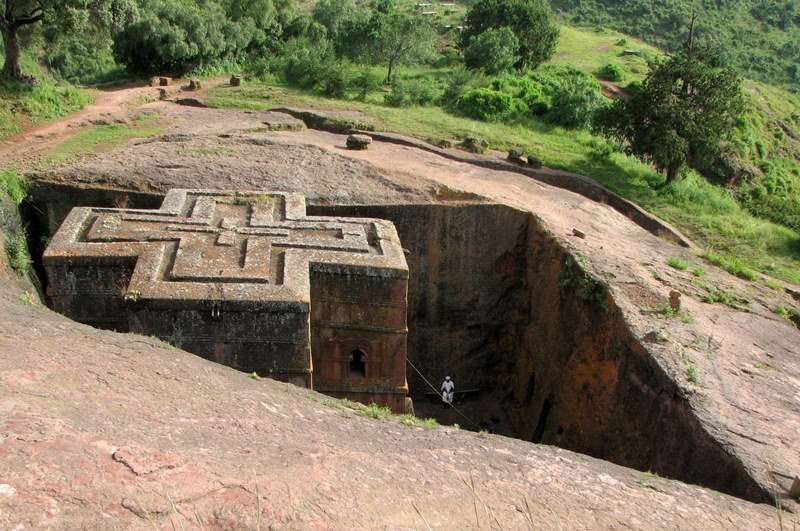 The Walleigh tour’s third stop was Lalibela, the most visited tourist  site in Ethiopia.  It is named after King Lalibela, the first of the Zagwe Dynasty in the 1600s who began the tradition of building churches hewn literally from huge boulders in the earth or on mountain-sides.  Their hotel was called Tukul Village because the “rooms” copied the area’s traditional 2-storey homesteads where the 1st floor is for their livestock and the 2nd is the family’s living quarters.  They saw children learning to read Amharic, Ethiopia’s national language, while their mothers laundered clothes outdoors and carried wood to cook the families’ dinners.

They toured two clusters of churches in Lalibela that were carved from rock.  Some were monolithic or totally free-standing and some, semi-monolithic or partially free-standing.  They learned that the Italian government was trying to offset their guilt at occupying Ethiopia during World War II by building protection around the churches to prevent further degradation. Probably

the most interesting church was St. George (of dragon-fame).  The church was carved in the shape of a Greek cross. Rick and Wendy were able to walk down into the pit surrounding the church, then around and inside it.  They always had to remove their shoes before entering any church, so they hired a shoe-watcher / bearer to ensure than no one stole their shoes while viewing part of Ethiopia’s heritage…

Inside every church was a priest waiting to show visitors special processional crosses used in daily services.  One wore sunglasses to prevent glare from the expected camera flash so he could still see to collect his fee.  A few churches had highly carved walls, painted with saints.  One had a column on which was painted the future of the world according to the Ethiopian Orthodox church, which had to remain covered to prevent panic among church-goers.  Amazingly, Rick and Wendy were able to turn pages of an ancient Bible, probably from the 1300s, written in Ge’ez, the old Abyssinian language.

One of the most memorable experiences–in retrospect–was a mule ride up to the top of the nearby mountain to see a 13th century monastery carved into the rock. The 8 km. trail was so steep and muddy in places that they had to walk, particularly the last 2.5 km.  Riding back down on the mules required gripped knees and feet firmly planted in the stirrups and in places, with the young muleteers holding onto to Wendy who felt like a “dumbass on an ass…”

Their last historical city was Axum, the former capital of the Axum Empire, now Ethiopia.  The Maryam Tsion Church, the most famous institution in Ethiopia, allegedly stores The Ark of the Covenant for safe-keeping in its Holy of Holies. The descendants of King Menelik I, supposedly the offspring of King Solomon of Israel and the Queen of Sheba, placed The Ark there.  We will not dispute here the likelihood of the Jews giving the holiest emblem of their faith to the illegitimate son of their King, but…On the church grounds was also a display of crowns of the Zagwe kings in a locked metal cabinet.  Inside the church they viewed another ancient Ge’ez book darkened brown from human hands’ oil which finally was protected by cloth from human hands.  During Rick and Wendy’s visit, the priests, deacons, and choir were practicing for a service to be shared with 150 members of the Abyssinian Baptist Church of Harlem who were touring the same 4 cities.

Besides having the Ark of the Covenant, the Zagwe Kings built stone stellae (similar to Egyptian obelisks but with more carvings) to honor themselves. During their occupation of Ethiopian in World War 2, the Italians removed to Rome the largest standing stellae. It was returned in 2005, re-assembled, and was supposed to be raised in Axum during the Ethiopian Millennium in 2007…yes, 2007.

The fact that the Ethiopian Millennium was in 2007 symbolizes that Ethiopia is “not quite” in sync with the rest of the world.  Poverty contributes but their religion / legends probably affect the country’s progress as well.  A fascinating civilization but 8 days there was plenty of time.