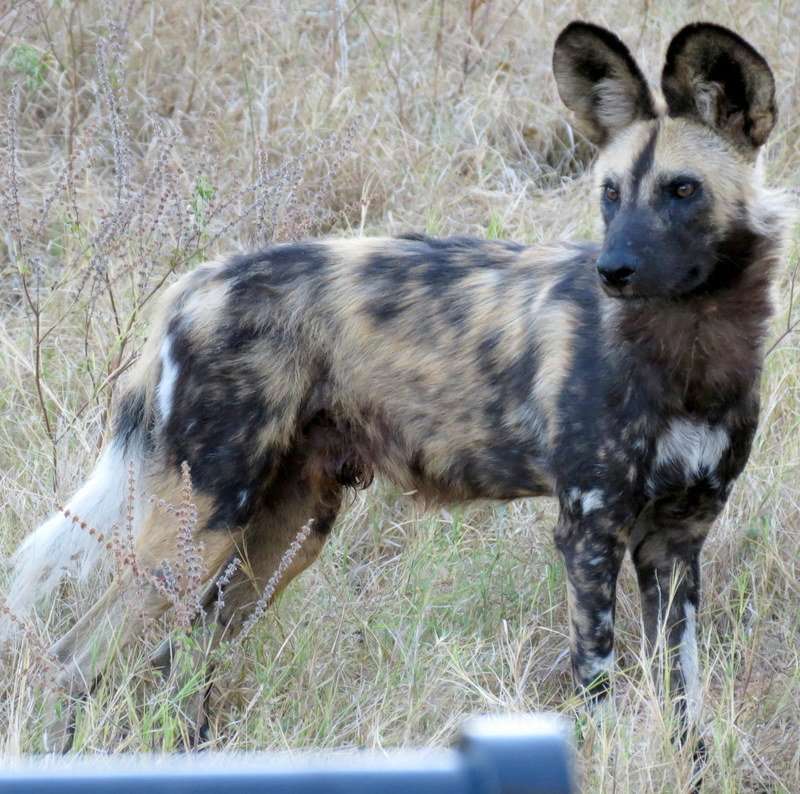 Seeing–sometimes in multiple viewings–African Wild Dogs, Tsessebes, Red Lechwe, Roan Antelopes, Honey Badgers, Bat-Eared Foxes, Black-Backed Jackals and two kills made this Botswana trip unique.  One animal that Rick and Wendy had heard of but never seen in the wild was the Honey Badger.  Their driver/guide for the four days, Ona short for Onaletatha Basemane,  finally spied the elusive animal running through the savannah during the Walleighs’ last morning safari at Kalahari Plains.  Shadowing the mother and baby Honey Badgers were a pair of Bat-Eared Foxes, which the Walleighs had never heard about.  Despite its cutesy name, the Honey Badger is a vicious, ill-tempered predator of eggs, birds, reptiles and whatever else they can catch.*  The foxes hung back from the badgers but awaited

their moment to try to steal the badger’s hard-earned prey or at least grab the remains.  A couple of days later at Vumbura Plains, the Walleighs and guide located Black-Backed Jackals tracking a Honey Badger.  So now Rick and Wendy could call themselves familiar with the previously unfamiliar Honey Badger!

*A PBS documentary on Honey Badgers showed them catching cobra snakes, biting off their heads and eating the rest at their leisure.  When Honey Badgers consume poisonous snakes, most of the time the poison doesn’t affect them because it passes through their tough digestive track.  But if they are nicked by a fang, the poison enters their bloodstream which can knock the badger unconscious or even kill them. No wonder the foxes and jackals trailing them let the badgers do the hard work and then grab the dead prey.

The one time Rick and Wendy had seen African Wild Dogs previous to Botswana was in central Kenya where they appeared to be moving back dots about 1.5 miles away, running after game on the hills.  On the Botswana trip, there were close-up wild dog observations on outings from each camp, sometimes multiple times!

The African Wild Dog is also called Painted Wild Dog because of the wide variety of blotchy browns, tans, black and white on their long-legged, furry, slim bodies.  So while they would not be termed pretty, their behavior was so fascinating that it made them somewhat attractive.  They are very social.  They eat, sleep–often piled on top of each other, and hunt in large packs led by an alpha female as well as male.  If a male wants to create a new pack, rather than challenge the current alpha male to fight (other animals may fight to the death!), the restless male persuades a few females to go off with him and that’s that.  Wild Dogs hunt very strategically, often traveling long distances, then surrounding and tiring their prey.  If a sub-pack finds prey, they will consume the animal in often less than 20 minutes*, return to the main pack, and if the rest of the pack has not been able to find food, the successful ones regurgitate their food to share with their friends.  During one safari, Rick and Wendy observed Wild Dogs awakening from their afternoon nap and preparing for their evening hunt, and then followed the dogs for their initial tracking.  One Wild Dog went around to each sleeping group, licking and almost cuddling to wake them up.  After these experiences, it’s easy to see how domesticated dogs have evolved—and still sometimes have a wild side.

*Arriving after the take-down, Rick and Wendy with their guide watched them consuming a baby Kudu incredibly quickly to ensure that bigger and/or stronger animals would not steal their prey.

Antelopes and related grass-eating friends are categorized as Ungulates.  As a group of safari animals, they are the most viewed, most prolific and the most eaten by predators. Though Rick was particularly eager to see the Sable antelope, this very shy creature remained invisible.  But along with Waterbuck, Bushbuck, Steenbok, Springbok, Greater Kudu, Impala, Oryx, Wildebeest, Hartebeese and of course lots of Giraffes, the Walleighs did see three others they had never seen before: Tsessebe, Red Lechwe and Roan Antelopes—close cousins to the Sable Antelopes but who are slightly less shy.  Very satisfying.

During a morning safari at Vumbura Plains, the driver located four hyenas busily feasting on a baby giraffe while a youngish adult giraffe hovered nearby. It was difficult not to anthropomorphize the animals in this scene: evil-looking hyenas tearing apart an adorable little giraffe with what probably was the young mother or sister frantically trying to figure out what to do.  Very sad and upsetting.  Didn’t like this part of the circle of life.